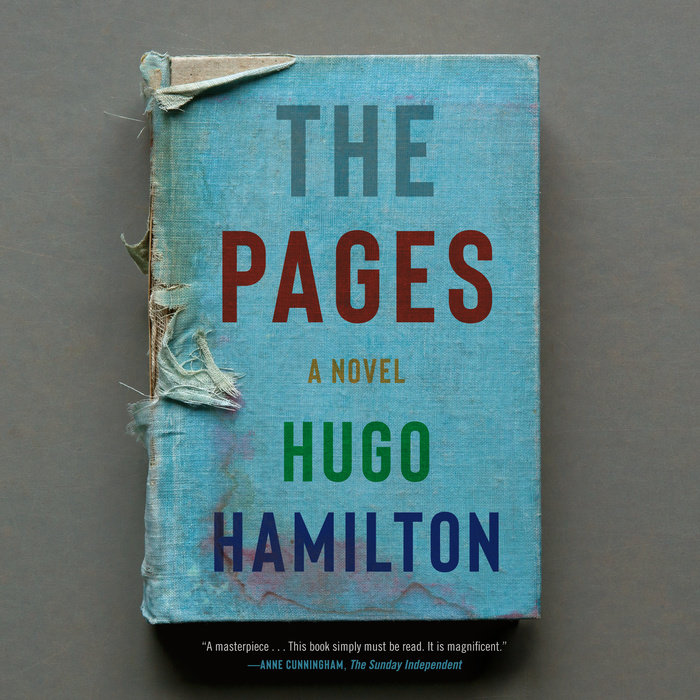 Written by: Hugo Hamilton
Read by: Nicholas Guy Smith
9 Hours and 22 Minutes Imprint: Random House Audio Genre: Fiction - Literary Release Date: February 01, 2022
An entirely original novel in which a book—Joseph Roth's masterpiece Rebellion—narrates its own astonishing life story, from 1930s Germany to the present day, at the heart of a gripping mystery.

One old copy of the novel Rebellion sits in Lena Knecht’s tote bag, about to accompany her on a journey from New York to Berlin in search of a clue to the hand-drawn map on its last page. It is the brilliantly captivating voice of this novel—a first edition nearly burned by Nazis in May 1933—that is our narrator.

Fast-paced and tightly plotted, The Pages brings together a multitude of dazzling characters, real and invented, in a sweeping story of survival, chance, and the joys and struggles of love. At its center are Roth, an Austrian Jewish author on the run, and his wife, Friederike, who falls victim to mental illness as Europe descends into war. With vivid evocations of Germany under Nazism and today, The Pages dramatically illuminates the connections between past and present as it looks at censorship, oppression, and violence. Here is a propulsive, inspiring tale of literature over a hundred years: a novel for book lovers everywhere that will bring a fresh audience to this acclaimed writer.
Read More
A New Yorker Best Book of the Year

“[The Pages] offers comments on the behavior of the other characters as well as on the act of reading, on the force that can be exerted by a seemingly powerless stack of bound pages. If you’ve ever surrendered to the 'reality' of a work of fiction, you’ll know how eloquently this book can speak.” —Alida Becker, The New York Times Book Review

“Ingenious and engaging . . . The book as narrator lives in the real world, aware that its own survival and that of its kind cannot be taken for granted. Like the hero of The Tin Drum or The Good Soldier Schweik, it is a figure of complex and unholy innocence trying to make sense of an encroaching darkness. The idea of story in The Pages is multi-layered and fabulously unstable . . . Marvellous.” —Colm Tóibín, The Guardian

“Perceptive and subtly humorous . . . Mr. Hamilton’s keen eye—which lights equally on landscape and human eccentricity—and his benevolent wit, both so evident is his superb memoir The Speckled People, here deepen and humanize a commendably erudite and earnest novel . . . All the suppleness and precision of Roth’s writing—the way he swoops from the lofty, always punctured, to the quotidian—is wonderfully conveyed in Mr. Hoffman’s graceful translation, as is the beauty of Roth’s imagery.” —Anna Mundow, The Wall Street Journal

“Admirable . . . Hamilton is at his best in several sections about Roth and his wife, Friederike. It’s in these moments that The Pages feels most effortlessly immersive, shrewdest in its psychological insights and most moving . . . [The Pages] builds to an effective thriller-like finale.” —John Williams, The New York Times

“Hamilton, who has drawn on his own Irish-German ancestry in novels such as Dublin Palms and his outstanding memoir The Speckled People, avoids indigestion with a brisk and swift narrative style that echoes Roth’s own. Although ideas of memory, legacy and repetition — the indelible imprints of history — fill The Pages, it moves with a fast and fluid gait . . . With The Pages, as with Roth himself, fable rather than reportage gains the upper hand. It reminds us that, even in an age when people 'live in a rush to forget' (Roth’s words), we must read the book of the past in order to understand the present.” —Boyd Tonkin, Financial Times

“With flair and feeling, Hamilton weaves Roth’s work through his own, in this imaginative act of storytelling.” —Irish Independent

“This book simply must be read, it’s magnificent.” —Sunday Independent

"A powerful, powerful piece of work. A wounded book making its own book. It brings so much to life—Joseph Roth, Chechnya, Germany, the art of writing, the whole notion of banning books, the lips of the past speaking to the present." —Colum McCann, best-selling author of Apeirogon