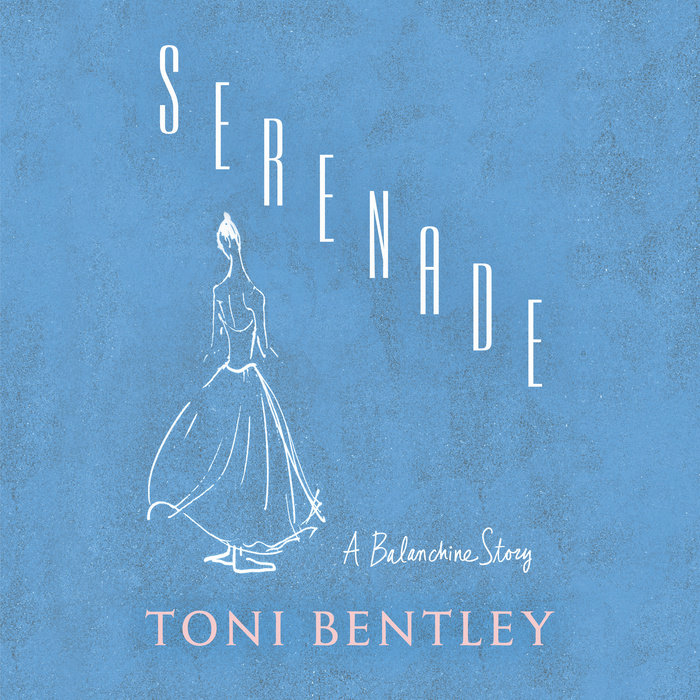 Written by: Toni Bentley
Read by: Leslie Howard & Toni Bentley
10 Hours and 3 Minutes Imprint: Random House Audio Genre: Performing Arts - Dance - Classical & Ballet Release Date: April 12, 2022
Toni Bentley, a dancer for George Balanchine, the greatest ballet maker of the 20th century, tells the story of Serenade, his iconic masterpiece, and what it was like to dance—and live—in his world at New York City Ballet during its legendary era.

"Reading Bentley's Serenade made me feel as alive as I felt on the stage the moment that I fell in love with ballet…. [A] delicate balance of personal memoir, rarefied elegance, history of the arts and pure human interest.”—Misty Copeland, New York Times Book Review

"[A] unique document about one of the greatest ballets ever created…. A beautiful read”—Mikhail Baryshnikov


At age seventeen, Toni Bentley was chosen by Balanchine, then in his final years, to join the New York City Ballet. From both backstage and onstage, she carries us through the serendipitous history and physical intricacies and demands of Serenade: its dazzling opening, with seventeen women in a double-diamond pattern; its radical, even jazzy, use of the highly refined language that is ballet; its place in the choreographer’s own dramatic story of his immigration to the United States from Soviet Russia; its mystical—and literal—embodiment of the tradition of classical ballet in just thirty-three minutes.

Bentley takes us inside the rarefied, intense, and thrilling world Balanchine created through his lifelong devotion to celebrating and expanding female beauty and strength—a world that, inevitably, passed upon his death. An intimate elegy to grace and loss and to the imprint of a towering artist and his transcendent creation on Bentley’s own life, Serenade: A Balanchine Story is a rich narrative by a dynamic artist about the nature of art itself at its most ephemeral and glorious.
Read More
“Written from the heart as much as the head…Serenade: A Balanchine Story, [Bentley’s] brilliant new book-length meditation on Balanchine’s greatest ballet . . . is ultimately far more interesting than just another cultural history: With her rare combination of access to Balanchine and her genuine literary ability . . . she writes with grace and gratitude . . . It’s [her] personal voice that makes this book consistently engaging, and her enthusiasm is catching . . .Bentley is no longer a young girl, but her love for Balanchine has remained true, and with this splendid account, she has honored an incomparable artistic romance.” —Peter Tonguette, National Review

“Beautifully composed, [Serenade] provides a three-dimensional experience of Balanchine’s titular ballet: historical, artistic and personal. Between chapters narrated in the first person—putting readers onstage within the ballet's split-second timing and exact positioning—Bentley provides fascinating background on Balanchine . . . As in all her books, she gives generously of her finely tuned emotions, her experience and her own polished opinions. In short, Serenade: A Balanchine Story has earned a place on the shelf.” —Pointe Magazine

“Bentley, who danced under Balanchine’s direction at the New York City Ballet for a decade in the 1970s and 80s, tells a history that is as vivid and poetic as the dance itself . . . Serenade is about more than the making of a single ballet; it is an introspective nod to the life lessons taught through movement . . . I felt the spirit of the movements through Bentley’s descriptive prose. She weaves in impressive detail about the actual technique of ballet, articulating the dancer’s physical experience for the reader . . . Reading Bentley’s Serenade made me feel as alive as I felt on the stage the moment that I fell in love with ballet: with its grounded fantasy, physical demands, intellectual challenge, structure and beauty . . . Serenade is a book that will delight balletomanes for generations to come; but it will also appeal to those newer to the dance world, with its delicate balance of personal memoir, rarefied elegance, history of the arts and pure human interest.” —Misty Copeland, The New York Times Book Review

"In this beautiful, affecting book . . . an unabashed, heartfelt love letter to Balanchine . . .  Bentley, a poetic writer, eloquently captures the essence of “Serenade” . . . [which] she describes as a map of Balanchine’s soul . . . She dissects this 32-minute ballet in precise, unflinching detail, interweaving reminiscences of her time at the School of American Ballet, which she attended from the age of 10, and life inside the New York City Ballet . . . This moving  book will not only appeal to lovers of ballet, it will make wistful reading for those dancers who will never have the good fortune to work with such a genius as George Balanchine." —Moira Hodgson, Wall Street Journal

"A beautiful read about one of the greatest ballets ever created. A unique document, propulsive and rich in substance. Balanchine's image emerges powerfully, in wonderful detail. Personal, authentic, and revealing about what it took to be one of his dancers." —Mikhail Baryshnikov

"Toni Bentley’s Serenade is in a category all its own—at once an ode to the rigor and passion necessary to create great art and a pointillist description of its making. It is also the story of the embracing yet exacting Balanchine, lending his genius to a young woman’s life. It will consume anyone interested in the generative force that comes from the devoted pursuit of a vocation; you needn't know the difference between a tendu and an arabesque, a prima ballerina and a member of the corps, to be captured by its poetic prose and ingenious structure. This is a transporting reading experience, written with fervor and discernment, and a moving testament to the possibilities that lie within each of us." —Daphne Merkin

“[A] touching and eloquent tribute . . . a rich elegy to Bentley’s dancing career . . . Her command of ballet and its history is breathtaking, and her reverence for Balanchine’s genius is consistently moving. This behind-the-scenes tour of a rarefied world will enchant.” —Publishers Weekly

“Bentley writes as she once danced, with grace and elegance, as she captures the haunting beauty of an art form that exists to be seen and experienced . . . [she] saves her effusive descriptions for the dance, for her very personal experiences in the 10 years she spent with the company (from the mid-1970s to the ’80s), and for the brilliance of Balanchine . . . A touching tribute to a master, this work will delight balletomanes.” —Library Journal

"Effervescent . . .  Serenade endearingly captures Bentley’s passion for ballet . . . A heartfelt tribute to an influential choreographer and one of his crowning achievements." —Kirkus Reviews
Read More