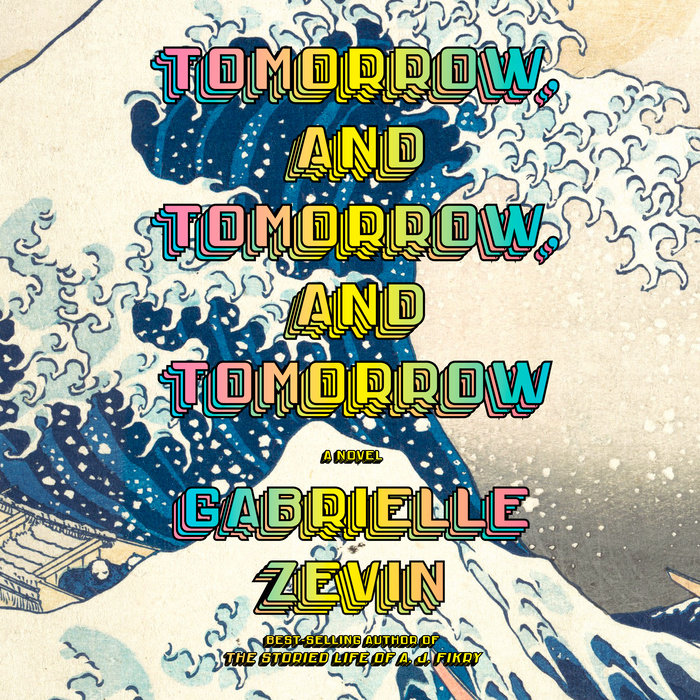 Written by: Gabrielle Zevin
Read by: Jennifer Kim & Julian Cihi
13 Hours and 53 Minutes Imprint: Random House Audio Genre: Fiction - Literary Release Date: July 05, 2022
In this exhilarating novel by the best-selling author of The Storied Life of A. J. Fikry two friends—often in love, but never lovers—come together as creative partners in the world of video game design, where success brings them fame, joy, tragedy, duplicity, and, ultimately, a kind of immortality.

On a bitter-cold day, in the December of his junior year at Harvard, Sam Masur exits a subway car and sees, amid the hordes of people waiting on the platform, Sadie Green. He calls her name. For a moment, she pretends she hasn’t heard him, but then, she turns, and a game begins: a legendary collaboration that will launch them to stardom.

They borrow money, beg favors, and, before even graduating college, they have created their first blockbuster, Ichigo: a game where players can escape the confines of a body and the betrayals of a heart, and where death means nothing more than a chance to restart and play again. This is the story of the perfect worlds Sam and Sadie build, the imperfect world they live in, and of everything that comes after success: Money. Fame. Duplicity. Tragedy.

Spanning thirty years, from Cambridge, Massachusetts, to Venice Beach, California, and lands in between and far beyond, Gabrielle Zevin’s Tomorrow, and Tomorrow, and Tomorrow is a dazzling and intricately imagined novel that examines the multifarious nature of identity, games as artform, technology and the human experience, disability, failure, the redemptive possibilities in play, and above all, our need to connect: to be loved and to love. Yes, it is a love story, but it is not one you have read before.

"Delightful and absorbing...Zevin burns precisely zero calories arguing that game designers are creative artists of the highest order. Instead, she accepts that as a given, and wisely so, for the best of them plainly are...Expansive and entertaining...Dozens of Literary Gamers will cherish the world she’s lovingly conjured. Meanwhile, everyone else will wonder what took them so long to recognize in video games the beauty and drama and pain of human creation."
—Tom Bissell, The New York Times

"Engrossing....Though it contains plenty of nostalgia for the pioneer age of 1990s game design, this isn’t primarily a novel of nerdy insider references....Videogames happen to be the medium by which [Zevin's characters] best express themselves and share in each other’s life."
—Sam Sacks, The Wall Street Journal

"A tour de force... A moving demonstration of the blended power of fiction and gaming....Zevin describes herself as 'a lifelong gamer.' That level of experience could very well have produced a story of hermetically sealed nostalgia impenetrable to anyone who doesn’t still own a copy of 'Space Invaders.' But instead, she’s written a novel that draws any curious reader into the pioneering days of a vast entertainment industry too often scorned by bookworms. And with the depth and sensitivity of a fine fiction writer, she argues for the abiding appeal of the flickering screen."
—Ron Charles, The Washington Post

“Whatever its subject, when a novel is powerful enough, it transports us readers deep into worlds not our own. That's true of Moby Dick, and it's certainly true of Tomorrow, and Tomorrow, and Tomorrow, which renders the process of designing a great video game as enthralling as the pursuit of that great white whale….There are…smart ruminations here about cultural appropriation, given that the game, Ichigo, is inspired by Japanese artist Hokusai's famous painting The Great Wave at Kanagawa….It's a big, beautifully written novel about an underexplored topic, that succeeds in being both serious art and immersive entertainment.”
—Maureen Corrigan, NPR’s Fresh Air

“The story of three brilliant kids who found a videogame company, this book is about so much more—friendship, love, loyalty, violence in America and the magic of invented worlds. Gorgeous.”
—Kim Hubbard, People

“A remarkably absorbing portrait of friendship, identity, and the urge to create something beautiful, whether it be on the page or in pixels….Zevin…clearly knows her way around an RPG, but it's the analog intimacy of Tomorrow's wise, sensitive storytelling that stays.”
—Leah Greenblatt, Entertainment Weekly

"Utterly absorbing...Until I read Tomorrow, and Tomorrow, and Tomorrow, I had never heard of anyone playing games the way my husband and I play games, the way that Sam and Sadie do—on campaign mode but passing the controller back and forth. It takes a shattering lack of ego to play this way, knowing that someone else has the power to make a decision that would change the storyline or garner the skills to play through certain sequences that you’ll never see again. All that matters when you play like this is that you’re moving forward, and you’re together."
—Adrienne So, Wired

“This is a boy meets girl story that is never a romance – though it is romantic… Zevin blurs the lines between reality and play... Tomorrow, and Tomorrow, and Tomorrow is an artfully balanced novel – charming but never saccharine. The world Zevin has created is textured, expansive and, just like those built by her characters, playful.”
—Pippa Bailey, The Guardian

"Two friends, who are often in love, but never lovers, must contend with the fame, joy and tragedy that comes with success after they enter the world of video game design. Spanning three decades and multiple locations, this love story by The Storied Life of A.J. Fikry author is anything but predictable."
—E! News, Tierney Bricker

"If your Insta and #BookTok feeds are filled with pics of this read...there's a reason why....Trust us when we say to give it a shot....You'll follow [Sam and Sadie] over the course of decades, from Massachusetts to California, as they deal with ambition, loss, success, and heartache. We're not crying, you are."
—The Skimm

"Gabrielle Zevin’s potent new novel feature[s] a memorable and oddly stirring meet-cute, with Sam getting the attention of his long-ago childhood friend Sadie by shouting across a crowded train platform that she 'has died of dysentery.' If you picked up on that Oregon Trail reference, you may appreciate this funny, unpredictable story of love and video games set in the late ‘90s, a time when a couple of indie programmers like Sam and Sadie could take the world by storm with nothing but a good idea and a stack of floppy disks."
—Patrick Rapa, The Philadelphia Inquirer

“My #1 book to recommend…Tomorrow and Tomorrow and Tomorrow… [is]  incredible, like The Amazing Adventures of Kavalier and Clay by Michael Chabon meets The Interestings by Meg Wolitzer. It’s about love and friendship and video games.”
—Emma Straub, Cup of Jo

“Is there such a thing as the Great American Gamer Novel? Because if not, I believe Gabrielle Zevin just invented it. She has crafted a brilliant story about life’s most challenging puzzles: friendship, family, love, loss. By turns funny, poignant, wistful, and occasionally devastating, this book absolutely pwned me—in the very best way.”
—Nathan Hill, author of The Nix

"Tomorrow, and Tomorrow, and Tomorrow is a beautifully wrought saga of human connection and the creative process, of love and all of its complicated levels. A gem of a novel, intimate yet sweeping, modern yet timeless. Bits of this book lingered in my head the way ghosts of Tetris pieces continue to fall in your mind’s eye after playing."
—Erin Morgenstern, author of The Starless Sea

"Gabrielle Zevin has written an exquisite love letter to life with all its rose gardens and minefields. With wisdom and vulnerability, she explores the very nature of human connection. This novel, and its unforgettable characters, know no boundaries. To read this book is to laugh, to mourn, to learn, and to grow."
—Tayari Jones, author of An American Marriage

"Tomorrow and Tomorrow and Tomorrow is the sort of book that comes around once in a decade—a magnificent feat of storytelling. It is a book about the intersection between love and friendship, work and vocation, and the impossible and relentless pull of our own west-bound destinies. Gabrielle Zevin is one of our greatest living novelists, and Tomorrow just may be her magnum opus. Remarkable."
—Rebecca Serle, author of In Five Years

“A polished, thoughtful novel about loyalty and love that, like the best video games, grows more absorbing the further you venture into it."
—Connie Ogle, The Star Tribune

“[A] brilliant tale of identity, human connection, and yes, love in all of its myriad of forms.”
—Sabienna Bowman, PopSugar

“If you’re into video games, this extraordinary coming-of-age/love story/social novel has your name on it. The story follows terrific characters from youth into their adult lives as founders of a successful gaming company. Even if you couldn’t care less about video games, Zevin’s signature narrative charms will still keep you riveted.”
—Marion Winik, Newsday

"Yes, it is a love story, but it is not one you have read before. Taking place over 30 years, this dazzling and intricately imagined novel by Gabrielle Zevin examines the nature of identity, disability, failure, and above all, our need to connect. Tomorrow, and Tomorrow and Tomorrow is one of our most anticipated books of the summer and we can’t wait for you to read it."
—B&N Reads

“[This] novel explores themes of identity, disability, play and love in an unforgettable and richly imaginative way.”
—She Reads

"Zevin… returns with an exhilarating epic of friendship, grief, and computer game development…. Zevin layers the narrative with her characters’ wrenching emotional wounds as their relationships wax and wane... Even more impressive are the visionary and transgressive games… This is a one-of-a-kind achievement.”
—Publishers Weekly, starred

“Riveting… Zevin has written the book she was born to write, a love letter to every aspect of gaming…Zevin’s delight in her characters, their qualities, and their projects sprinkles a layer of fairy dust over the whole enterprise…Sure to enchant even those who have never played a video game in their lives, with instant cult status for those who have.”
—Kirkus, starred

"Zevin creates beautifully flawed characters often caught between the real and gaming worlds, which are cleverly juxtaposed to highlight their similarities and differences. Both readers of love stories and gamers will enjoy. Highly recommended."
—Library Journal, starred

"It’s impossible to predict how, exactly, you’ll fall in love with Gabrielle Zevin’s novel Tomorrow, and Tomorrow, and Tomorrow, but it’s an eventuality you can’t escape... Her artistic, inclusive world is filled with characters so genuine and endearing that you may start caring for them as if they were real. Above all, her development of Sam and Sadie’s relationship is pure wizardry; it’s deep and complex, transcending anything we might call a love story. Whether you care about video games or not is beside the point. Tomorrow, and Tomorrow, and Tomorrow is the novel you’ve been waiting to read."
—Chika Gujarathi, BookPage
Read More

Books That Play: Listen in the Garden 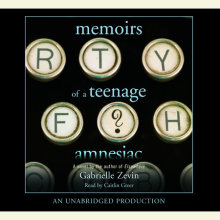 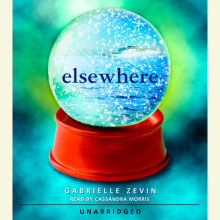