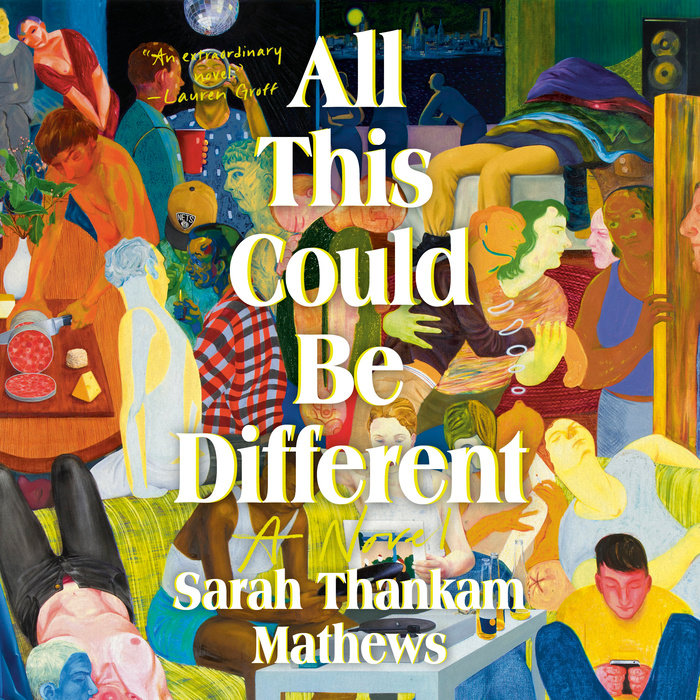 “One of the buzziest, most human novels of the year…breathless, dizzying, and completely beautiful.” —Vogue

“Dazzling and wholly original...[written] with such mordant wit, insight, and specificity, it feels like watching a new literary star being born in real time.” –Entertainment Weekly

From a brilliant new voice comes an electrifying novel of a young immigrant building a life for herself—a warm, dazzling, and profound saga of queer love, friendship, work, and precarity in twenty-first century America

Graduating into the long maw of an American recession, Sneha is one of the fortunate ones. She’s moved to Milwaukee for an entry-level corporate job that, grueling as it may be, is the key that unlocks every door: she can pick up the tab at dinner with her new friend Tig, get her college buddy Thom hired alongside her, and send money to her parents back in India. She begins dating women—soon developing a burning crush on Marina, a beguiling and beautiful dancer who always seems just out of reach.

But before long, trouble arrives. Painful secrets rear their heads; jobs go off the rails; evictions loom. Sneha struggles to be truly close and open with anybody, even as her friendships deepen, even as she throws herself headlong into a dizzying romance with Marina. It’s then that Tig begins to draw up a radical solution to their problems, hoping to save them all.

“Mathews has a big heart and a sharp tongue…[and] a wonderful eye for the things that make friendship and community just as valuable as romance.” —The New York Times Book Review

“What fuels [All This Could Be Different] is love, a force Mathews portrays not as a panacea [...] but as an instrument of change.” —The New Yorker

“Both lyrical and page-turning . . . All This Could Be Different, in which the lives of a group of millennials become fascinatingly entangled [...] offers us a panoramic view of mingled desires, fears, and joys that will be familiar to readers of Eliot and Austen, but [Mathews] does them one better: her novel is about an underrepresented first-generation immigrant, and it’s incredibly gay.” —Los Angeles Review of Books

“A darkly witty and finely wrought exploration of the struggle to embrace one's identity, this debut also illuminates the hardships of immigrant life, the elusiveness of lasting romantic love—and ultimately the joy and belonging that can come from a 'family' of friends.” —People

“This bold and wide-ranging novel sets its sights on what it really means to be 'okay' . . . [asking] questions that have consumed innumerable 20-somethings . . . Mathews expertly captures and elevates the position of being a young queer person in the post-recession U.S. with many more questions than answers.” —Emma Spector, Vogue

“Engrossing . . . a moving immigrant’s story and a heartfelt queer love story that tackles socioeconomic issues with nuance . . . its themes are universally relatable at any age.” —Rolling Stone

“Sneha’s equally vulnerable and cutting narration of new friendships, new romances, and generally figuring it out captures the queer, immigrant experience unlike any other.” —Harper's Bazaar

“A wholly original exploration of queer friendship and the demanding, incredible realities of communal living, Sarah Thankam Mathews convinces the reader that yes, maybe all this could be different after all.” —Vulture, “The Best Books of 2022”

“[What] initially blew me away was the clarity of Mathews’ writing and the accuracy with which she describes experiences I’d previously taken for granted. Her writing is funny, incisive . . . This book gave me a lot to ponder, but ultimately left me hopeful.” —David Vogel, Buzzfeed

“Radiant . . . Mathews’ writing is daring, sharp, and authoritative. She’s a master in building rich characters that are imperfect and complicated, charismatic and lovable. At times, the prose felt luxurious and welcoming in the way that the scent of your favorite candle might slowly fill up an ever-expanding room.” —Vox

“[One of] our most anticipated releases of the season . . . [written] with tenderness and exhilaration.” —Elle

“All This Could Be Different is easily a contender for Book of the Year.” —Observer

“[A] novel so good I was torn by the incompatible desires to never set it down and never finish it . . . [Mathews’] skillful alternating between lush imagery and straightforward, plain language makes All This Could Be Different pulsate . . . A masterclass in character development . . . it is perhaps the greatest depiction of what chosen family really means without ever explicitly using those words.” —Kayla Kumari Upadhyaya, Autostraddle

“[All This Could Be Different] is funny, poignant, and hits every nail on the head when it comes to dialogue and the nuances for friendship, work, sex, healing, and ultimately growing up.” —Shondaland

“[A] dazzling debut . . . There is so much here to chew on: economic and food insecurity, tenants’ rights, coming into one’s own, queer romance, immigration, and the vitality of friendship. All This Could Be Different is an epic and beautiful first novel from a writer to watch.” —them.

“A beautiful, authentic rendition of the brown queer experience and immigrant dynamics, All This Could Be Different is a love letter to these communities. It is a novel of possibilities, and a novel bound to steal your heart." —Electric Literature

“[A] captivating debut novel . . . [All This Could Be Different] will sneak up on you and grab your heart.” —San Francisco Bay Times

“[A] bildungsroman, an immigrant story, a hero’s journey not to be missed.” —Lit Hub

“With stunning prose and metaphors that made me literally gasp, Mathews unpacks the impossible mental task, especially for folks with many intersecting identities, of distilling a lifetime of experiences and traumas into one concrete personality, all while trying not to be crushed under the psychological weight of capitalism. The cast of side characters, just as loving and charismatic as they are selfish and stunted, are so richly developed you can't help but recognize them. A deceptively readable (and often hilarious) tale full of sharp meditations on what it means to be a young adult in the modern world.” —Buzzfeed, “Best Books Releasing in August”

“All This Could Be Different captures the authentic adventure of an immigrant: how she manages to forge a bond with the US through love and community. Sarah Thankam Mathews’s tender and beautiful prose renders the story unforgettable.” —The Millions

“Moving . . . a searing portrait of the joys and pains of being a young adult in turbulent times.” —Debutiful

“I deeply appreciated Mathews’s choices in this book—toward nuance, toward lyricism that elevates queer emotions, toward being present in the complex reality of straddling cultural expectations between family and community . . . Mathews is a great writer, and does the complexities justice.” —S. Bear Bergman, Xtra Magazine

“Perhaps it's too soon to say which books we'll look back on in 50 years as the ones that defined a generation, but [All This Could Be Different], a close-to-perfect coming-of-age romp, is surely a contender. Bitingly funny and sweetly earnest, it's one of those rare novels that feels just like life . . . [Mathews] captures some unnamable, essential thing about being a 20-something struggling through work and love and late-stage capitalism . . . In the manner of books that stay with you forever, All This Could Be Different is a singular story that extends beyond itself . . . [A] funny, vibrant, heartbreaking book.” —BookPage (starred review)

“Mathews achieves what so often seems to be impossible: a deeply felt 'novel of ideas' . . . [She] somehow tackles the big abstractions—capitalism, gender, sexuality, Western individualism, etc.—while at the same time imbuing her characters with such real, flawed humanity that they seem ready to walk right off the page. Rarely is dialogue rendered so accurately . . . Mathews can be deeply moving at the same time that she is funny; she dips into slang in a way that feels lyrical and rhythmic . . . beautifully written, lusciously felt, and marvelously envisioned. Resplendent with intelligence, wit, and feeling.” —Kirkus (starred review)

“Sneha is a magnetic teller of her tale of finding love, growing up, and summoning the power to change—and choose—her life. Kindred to Brandon Taylor's stellar Real Life, this novel burrows deep.” —Booklist (starred review)

“Mathews’s poignant and illuminating debut centers on an aloof 22-year-old Indian immigrant whose first job out of college brings her to the Midwest . . . Mathews [charts] the wonders of community-building, delving into the strenuous work that goes into sustaining meaningful friendships as well as the heartbreak that ensues when connections are fractured by dishonesty. [A] thoughtful exploration of how the legacies of trauma make an impact.” —Publishers Weekly

“All This Could Be Different is an extraordinary novel, spiny and delicate, scathingly funny and wildly moving. Sarah Thankam Mathews is a brilliant writer, one whose every ringing sentence holds both bite and heart.” —Lauren Groff, author of Matrix

“Some books are merely luminous—this one is iridescent: with joy and pain, isolation and communion, solemnity and irreverent humor. Even the title has twin meanings. ‘All this could be different’ is a sorrowing observation of our contemporary precarity, but ‘All this could be different’ is equally—and ultimately—a declaration, an electrifying act of resistance.” —Susan Choi, author of Trust Exercise

“Battle cry and love song both, All This Could Be Different is an ode—tender, sexy, and smart—to coming of age in turbulent times. As Sneha navigates the hilarious and deadly serious work of being a good friend, lover, daughter, immigrant, adult, queer woman, and worker under late stage capitalism, what emerges is a portrait of a woman determined to live her life to its brim--no matter what. Sarah Thankam Mathews writes like a blaze, and this book will remind you what it is to be young and powerfully alive.” —C Pam Zhang, author of How Much of These Hills is Gold

“Sarah Thankam Mathews’ prose is undeniable and hyper attuned to the terrible privacy of the mind. In All This Could Be Different, she captures the sneaky, unsayable parts of longing and writes sharply about the long shadow of family.” —Raven Leilani, author of Luster

“Everything about this novel is perfect. It’s about friendship and work, two things which so rarely get treated with such nuance and care in fiction. Sneha’s narrative voice is both snarky and warm. Every scene comes alive. If you’re looking for your next great queer Millennial read, this is it.” —BookRiot

“Sharply observed and deeply empathetic, All This Could Be Different is a gorgeous story of dreaming and daring against the odds. I loved these flawed, funny friends and I rooted for them, and as I raced toward the end I felt an ache in my chest, missing them already.” —Dawnie Walton, author of The Final Revival of Opal & Nev

“Sarah Thankam Mathews’ All This Could Be Different is an exquisite debut. Mathews’ is a completely original voice that is, by turns, fierce, witty, musical, poignant, and, yes, deeply sexy. Simultaneously a tender portrait of chosen family, a stunningly rendered queer romance, and a keen reflection on work in a monstrous economy, this novel also thrums with a persistent, private hope for another, better world. It is the kind of book one should read not only to be entertained or impressed, but also to feel less alone.” —Sanjena Sathian, author of Gold Diggers
Read More

New Audiobook Releases for the Dog Days of Summer 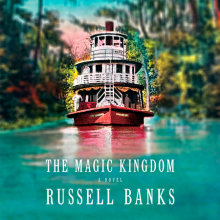 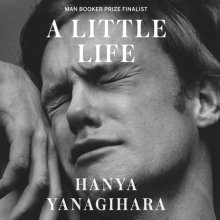 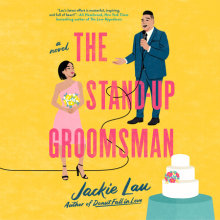