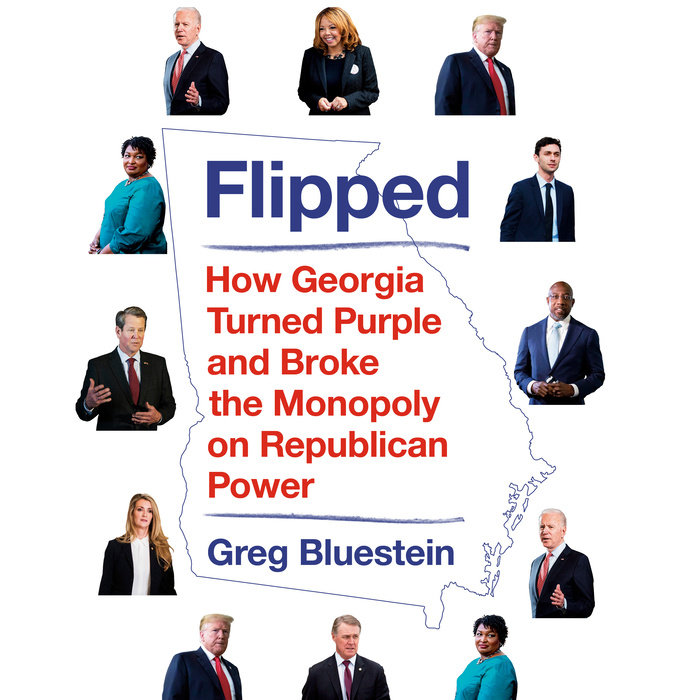 Flipped is the definitive account of how the election of Reverend Raphael Warnock and Jon Ossoff transformed Georgia from one of the staunchest Republican strongholds to the nation’s most watched battleground state—and ground zero for the disinformation wars certain to plague statewide and national elections in the future. The Atlanta Journal-Constitution reporter Greg Bluestein charts how progressive activists and organizers worked to mobilize hundreds of thousands of new voters and how Joe Biden’s victory in Georgia may shape Democratic strategy for years to come. He also chronicles how Georgia’s Republicans countered with a move to the far right that culminated in state leaders defying Donald Trump’s demands to overturn his defeat.

Bluestein tells the story of all the key figures in this election, including Stacey Abrams, Brian Kemp, David Perdue, Jon Ossoff, Raphael Warnock, and Kelly Loeffler, through hundreds of interviews with the people closest to the election. Flipped also features such fascinating characters as political activist turned U.S. congresswoman Nikema Williams; perma-tanned baseball star turned lieutenant governor Geoff Duncan; and the volunteers and voters who laid the groundwork for Biden’s triumphant Georgia campaign.

Flipped tells a story that will resonate through the rest of the decade and beyond, as most political experts see Georgia headed toward years of close elections, and Democrats have developed a deep bench of strong candidates to challenge a still deeply entrenched GOP. Interest in the state only figures to increase if and when Stacey Abrams mounts a rematch against Governor Brian Kemp in the fall of 2022 and Trump promotes his own slate of candidates against Republicans who stood against his efforts to overturn Georgia’s election.
Read More
"A richly detailed account. . . . Enriched by Bluestein’s impressive access to insiders on both sides of the aisle, this is a valuable study of a state likely to play a big role in national politics for years to come."
—Publishers Weekly

“In Flipped, Greg Bluestein delivers a brilliantly reported romp through the crucible of Georgia’s ultra-competitive politics. Full of juicy characters, animating details and incisive analysis, Flipped is more than a lively look at the players and issues reshaping American politics—it is a playbook for the electoral battlefield in bellwether states in 2022, 2024 and beyond.”
—Jonathan Allen, #1 New York Times bestselling author

"If a single state has told the story of American politics in the last 10 years, it has been Georgia. And if a single reporter has owned that beat, it’s been The Atlanta Journal-Constitution’s Greg Bluestein. With Flipped, Bluestein has turned Georgia’s years-in-the-making political transformation into a page-turning political thriller, with all of the drama, characters, and plot twists you usually find in a whodunnit mystery. It’s the kind of book you call a friend to say, 'Listen to this!' after reading one insider account after another (and is something I did many times.). With Bluestein's deep sourcing, original reporting, crackling storytelling, and pinpoint analysis, Flipped is the definitive account of what just happened in Georgia politics—and why it will matter to the rest of the country for years to come."
—Patricia Murphy, political columnist for the Atlanta Journal-Constitution

“Greg Bluestein offers us a play-by-play of the political Superbowl that took place in Georgia, by pulling back the curtain, and giving us an exclusive behind the scenes look at the power players across the state. . . . He not only has the gift of storytelling, but also the journalistic integrity and instinct that is lacking in so many reporters today. This book is a must read for political junkies, reporters, strategists and party elites who think they know it all until Election Day rolls around and stuns a state and a nation.”
—Lori Geary, news anchor and host of “The Georgia Gang”

"Greg Bluestein deftly tells the story of Georgia at a political inflection point through the results of 2020 and key moments that paved the way during prior election cycles. Not only are terrific writing and storytelling on display in Flipped, but Bluestein's ability to build and navigate relationships on both sides of the aisle are essential to this brilliant piece of political journalism. This is a must read to understand the landscape of a changing Georgia."
—Jeff Romig, author and podcast host

“In 2022, hundreds of journalists will parachute into Georgia to determine whether our state has morphed into a truly purple battleground, or if Joe Biden’s presidential victory in 2020 was just a violet blip. Greg Bluestein’s Flipped, a buffet of new insight and facts, is the book that in-coming reporters and columnists will need to understand how Georgia became the center of '22 national politics. You need to read it, too.”
—Jim Galloway, former political columnist for the Atlanta Journal-Constitution
Read More