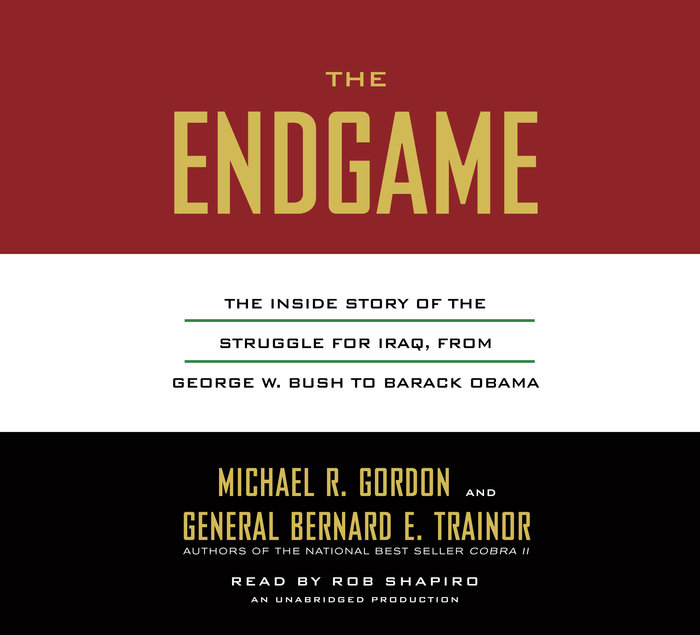 Eagerly anticipated in the wake of their national best seller Cobra II (“The superb, must-read military history of the invasion of Iraq”—Thomas L. Friedman), The Endgame is Michael R. Gordon and General Bernard E. Trainor’s most ambitious and news-breaking book to date. A peerless work of investigative journalism and historical recreation ranging from 2003 to 2012, it gives us the first comprehensive, inside account of arguably the most widely reported yet least understood war in American history—from the occupation of Iraq to the withdrawal of American troops.

Prodigiously researched, The Endgame is not only based on an abundance of highly classified, still-secret government documents but is also brilliantly informed by access to key figures in the White House, the military, the State and Defense departments, the intelligence community, and, most strikingly, by extensive interviews with both Sunni and Shiite leaders, key Kurdish politicians, tribal sheikhs, former insurgents, Sadrists, and senior Iraqi military officers, whose insights about critical turning points and previously unknown decisions made during the war have heretofore been conspicuously missing from the media’s coverage of it.

The Endgame is riveting as a blow-by-blow chronicle of the fighting. It is also relentlessly revealing, as it deftly pieces together the puzzle of the prosecution of American, Iraqi, and Iranian objectives, and the diplomatic intrigue and political struggle within Iraq since the American invasion.

“Likely to stand for decades as the definitive account of the Iraq war. . . . [A] tour de force of contemporary history. . . . The best tribute we can pay to the Iraq veterans is to remember what they did, and that is precisely the achievement of [The Endgame].”
—The Wall Street Journal

“Meticulous. . . . Persuasive. . . . Should be required reading. . . . Thanks to the authors’ extraordinary research and sobriety, the accumulation of one well-documented fact after another is compelling. . . . ‘Regime change’ means not only getting rid of a bad regime but also finding a way to replace it with something better. The Endgame shows just how hard that process can be—and, by implication, how crazy it is to start a war without good plans for how to finish it”
—The New York Times

“Ambitious. . . . A well-researched, highly critical look at U.S. policy in Iraq. . . . Ultimately, The Endgame invites the question whether President Obama threw his support behind the wrong war.”
—Newsweek/The Daily Beast

“The devil of the story is in the details, and the authors do a superb job of providing them. . . . Likely to be considered definitive for some time to come.”
—The Washington Times

“A solid chronicle of the Iraq War, emphasizing military maneuvers and Iraqi participation at all levels. . . . A deliberate, chronological construction of events. . . . A straightforward, evenhanded account of the nine-year slog that began as a ‘war of choice’ and became ‘a war of necessity.’“
—Kirkus Reviews

“A fantastic book . . . highly anticipated and a must-read on this subject.”
—Joe Scarborough, MSNBC’s “Morning Joe”

“Gordon is considered by many to be the best reporter on the Iraq war . . . his long-awaited book is likely to shed new light particularly on the last half-decade of U.S. involvement.”
—Foreign Policy

“If you want to know about this painful and critical episode of American history, you have to read these books.”
—James Rosen, Fox News

“Gordon and Trainor’s most ambitious and news-breaking book to date. A peerless work of investigative journalism and historical recreation ranging from 2003 to 2012, it gives us the first comprehensive, inside account of arguably the most widely reported yet least understood war in American history.”
—Frogen Yozurt Online Magazine
Read More 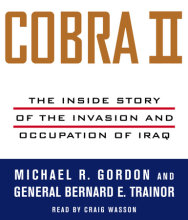