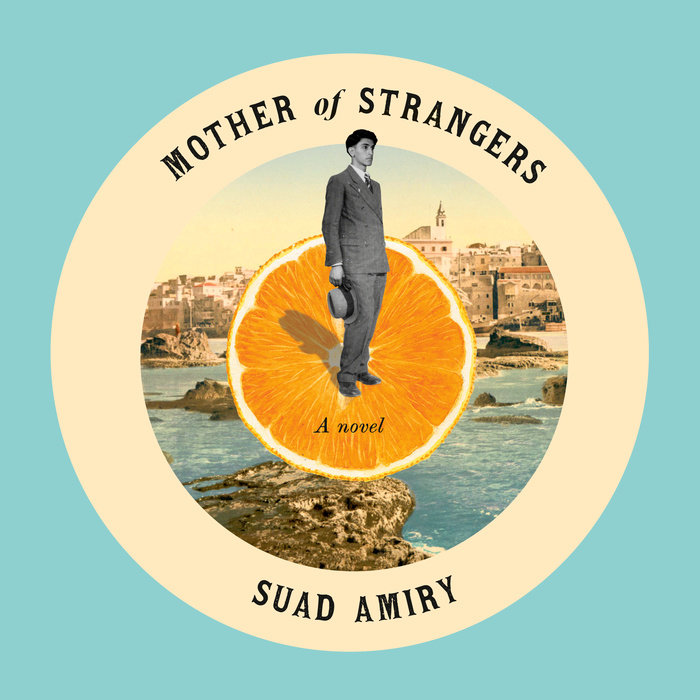 Written by: Suad Amiry
Read by: Amin El Gamal & Lameece Issaq
7 Hours and 51 Minutes Imprint: Random House Audio Genre: Fiction - World Literature - Middle East - General Release Date: August 02, 2022
Set in Jaffa in between 1947 and 1951, this “fable-like historical novel of young love ... darkly humorous and touching” (Oprah Daily) is based on a true story during the beginning of the destruction of Palestine and displacement of its people.

Based on the true story of two Jaffa teenagers, Mother of Strangers follows the daily lives of Subhi, a fifteen-year-old mechanic, and Shams, the thirteen-year-old student he hopes to marry one day. In this prosperous and cosmopolitan port city, with its bustling markets, cinemas, and cafés on the hills overlooking the Mediter­ranean Sea, we meet many other unforgettable charac­ters as well, including Khawaja Michael, the elegant and successful owner of orange groves above the harbor; Mr. Hassan, the tailor who makes Subhi’s treasured English suit, which he hopes will change his life; and the very mischievous and outrageous Uncle Habeeb, who insists on introducing Subhi to the local bordello.

With a thriving orange export business, Jaffa had always been a city welcoming to outsiders—the “Mother of Strangers”—where Muslims, Jews, and Christians lived peacefully together. Once the bombardment of the city begins in April 1948, Suad Amiry gives us the grim but fascinating details of the shock, panic, and destruc­tion that ensues. Jaffa becomes unrecognizable, with neighborhoods flattened, families removed from their homes and separated, and those who remain in constant danger of arrest and incarceration. Most of the popula­tion flees eastward to Jordan or by sea to Lebanon in the north or to Egypt and Gaza in the south. Subhi and Shams will never see each other again.

Suad Amiry has written a vivid and devastating ac­count of a seminal moment in the history of the Middle East—the beginning of the end of Palestine and a por­trait of a city irrevocably changed.
Read More
A BEST BOOK OF THE YEAR from NPR

“A captivating novel about love amid warfare . . . a story as sobering as it is entertaining.”
—The Hudson Review

“Toward the beginning of this novel, Subhi – “the best mechanic in town,” despite being only 15 – is called to fix the well of a local citrus magnate. When he arrives at the grove, he is taken aback by how different the city of Jaffa looks from way up high; how seeing it from this vantage point must affect one’s hopes, fears, politics and loyalties. That sense of perspective-shifting carries throughout the book. The characters force readers to think about how our desires change when our settings do and how expansive (or limited) our sense of reality might be.”
—“Books We Love 2022,” NPR

“[Mother of Strangers] invites readers to consider the human cost of the ongoing, tragic conflict in the Middle East. As always, the past is not past.”
—Washington Independent Review of Books

“Based on a true story, Mother of Strangers is a fable-like historical novel of young love . . . Darkly humorous and touching . . . We’re shown this entire messy, glorious universe that existed before war rained down.”
—Oprah Daily

“A powerful story of love, loss, and the destruction of a nation.”
—Booklist, starred review

“I was bedazzled by Mother of Strangers. How extraordinarily brave to weave a story about the destruction of one’s city, the displacement of family—separating lovers young and old—and the beginning of the end of Palestine. I loved that Suad Amiry based her novel on a true story. I loved the humor as I clutched my heart.”
—Hanan al Shaykh, author of Beirut Blues

“Mother Of Strangers is a passionate and a deeply moving story of the price Palestinians paid for the creation of Israel.”
—Michael Palin, author, actor, and member of Monty Python
Read More