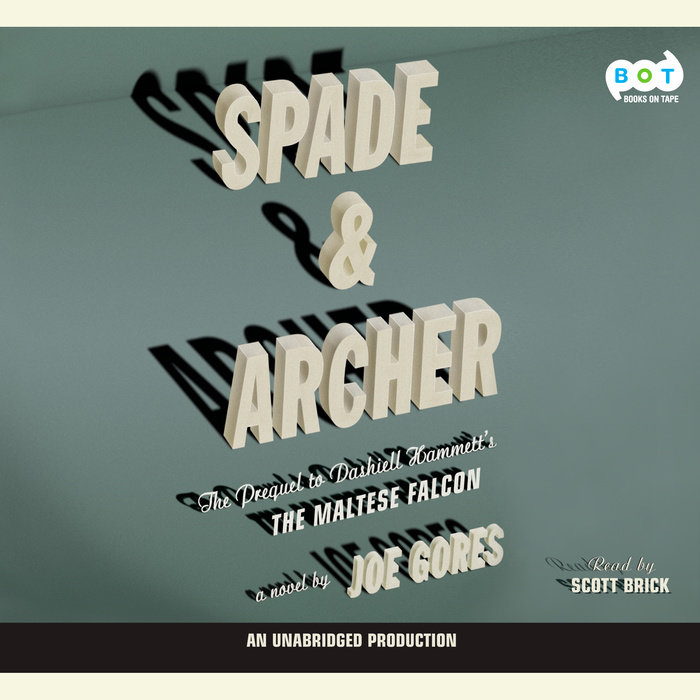 When Sam Spade gets drawn into the Maltese Falcon case, we know what to expect: straight talk, hard questions, no favors, and no way for anyone to get underneath the protective shell he wears like a second skin. We know that his late partner, Miles Archer, was a son of a bitch; that Spade is sleeping with Archer’s wife, Iva; that his tomboyish secretary, Effie Perine, is the only innocent in his life. What we don’t know is how Spade became who he is. Spade & Archer completes the picture.

1921: Spade sets up his own agency in San Francisco and clients quickly start coming through the door. The next seven years will see him dealing with booze runners, waterfront thugs, stowaways, banking swindlers, gold smugglers, bumbling cops, and the illegitimate daughter of Sun Yat-sen; with murder, other men’s mistresses, and long-missing money. He’ll bring in Archer as a partner, though it was Archer who stole his girl while he was fighting in World War I. He’ll tangle with a villain who never loses his desire to make Spade pay big for ruining what should’ve been the perfect crime. And he’ll fall in love—though it won’t turn out for the best. It never does with dames . . .

Spade & Archer is a gritty, pitch-perfect, hard-boiled audiobook—the work of a master mystery writer—destined to become a classic in its own right.
Read More
“Gores delivers the streets gritty, the action hard-boiled and the feel of late-night mist seeping into your bones. . . . Hammett would have approved.” —San Francisco Chronicle

“A welcome addition to the Sam Spade legend.” —Free Lance-Star

“Gores is far and away the best candidate to pull off such a risky endeavor . . . [He] knows Falcon forward and backward . . . Spade & Archer [is] never less than entertaining.” —Los Angeles Times

“A prequel that honors and enhances the legendary volume it enshrines. . . . This novel feels pre-aged more than dated—as vintage Hammett often does to today’s readers. . . . This is a very fine novel. Respectful, but too mindful of the source to be reverent—Spade & Archer exalts Dashiell Hammett, codifies his life’s work and decorously affirms the master’s serious intent.” —James Ellroy

“Gores’s voice is a pleasure.  If it isn’t seamless ventriloquism, it’s the sound of a writer professing his love for the master who came before.” —Newsday

“Absorbing. . . . Readers with an appetite for Hammett can feed it with this new novel . . . A fine re-imagining.” —Cleveland Plain Dealer

“Gores does a bang-up job . . . [He] knits together a clever and appropriate back story for the iconic detective that makes for a nifty period potboiler all on its own.” —Rocky Mountain News

“[Gores] is a master storyteller and fun to follow down the fog-bound streets of San Francisco. . . . [Spade & Archer] engages and flows with creepy atmosphere, crisp dialogue and multiple plots, one drawn from Hammett’s Pinkerton days, spinning like plates on poles.” —Dallas Morning News

“No one understands Dashiell Hammett better than Joe Gores, and no one but Joe Gores could have produced such a masterful and faithful rendering of the prequel to The Maltese Falcon. Spade & Archer stands on its own as a taut, engrossing existential crime saga set in San Francisco’s vibrant 1920’s, and as an evocation of Hammett’s style and plots is a triumph. Gores’s wondrous talent shines and the shadow it casts of Hammett is smiling.” —James Grady

“It took guts for Joe Gores to attempt a prequel to one of the great American novels. Guts or nuts, had to be one or the other. Lesser writers have attempted to ape Hammett’s style and come off like mannered tough guys wearing their big brothers’ double-breasted suits, but Gores manages to be both true to Hammett's vision and true to his own considerable gifts. Spade & Archer is a triumph–intricately plotted, deft and strongly written, and perhaps most exciting, he shows us Sam Spade at the beginning of his career, deepening our appreciation of the character. I loved it.” —Robert Ferrigno

“I was amazed at Joe Gore’s Spade & Archer. He’s got Hammett’s style down, and the story he tells is every bit as engrossing as anything Hammett ever wrote. I adored it.” —Joe R. Lansdale
Read More