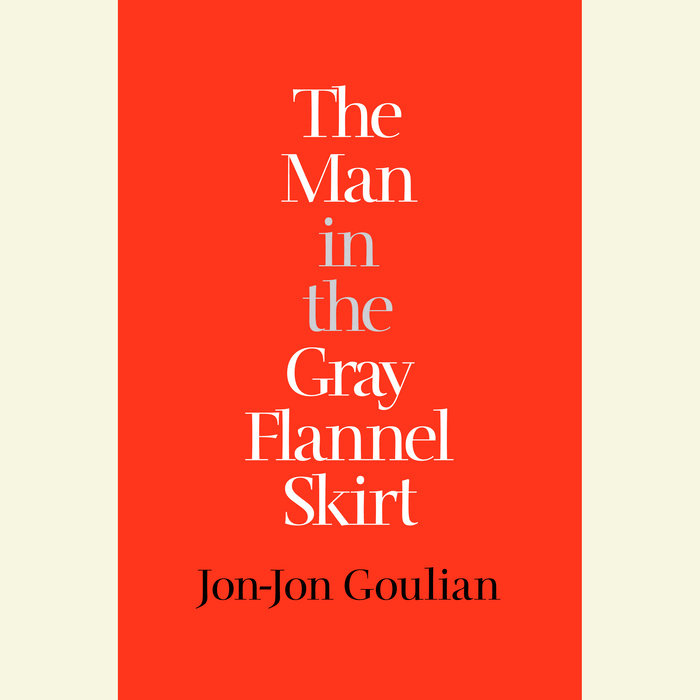 The vibrant, funny, and heartwarming story of an outcast who becomes an odd man in

If you have ever felt like a misfit in school or been paralyzed by your family’s imposing expectations, if you have ever obsessed about your appearance or panicked about choosing a career path, if you have ever wondered if every single thing to which your body is exposed, from egg yolks to X-rays, might harm you, then you may be surprised to find a kindred spirit in The Man in the Gray Flannel Skirt.

Growing up in sunny La Jolla, California, Jon-Jon Goulian was a hyperneurotic kid who felt out of place wherever he turned, and who, in his own words, was forever on the verge of “caving in beneath the pressures of modern life.” From his fear of competition to his fear of pimples, from his fear of sex to his fear of saturated fat, the range and depth of Jon-Jon’s phobias were seemingly boundless. With his two older brothers providing a sterling example he believed he could never live up to, and his stern grandfather, the political philosopher Sidney Hook, continually calling him to account for his intellectual failure, Jon-Jon, feeling pressed against the wall, wracked with despair, and dizzy with insecurity, instinctively resorted, for reasons that became clear to him only many years later, to a most ingenious scheme for keeping conventional expectations at bay: women’s clothing! Ingenious, perhaps, but woefully ineffective, as Jon-Jon discovers, again and again, that behind his skirt, leggings, halter top, and high heels, he’s still as wildly neurotic, and as wracked with anxiety, as he’s always been.

In this hilarious and heartfelt memoir, Jon-Jon Goulian’s witty and exuberant voice shines through, as he comes to terms with what it means to truly be yourself.
Read More

“Is there anybody more likable than Jon-Jon Goulian? Toned, tanned, bedaubed with fantastic eye makeup—the first and only cross-dresser ever to have worked at The New York Review of Books—Mr. Goulian has made friendliness his life's work, tricking successive generations of newcomers into thinking that the New York literary world is populated with attractive and unusual people....A Gen-X update on an archetype we associate most readily with Woody Allen, [he] offers himself as 'a neurasthenic man' in a 'city of horrors,' terrified of moths, sex, saturated fat, the draft, Central Park, taxi cabs and high-school reunions. If Woody Allen were a cross-dresser from La Jolla, is this who he’d be?”
--New York Observer

“For anyone who’s ever felt like no one in a world that demands we all be someone, here it is: the psychedelically neurotic account, painfully brave and punishingly funny, of one human being’s long struggle to make his outsides match his unclassifiable insides.”
—Walter Kirn, author of Lost in the Meritocracy

“Never have I read a fish-out-of-water story that had me so instantly and irrevocably enamored with the fish.”
—Sloane Crosley, author of How Did You Get This Number

“[Goulian’s] life is one many would consider a success....yet this book isn’t just about his triumphs. It’s also about his struggles to come of age in a world in which he doesn’t fit....It is his voice, with its wryly humorous, slightly self-deprecating tone, that engages the reader.”
--Booklist

“A sassy, outspoken narrative [that] gets kudos for its droll frankness.”
--Kirkus

“This is a book that will fill you with laughter, pity, identification, and admiration; it might also show you how to be a man. If Jon-Jon Goulian did not exist, it would have been necessary to invent him.”
—Benjamin Kunkel, author of Indecision

"Jon-Jon Goulian manages to pull off the hardest thing to do when writing about yourself, which is being totally candid yet also compassionate.  It’s hard to imagine anyone not loving this book, but everyone who’s ever felt like a freak will find it especially cheering, affirming, heartrending, and hilarious.”
—Emily Gould, author of And the Heart Says Whatever

“I read this book in a single, thrilling sitting. It’s beautifully written, extremely moving, and, most important, funny as hell!”
—Simon Rich, author of Elliot Allagash

“You can't read this book without falling a little bit in love with Jon-Jon Goulian.  Suddenly, at the age of 40, after not having published a word his whole life, he gives us one of the funniest, saddest, and most exquisitely crafted books about a dysfunctional neurotic ever written.”
—Katie Roiphe, author of Uncommon Arrangements

“Jon-Jon Goulian is beautifully, unabashedly himself as The Man in the Gray Flannel Skirt.”
—Vanity Fair

“A hilariously neurotic trip down the rabbit hole that is both a baffling series of oddities and an endearing, relatable sashay to self-acceptance – sometimes on the same page. Walking a mile in the first-time author’s leather pumps will make anyone feel normal – not because he’s so bizarre, but because, underneath all the protective armor – the eyeliner, the chandelier earrings, the ever-climbing neck tattoos – he’s just like us.”
—Modern Tonic

“Some people have to dare to be original, but Jon-Jon Goulian would have to try hard to be normal. As the lawyer he is might say: he is sui generis. Read this book, and live a little.”
—Elizabeth Wurtzel, author of Prozac Nation