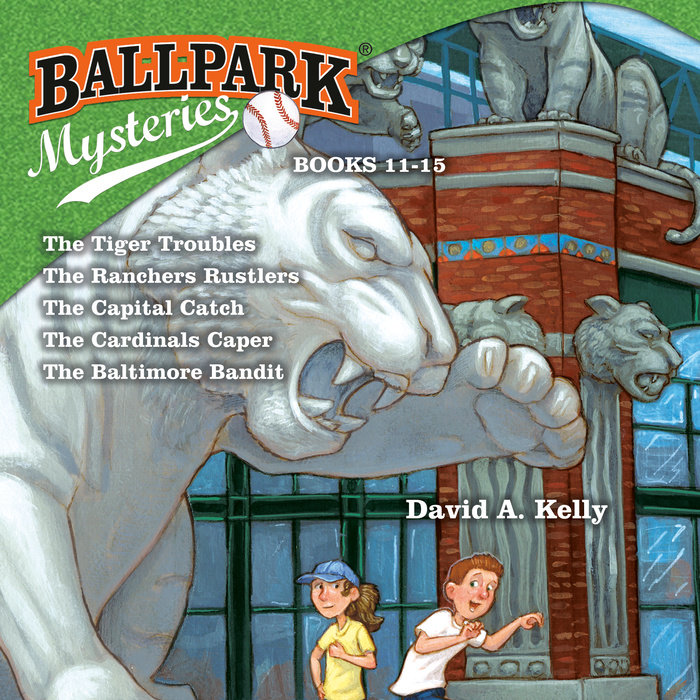 Written by: David A. Kelly
Read by: Marc Cashman
5 Hours and 58 Minutes Imprint: Listening Library Ages 6-9 years Release Date: February 01, 2022
Ballpark Mysteries #11: The Tiger Troubles
Someone is blackmailing the Detroit Tigers’ famous slugger, Tony! They’ve stolen his favorite trophy, and unless he fills a tiger-shaped bag with signed baseballs, he’ll never see the trophy again. Luckily, all-star sleuths Mike and Kate are ready to pounce on the case. Can they track down the thief in time to save Tony’s treasure?

Ballpark Mysteries #12: The Rangers Rustlers
Let’s play ball, y’all! Mike and Kate are very excited to watch a Texas Rangers game. Mike even bought an official shirt. But little did he know—it’s a fake! A sneaky crook is tricking Rangers fans into buying the wrong shirts. Can the cousins help a real-life police ranger round up the culprit?

Ballpark Mysteries #13: The Capital Catch
Mike and Kate are about to face their biggest, most important mystery yet! Why? It involves the president of the United States! The president’s brother is a catcher on the Nationals baseball team, and someone is stealing his equipment! Can these super-sleuths help the commander in chief catch a criminal?

Ballpark Mysteries #14: The Cardinals Caper
It's a special day in St. Louis, and there's a pregame celebration with Clydesdale horses that drive around the edge of the stadium before the game. Mike and Kate get to meet the horses and the Dalmatian that rides along. Then, during the game, they find out the Dalmatian is missing. They rush to investigate and find a ransom note. The criminal will return the dog if they can get one of St. Louis's World Series trophies! Can Mike and Kate catch the crook and rescue the pup?

Ballpark Mysteries #15: The Baltimore Bandit
Mike and Kate's next mystery is legendary! The great pitching legend Babe Ruth's first team was in Baltimore, so the Orioles' ballpark has one of his gloves on display. While Mike and Kate are eating pancakes with the Orioles' pitcher, the glove goes missing. The only clue they have is a gold coin . . . which points back to the pancake-eating pitcher! But how could he have done it? It will take more snacks at the ballpark, a talking parrot, and expert detective work to solve this mystery! 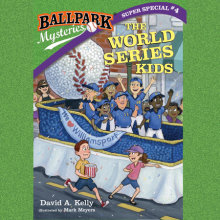 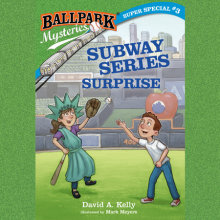 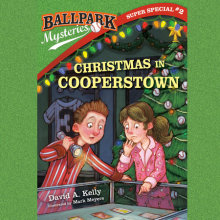 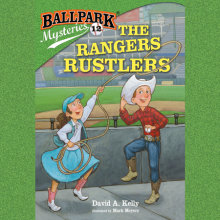