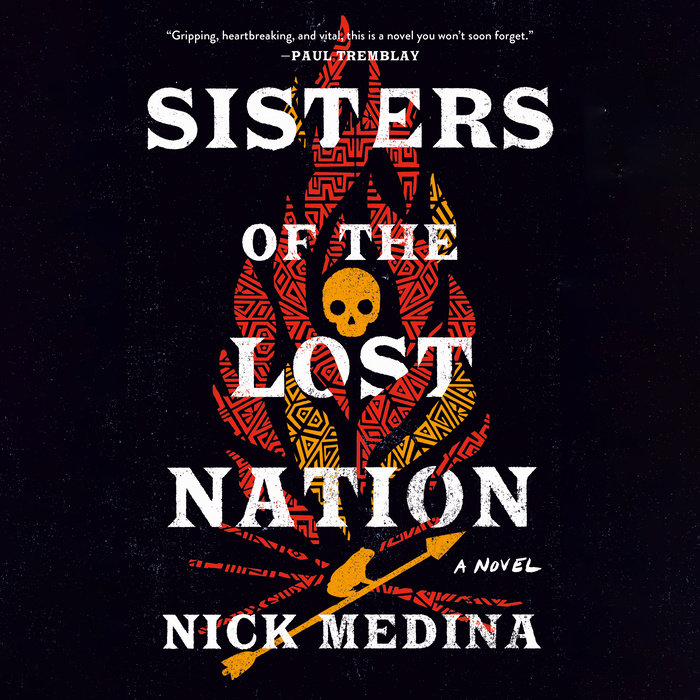 Written by: Nick Medina
Read by: Elva Guerra & Nick Medina
8 Hours and 30 Minutes Imprint: Penguin Audio Genre: Fiction - Thrillers - Supernatural Release Date: April 18, 2023
A young Native girl's hunt for answers about the women mysteriously disappearing from her tribe's reservation leads her to delve into the myths and stories of her people, all while being haunted herself, in this atmospheric and stunningly poignant debut.

Anna Horn is always looking over her shoulder. For the bullies who torment her, for the entitled visitors at the reservation’s casino…and for the nameless, disembodied entity that stalks her every step—an ancient tribal myth come-to-life, one that’s intent on devouring her whole.

With strange and sinister happenings occurring around the casino, Anna starts to suspect that not all the horrors on the reservation are old. As girls begin to go missing and the tribe scrambles to find answers, Anna struggles with her place on the rez, desperately searching for the key she’s sure lies in the legends of her tribe’s past.

When Anna’s own little sister also disappears, she’ll do anything to bring Grace home. But the demons plaguing the reservation—both ancient and new—are strong, and sometimes, it’s the stories that never get told that are the most important.

Part gripping thriller and part mythological horror, author Nick Medina spins an incisive and timely novel of life as an outcast, the cost of forgetting tradition, and the courage it takes to become who you were always meant to be.
Read More
"With the excellent Sisters of the Lost Nation, Nick Medina expertly balances Native mythology, a grounded coming of age story, and a modern, all too real and terrible mystery of Native girls going missing. Gripping, heartbreaking, and vital, this is a novel you won't soon forget, and Anna Horn will no doubt become one of your most cherished fictional characters."
—Paul Tremblay, national bestselling author of A Head Full of Ghosts and The Pallbearers Club

"Sisters of the Lost Nation weaves Native folklore with truths that we feel in our bones to create a story that is as beautiful as it is sad, as powerful as it is frightening, as familiar as it is otherworldly."
—Alma Katsu, author of The Fervor and The Hunger

“Nick Medina’s Sisters of the Lost Nation is a powerful debut novel that drops you in a unique world filled with horrors, both real and mythological. It grips you from the start, engages you to the finish and stays with you after.”
—Iris Yamashita, author of City Under One Roof

"A pulse-pounding horror thriller with a riveting central mystery, Medina's debut is a masterclass in suspense. It's also a moving portrayal of the painful rift between past and present, and an urgent reminder of the profound importance of storytelling, of being heard, seen, and remembered."
—Rachel Harrison, author of Such Sharp Teeth and Cackle

"Sisters of the Lost Nation is a dark and excruciatingly timely debut about the very real horror of Native girls going missing. Medina’s decisive authorial voice and unforgettable characters made for an incredibly powerful read."
—Alexis Henderson, author of The Year of the Witching

"Nick Medina’s debut is a marvelous fusion of the thrilling, the dark, and the uncanny. Nothing in this novel was exactly as I expected it to be; its many denizens behave as real people do, with heartbreaking and sometimes hair-raising unpredictability—and the ending will eat you alive. Simply the best book I’ve read this year.”
—Tanen Jones, author of The Better Liar

“Sisters of the Lost Nation is a gripping and compelling story that’s as poignant as it is timely. Medina’s spectacular blend of tribal mythology, atmospheric settings, and a lead character who settles right into your heart make this book unforgettable.”
—Hannah Mary McKinnon, internationally bestselling author of Never Coming Home

“Medina’s debut blends mystery and Indigenous American mythologies to great effect…Though the Takoda tribe is not a real one, the author has based it on existing Indigenous nations, and the crimes against Indigenous women in the book are sadly realistic. But it’s the importance of stories, and who gets to keep and tell them, that’s at the heart of Medina’s gothic mystery.”
—Library Journal
Read More