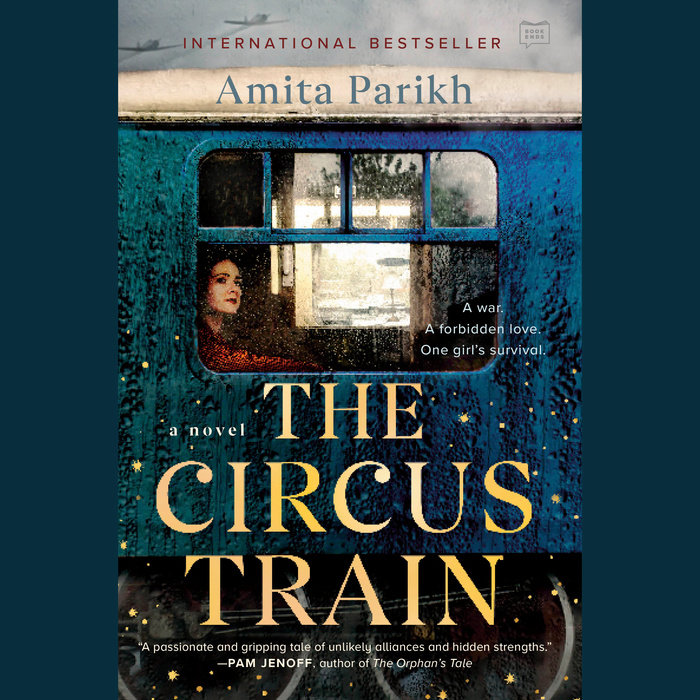 Water for Elephants meets The Night Circus in this World War II debut about a magnificent travelling circus, a star-crossed romance, and one girl’s coming-of-age during the darkest of times.

“A powerful reminder that to live is not just to survive, but to be seen and known for ourselves.” —Pam Jenoff, author of The Orphan’s Tale

When all is lost, how do you find the courage to keep moving forward?

1938. Lena Papadopoulos has never quite found her place within the circus, even as the daughter of the extraordinary headlining illusionist, Theo. Brilliant and curious, Lena—who uses a wheelchair after a childhood bout with polio—yearns for the real-world magic of science and medicine, her mind stronger than the limitations placed on her by society. Then her unconventional life takes an exciting turn when she rescues Alexandre, an orphan with his own secrets and a mysterious past.

As World War II escalates around them, their friendship blossoms into something deeper while Alexandre trains as the illusionist’s apprentice. But when Theo and Alexandre are arrested and made to perform in a town for Jews set up by the Nazis, Lena is separated from everything she knows. Forced to make her own way, Lena must confront her doubts and dare to believe in the impossible—herself.
Read More
People’s Book of the Week January 2023
One of Washington Post’s 10 Noteworthy Books for December 2022
One of BookRiot’s 8 New Historical Fiction Reads Set During and After WWII
One of Library Journal’s Top 20 Fall Debut Novels
One of BookBub’s Best Historical Fiction Coming Out This December
One of The Globe and Mail’s 100 Best Books of 2022

“A sweeping love story set amid a travelling circus and the horrors of WWII. As the Nazis encroach, the performers struggle to survive betrayals and heartbreaking loss, all leading to a spinning-plates grand finale with an irresistible message: Finding your true self (and true love) is the greatest wonder of all.” –People

“A passionate and gripping tale of unlikely alliances and hidden strengths, and a powerful reminder that to live is not just to survive, but to be seen and known for ourselves.” —Pam Jenoff, author of The Woman With the Blue Star

“Magic, love, destiny, and illusion combine with the glitter of 20th century circus life and the heartbreak of war….A powerful tale of hope in the face of tragedy and great love in the face of staggering loss…Extraordinary debut.” —Kristin Harmel, author of The Book of Lost Names and The Forest of Vanishing Stars

“A friendship turns into something more just as the Nazis are zeroing in on the traveling show.” —Washington Post

“[A] multilevel story of friendship, love, and survival spanning the World War II era…It is Parikh’s sensitive eye toward the reality of living with polio in the 1930s to 1950s that is the real heart of this romantic tale.” —Library Journal

“Fascinating…Parikh’s extensive historical research adds authenticity to the lives of the circus performers as well as Lena’s disability, and the characters’ arcs highlight the ever-present dangers in WWII Europe and make palpable the strength of friendship. Fans of historical fiction will be drawn to this page-turner.” —Publishers Weekly

“Parikh creates storytelling magic in her absorbing tale of a young woman discovering her own capabilities.” —Booklist

“The juxtaposition of the magical and mysterious circus with the bleakness of pre-WWII Europe is enrapturing in this unique take on a well-worn time period.” —Buzzfeed

“This engaging debut is one of magic and love, tragedy and loss, resiliency and agency.” —Ms. Magazine

"A dazzling and delightful debut." —Ellen Keith, author of The Dutch Wife

"Sit back and enjoy as this magical story transports you through war-torn Europe, demonstrating how family can be found in the most unconventional ways." —Shilpi Somaya Gowda, author of The Secret Daughter

“Deeply entertaining and enchanting….A page-turner that holds onto its secrets until its satisfying conclusion. This richly drawn and captivating novel is a must-read for fans of historical fiction.”—Constance Sayers, author of The Ladies of the Secret Circus
Read More