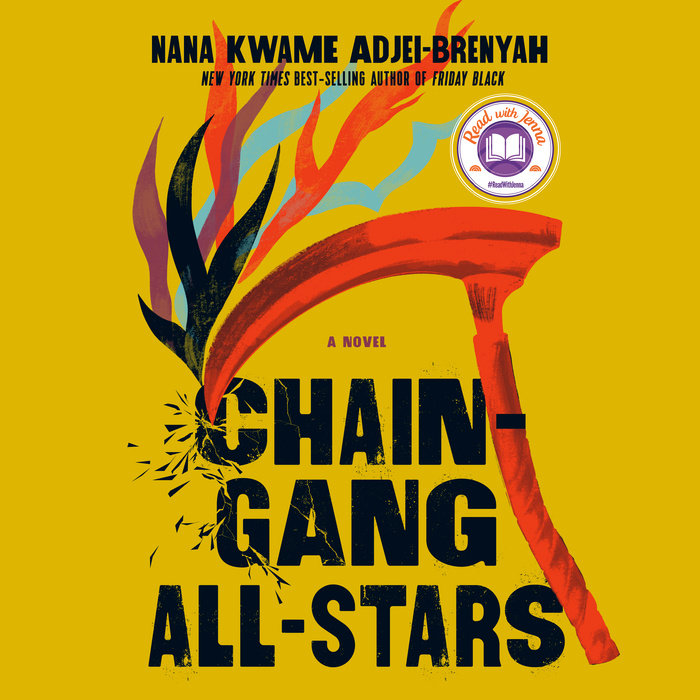 "Wildly entertaining, formally bold, and politically electrifying. Read one page, any page, and you'll see what I mean.” —George Saunders, best-selling author of Liberation Day and Lincoln in the Bardo


Loretta Thurwar and Hamara “Hurricane Staxxx” Stacker are the stars of Chain-Gang All-Stars, the cornerstone of CAPE, or Criminal Action Penal Entertainment, a highly-popular, highly-controversial, profit-raising program in America’s increasingly dominant private prison industry. It’s the return of the gladiators and prisoners are competing for the ultimate prize: their freedom.

In CAPE, prisoners travel as Links in Chain-Gangs, competing in death-matches for packed arenas with righteous protestors at the gates. Thurwar and Staxxx, both teammates and lovers, are the fan favorites. And if all goes well, Thurwar will be free in just a few matches, a fact she carries as heavily as her lethal hammer. As she prepares to leave her fellow Links, she considers how she might help preserve their humanity, in defiance of these so-called games, but CAPE’s corporate owners will stop at nothing to protect their status quo and the obstacles they lay in Thurwar’s path have devastating consequences.

Moving from the Links in the field to the protestors to the CAPE employees and beyond, Chain-Gang All-Stars is a kaleidoscopic, excoriating look at the American prison system’s unholy alliance of systemic racism, unchecked capitalism, and mass incarceration, and a clear-eyed reckoning with what freedom in this country really means from a “new and necessary American voice” (Tommy Orange, The New York Times Book Review).
Read More
A MOST ANTICIPATED TITLE OF THE YEAR: Washington Post, Goodreads, Elle, Oprah Daily, Cosmopolitan, Salon, Seattle Times, Huffington Post, WBUR’s “Here and Now”, The Week, YahooLife, Sunset Magazine, Lit Hub, Book Riot, Tor.com, The Everygirl, The Millions, Lit-Reactor, Our Culture, Republican American, Women’s Wear Daily, Columbia Daily Tribune, The Independent, Publishers Weekly, and Kirkus

*Roxane Gay’s May Selection for the Audacious Book Club*

"One of the most exciting young writers in America. His work is urgent, engaging, wildly entertaining, formally bold, and politically electrifying. Read one page, any page, and you'll see what I mean.”
—George Saunders, author of Liberation Day

“[An] acclaimed master of our futuristic nightmares…a keen observer of racial and socioeconomic disparities that result in a high number of Black people incarcerated. While this is set in the future, it feels uncomfortably close to the present.”
—Oprah Daily

"A brutal, heart-wrenching story that feels so close to reality...A tale of survival and resistance in an unfair prison system...about a group of prisoners who decide to fight to the death for the one thing they want most: freedom."
—Cosmopolitan

“Given how incredible his debut collection was and is, it is no surprise to me that Adjei-Brenyah’s debut novel is this extraordinary! Told with bold, muscular prose, this book is filled with surprising tenderness. Some of the best and most beautiful descriptions of action and violence I have ever read, which is not to say the book celebrates violence so much as it uses violence to explore American incarceration by imagining it as spectacle. As big as it is dazzling. Just wild how good and original this book is. A revelation!”
—Tommy Orange, author of There, There

"As vital as it is brutal. Nana Kwame Adjei-Brenyah illuminates darkness with the electricity of his prose. The massive weight of the subject is matched by the sheer scope of Adjei-Brenyah's imagination. A startling, important novel that will inspire and inform many conversations."
—Charles Yu, author of Interior Chinatown

“A defiant, awe-inspiring novel that will be read, studied, and celebrated for generations, Chain-Gang All-Stars leads with love. Adjei-Brenyah writes with stunning compassion and moral clarity as he interrogates every facet of our carceral world and the American spectacle of violence, never losing sight of the human cost of systemic injustice. Readers will be forever changed by this book.”
—Jessamine Chan, author of The School for Good Mothers

“Chain-Gang All-Stars makes explicit how the spirit erodes as the body becomes currency. Adjei-Brenyah writes sharply about the economy of spectacle and the fickle alchemy between futility and hope.”
—Raven Leilani, author of Luster

“In a narrative world where the real is growingly more unbelievable than the make believe, Chain-Gang All-Stars is an uncanny, singular feat of literature. I’ve never read satire so bruising, so brolic, so tender and really, so pitch-perfect. It’s nuts brilliant. Just read it!”
—Kiese Laymon, author of Heavy: An American Memoir

"Adjei-Brenyah may have the buzziest book of the year...A ferocious attack on America's for-profit prison systems."
—Goodreads' Most Anticipated Books of 2023

“A clear-eyed critique of our country's prison system, along with the profit and racism inherent in them.”
—Salon

"Adjei-Brenyah’s debut novel is equal parts Squid Game and Riot Baby, but also brought to mind Ralph Ellison’s Invisible Man…Adjei-Brenyah writes characters that are both larger than life and intimately human…It is funny, it is brutal, and it is an extremely necessary text.”
—Tor.com

“With his sharp eye for satire and reverence for humanity, Adjei-Brenyah’s latest explores the exploitation, violence, and false promises of the prison industrial complex, capitalism, and the country itself.”
—The Millions

"A brutal, futuristic view of a gladiatorial privatization of our current prison system. [Adjei-Brenyah] does an incredible job of creating stories that take you beyond the edge of your tolerance, urging you to see the parallel social commentary beneath. I always have to take a moment to catch my breath when I set his work down and this full-length work is leaving me gulping for air and truth."
—Carrie Koepke from Skylark Books, Columbia Daily Tribune

“Chain-Gang All-Stars should pique your interest if titles like Octavia Butler's Parable of the Sower and Atwood's Handmaid's Tale are more your vibe.”
—The Week

“At once a kaleidoscopic, imaginative examination of America’s unjust prison system, and a fantasy-tinged spectacle, Chain-Gang All-Stars is likely to excite and provoke in equal measure.”
—Our Culture

“A searing debut with an unforgettable voice, Chain-Gang All-Stars will force you to reevaluate what freedom in America really means.”
—Lit-Reactor

“An acerbic, poignant, and, at times, alarmingly pertinent dystopian novel…In his debut short story collection, Friday Black, Adjei-Brenyah displayed a prodigious flair for deadpan satiric narratives set in alternate realities that often seem uncomfortably close to our own, especially regarding race and class divisions. With his first novel, he proves he can sustain his outrage, imagination, wit, and compassion for a deeper dive into the darker reaches of the American soul…Adjei-Brenyah displays his impressive range of tone and voice…It is an up-to-the-minute j’accuse that speaks to the eternal question of what it truly means to be free. And human. Imagine The Hunger Games refashioned into a rowdy, profane, and indignant blues shout at full blast.”
—Kirkus, starred review