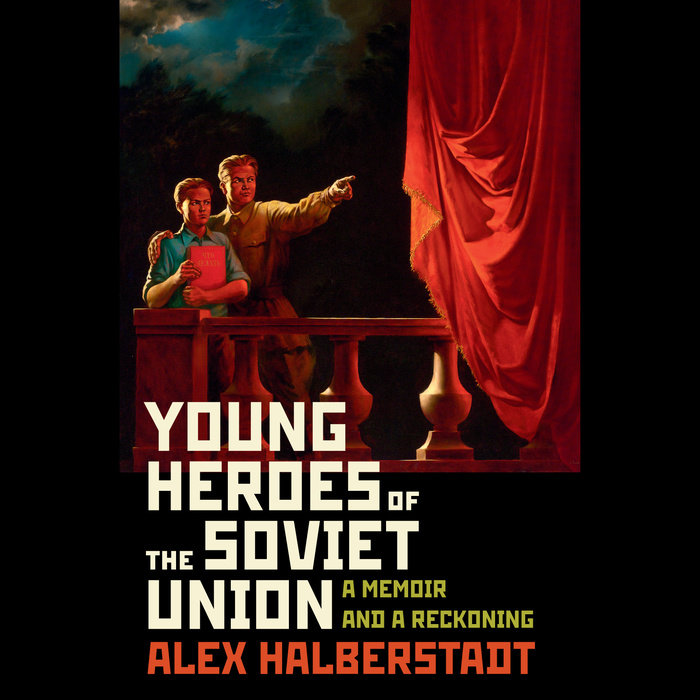 Can trauma be inherited? It is this question that sets Alex Halberstadt off on a quest to name and acknowledge a legacy of family trauma, and to end a century-old cycle of estrangement.

His search takes him across the troubled, enigmatic land of his birth. In Ukraine he tracks down his paternal grandfather—most likely the last living bodyguard of Joseph Stalin—to reckon with the ways in which decades of Soviet totalitarianism shaped three generations of his family. He visits Lithuania, his Jewish mother’s home, to examine the legacy of the Holocaust and pernicious anti-Semitism that remains largely unaccounted for. And he returns to his birthplace, Moscow, where his glamorous grandmother designed homespun couture for Soviet ministers’ wives, his mother consoled dissidents at a psychiatric hospital, and his father made a dangerous living dealing in black-market American records. Along the way, Halberstadt traces the fragile and indistinct boundary between history and biography.

Finally, he explores his own story: that of an immigrant who arrived in America, to a housing project in Queens, New York. A now fatherless ten-year-old boy struggling with identity, rootlessness, and a yearning for home, he became another in a line of sons who grew up separated from their fathers by the tides of politics and history.

As Halberstadt revisits the sites of his family’s formative traumas, he uncovers a multigenerational transmission of fear, suspicion, melancholy, and rage. And he comes to realize something more: Nations, like people, possess formative traumas that penetrate into the most private recesses of their citizens’ lives.


Cover art: Komar and Melamid, What Is to Be Done? (from the Nostalgic Socialist Realism series), 1983 (photograph courtesy of Sotheby’s)
Read More
“A loving and mournful account that’s also skeptical, surprising and often very funny . . . There’s plenty of writing like this in the book—confident, precisely drawn imagery that will make you remember what Halberstadt describes in his own unforgettable terms . . . It’s the unexpected specificity of Halberstadt’s observations that ultimately make this memoir as lush and moving as it is.”—The New York Times

“The book is more than just an account of one family’s ordeals: it is an engrossing account of dictatorship, war and genocide, and how the toxic legacy they left behind has etched itself into successive generations of Soviet citizens. Consumed by Halberstadt’s own longing for meaning, it meditates on the power of storytelling to bind our unstable and episodic memories into a coherent narrative—and on the gaps and enigmas that make this impossible.”—The Guardian

“A deeply personal book, an engaging and subtle piece of nonfiction that’s full of history and [Halberstadt’s] own wit.”—The Paris Review

“I remember being in a bar with Alex Halberstadt almost twenty years ago, talking about our families, when he said, ‘Did I ever tell you my grandfather was Stalin’s bodyguard?’ He hadn’t. I suggested that he write a book about it. Not in my most hopeful imaginings could that book have turned out to be as surprising, sad, funny, and engrossing as the one he wrote. This is history as memoir, and vice versa.”—John Jeremiah Sullivan, author of Pulphead

“Alex Halberstadt is a magnificent writer. Young Heroes of the Soviet Union is a beautiful book about trauma and its impact on one extraordinary family, and an incisive, radiant look at the long legacy of suffering and war.”—Olivia Laing, author of The Lonely City

“Alex Halberstadt writes honestly and movingly about what is inescapable in a family, the toll pain inflicts on the ones we love, and how that pain echoes across generations.”—David Bezmozgis, author of The Betrayers

“Reading Young Heroes of the Soviet Union is an immersion in waters of profound depth and bracing lambency. The light glows in the quiet acuity of the prose. And it shines on vast and dire patterns that transcend the merely personal—the unfathomable hardships that nations and families inflict on people, and how we endure. This truly excellent book will transform your understanding of what memoir can do.”—Wells Tower, author of Everything Ravaged, Everything Burned
Read More