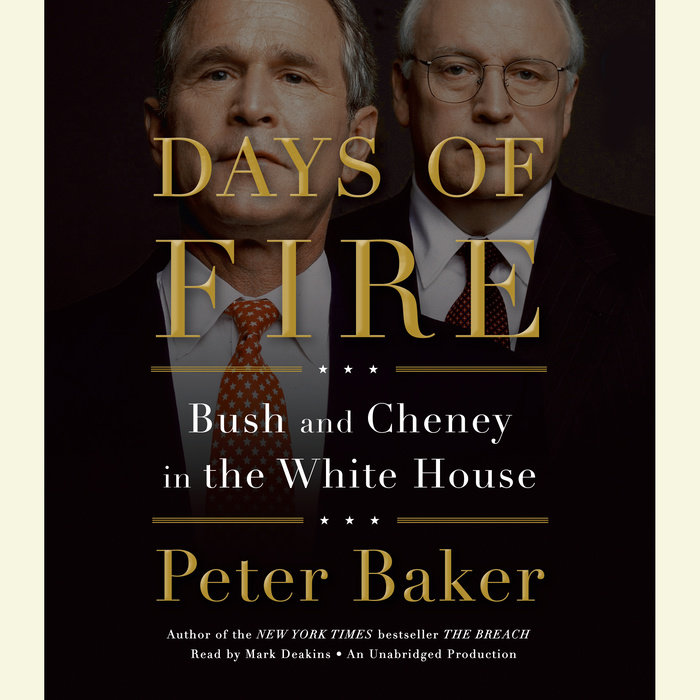 In Days of Fire, Peter Baker, Chief White House Correspondent for The New York Times, takes us on a gripping and intimate journey through the eight years of the Bush and Cheney administration in a tour-de-force narrative of a dramatic and controversial presidency.

Theirs was the most captivating American political partnership since Richard Nixon and Henry Kissinger: a bold and untested president and his seasoned, relentless vice president. Confronted by one crisis after another, they struggled to protect the country, remake the world, and define their own relationship along the way. In Days of Fire, Peter Baker chronicles the history of the most consequential presidency in modern times through the prism of its two most compelling characters, capturing the elusive and shifting alliance of George Walker Bush and Richard Bruce Cheney as no historian has done before. He brings to life with in-the-room immediacy all the drama of an era marked by devastating terror attacks, the Iraq War, Hurricane Katrina, and financial collapse.
The real story of Bush and Cheney is a far more fascinating tale than the familiar suspicion that Cheney was the power behind the throne. Drawing on hundreds of interviews with key players, and thousands of pages of never-released notes, memos, and other internal documents, Baker paints a riveting portrait of a partnership that evolved dramatically over time, from the early days when Bush leaned on Cheney, making him the most influential vice president in history, to their final hours, when the two had grown so far apart they were clashing in the West Wing. Together and separately, they were tested as no other president and vice president have been, first on a bright September morning, an unforgettable “day of fire” just months into the presidency, and on countless days of fire over the course of eight tumultuous years.
Days of Fire is a monumental and definitive work that will rank with the best of presidential histories. As absorbing as a thriller, it is eye-opening and essential reading.

“Filled with enlivening detail and judicious analysis, Days of Fire is the most reliable, comprehensive history of the Bush years yet.”—Jim Kelly, The New York Times

“Mr. Baker, a White House reporter for the New York Times, has pulled off something of a journalistic miracle: He has written a thorough, engaging and fair history on the Bush-Cheney White House, the most polarizing presidency since Johnson's (Andrew, not Lyndon), with the possible exception of the current one.”—Jonathan Karl, The Wall Street Journal

"The story of those eight years would seem far too vast to contain inside a single volume. Yet here that volume is. Peter Baker neither accuses nor excuses. He writes with a measure and balance that seem transported backward in time from some more dispassionate future."—David Frum, New York Times Book Review

“A fine new book about [Bush’s] time in office … The Bush-Cheney era weighs heavily on America. Its divisions and disappointments help to explain much about today’s politics, from public war-weariness to the anti-establishment contempt that seethes among the Republican grassroots and the Tea Party. Insiders have already penned enough don’t-blame-me memoirs and score-settling biographies to dam the Potomac. Mr. Baker concentrates on relations between the two men at the top of the executive branch. His shrewd, meticulous reporting offers a useful corrective to tales of a puppet-master deputy manipulating an inexperienced boss.”—The Economist

“In producing the first comprehensive narrative history of what will surely remain one of the most controversial presidential administrations in U.S. history, Baker has done yeoman’s service. All subsequent writers dealing with the subject will find his book indispensible … Baker’s conclusion, which will almost certainly stand the test of time, is that Bush is his own man and was responsible for the decisions made in his name.”—Walter Russell Mead, Foreign Affairs

“Baker offers clear-eyed perspective on the fateful decisions of a decade ago … [A] kaleidoscopic, behind-the-scenes narrative.”—Michael O’Donnell, The Christian Science Monitor

“Magisterial … Baker has done a tremendous job of knitting together the disparate strains of a complex and multilayered narrative. For all its density, the book proceeds at a beach-read velocity that makes it a pleasure to peruse. Especially enjoyable is Baker’s commendable urge to puncture many of the easy myths that still surround the Bush years. Anyone who reads it will come away from this account with their understanding of the period greatly increased—which, after all, is just what a history like this is supposed to accomplish … [A] remarkable achievement.”—Christian Caryl, The National Interest

“A magisterial study of the way [Bush and Cheney] influenced each other, waxing and then waning, during the fateful eight-year presidency of George W. Bush.”—Jamie Stiehm, US News

“[Days of Fire] is steeped in facts, and the writing is clear and crisp. You will also be impressed by Baker’s research and reporting … All told, Days of Fire delves deeply into the Bush-Cheney partnership and offers breathtaking insights into power, passion and politics at the highest levels of our government.”—BookPage

"The complex partnership of George W. Bush and Dick Cheney undergirds this authoritative narrative of their tumultuous eight years in Washington. Baker, the senior White House correspondent for New York Times, skillfully navigates how Bush, a national security neophyte, came to rely heavily on the former Wyoming congressman and secretary of defense, a consummate Washington insider. Although Cheney became one of the most influential vice presidents in American history and grew to relish his Darth Vader reputation, Baker upends the popular perception that Bush did his bidding … Baker delivers a fast-paced read that deftly weaves the trials and tribulations of the Bush presidency into a monumental tale of hubris and missed opportunities for greatness."—Publishers Weekly, starred review

"A thorough, objective and surprisingly positive examination of the Bush-Cheney years. Written as though it has the perspective of a century's distance on the events of the last decade, New York Times senior White House correspondent Baker dispatches false and puerile memes—Bush stole Florida, blood for oil, Bush lied and kids died, etc.—to the dustbin of history as he delivers "the most documented history of the Bush-Cheney White House to date." The author is no Bush cheerleader; he shines a pitiless light on the failures of judgment, erroneous intelligence and excessive reliance on subordinates that led to the debacle in Iraq, which undid Bush's second term. Baker concludes that Bush "was at his best when he was cleaning up his worst." The author shows how it all went wrong, however, without a hint of partisan rancor. This briskly written but exhaustively detailed account defies expectations by portraying an administration of intelligent, patriotic adults with necessarily limited information striving to do what they believed was best for the nation in a dangerous era, with real but overlooked achievements. The president, in particular, appears as a man of decency who retained his optimism and dedication to principle as his polls declined to record lows and political allies fled. In delineating the businesslike relationship between Bush and Cheney, Baker refutes the popular notion that Cheney was the dominant figure, though Bush relied heavily on his experience during his first term … A major contribution to the rehabilitation of our 43rd president."—Kirkus Reviews, starred review

"An ambitious, engrossing, and often disturbing study of the inner workings, conflicts, and critical policy decisions made during the eight years of Bush and Cheney governance … This is a superbly researched, masterful account of eight critical, history-changing years."—Booklist, starred review

"Peter Baker's superb biography of George W. Bush and Dick Cheney will stand as the most complete and balanced discussion of the men and their administration for decades. Until the Bush library opens the wealth of papers that will expand our knowledge of their White House, we will be indebted to Baker for his brilliant reconstruction of this presidency. No one has drawn the complicated Bush-Cheney relationship more convincingly than Baker. Anyone eager to understand our current dilemmas does well to read this book."—Robert Dallek, author of Nixon and Kissinger: Partners in Power

"Peter Baker tells the story of Bush and Cheney with the precision of a crack reporter and the eye and ear of a novelist. This is perhaps the most consequential pairing of a president and vice president in our history. And Baker captures it all—the triumphs and defeats, the partnership and eventual estrangement. It is a splendid mix of sweeping history and telling anecdotes that will keep you turning the page."—Chris Wallace, anchor of Fox News Sunday

"It turns out George W. Bush was no puppet, and Dick Cheney no puppet master. Days of Fire takes us inside a relationship that came to define American conflict, peace, and politics. Forget everything else you've read. This excellent book tells us what really happened, from the mouths of the players themselves, and explains why, more than a decade after 9/11, we are still a nation at war."—Gwen Ifill, coanchor of PBS Newshour

"9/11, two long wars, a crushing recession, neo-cons, and turf wars defined the first decade of twenty-first-century American politics. In the middle of it all, the president and his powerful vice-president. The complicated and then contentious relationship between Bush and Cheney is worthy of Shakespeare. Peter Baker’s Days of Fire is a book for every presidential hopeful and every citizen."—Tom Brokaw, author of The Greatest Generation

"Without ever surrendering his critical detachment—this book is no valentine—Baker humanizes the leader whose post-Reagan agenda was hijacked by foreign terrorists and Wall Street crooks. You may or may not agree with George W. Bush's actions as president, but by the time you put Days of Fire down, you will understand them, and him, as never before."—Richard Norton Smith, author of Thomas E. Dewey and His Times
Read More