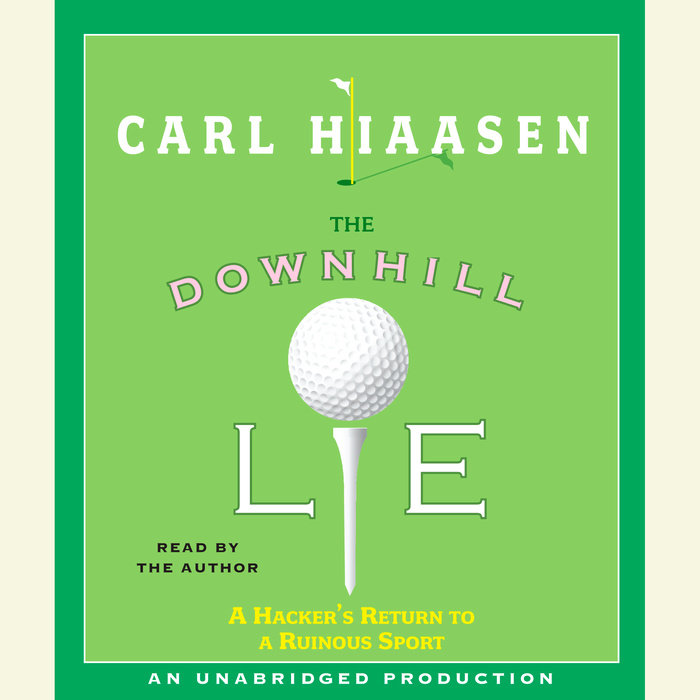 Originally drawn to the game by his father, Carl Hiaasen wisely quit golfing in 1973. But some ambitions refuse to die, and as the years–and memories of shanked 7-irons faded, it dawned on Carl that there might be one thing in life he could do better in middle age than he could as a youth. So gradually he ventured back to the dreaded driving range, this time as the father of a five-year-old son–and also as a grandfather.

“What possesses a man to return in midlife to a game at which he’d never excelled in his prime, and which in fact had dealt him mostly failure, angst and exasperation? Here’s why I did it: I’m one sick bastard.” And thus we have Carl’s foray into a world of baffling titanium technology, high-priced golf gurus, bizarre infomercial gimmicks and the mind-bending phenomenon of Tiger Woods; a maddening universe of hooks and slices where Carl ultimately–and foolishly–agrees to compete in a country-club tournament against players who can actually hit the ball. “That’s the secret of the sport’s infernal seduction,” he writes. “It surrenders just enough good shots to let you talk yourself out of quitting.”

Hiaasen’s chronicle of his shaky return to this bedeviling pastime and the ensuing demolition of his self-esteem–culminating with the savage 45-hole tournament–will have you rolling with laughter. Yet the bittersweet memories of playing with his own father and the glow he feels when watching his own young son belt the ball down the fairway will also touch your heart. Forget Tiger, Phil and Ernie. If you want to understand the true lure of golf, turn to Carl Hiaasen, who offers an extraordinary audiobook for the ordinary hacker.
Read More
“This book is a return by Hiaasen to his best with the sport of golf providing the venue for his unique wit and biting humor. . . . Throughout, he spares no punches on himself. You feel his pain and frustration as he takes three steps forward and two back (usually in the rough). You’ll have many laugh-out-loud moments, either at his expense or the expense of those infected by his bad mojo. His fate is always believable and you never tire of his desire to improve (even if aided by questionable pharmaceuticals). You can even learn from his experiences. I don’t know if this book can help your stroke, but after reading about his golf cart fiasco, I’ve been much more diligent to set the emergency brake on my car. If you’ve never read Carl Hiaasen, this is a great place to start in that it requires no prerequisites, not even a working knowledge of golf. If you have read him before, this is a wonderful return to the magic (albeit voodoo) that is Carl Hiaasen.”
–Scott Mayo, Decatur Daily


“…[Hiaasen’s] insights into the insane lengths a golfer will go to in hopes of a lower score are always entertaining. If you’ve been bitten by the golf bug, you’ll appreciate every moment of Hiaasen’s magnificent obsession. If you haven’t, read The Downhill Lie and laugh at those of us who have.”
–Howard Shirley, Bookpage


“[Hiaasen] displays a fine-tuned sense of the absurd. . . . it brims with golf mania.
–Janet Maslin, The New York Times


“Any golfer on the downward side of middle age will be able to picture himself in the author’s soft-spiked shoes. And the foibles and embarrassments, as well as the joys, of casual and tournament golf ring true.”
–Mark Graham, Rocky Mountain News


“Memoir is new territory for him, but Hiaasen is Hiaasen. Fans of his bizarro novels will find his irony and sense of humor remain unaffected on the links.”
–The Florida Times-Union


“Golfers in general tend to be self-critical, but Mr. Hiaasen is a self-lacerator. He doesn’t curse or throw his clubs, but he sighs a lot and asks existential questions like, “Why do we do this?” and “Why are we out here?” He plays the way you imagine Samuel Beckett might have played. He can’t go on, but he goes on.”
–Charles McGrath, New York Times


“His analysis of his lessons, hapless rounds and gimmicky golf equipment is hilarious, and his vivid descriptions are vintage Hiaasen . . . With the satirically skilled Hiaasen, who rarely breaks 90 on the links, this narrative is an enjoyable ride.”
–Publishers Weekly


“It has taken Carl Hiaasen to capture the essence of a game that, like the bagpipes and the kilt, was invented by the Irish and given to the Scots as a joke. Carl's dementia is kind of exquisite. He lampoons the most banal aspects of stodgy blue-blooded American country-club life. The simple act of buying a set of clubs gets the full Hiaasen treatment, and the guilt-ridden angst of the triangular love-hate relationship between himself, his drop-dead beautiful Greek wife, and the drop-dead-you-rotten-bastard Scotty Cameron putter she bought him, is alone worth the price of one for yourself and another for Father's Day.”
–David Feherty
Read More 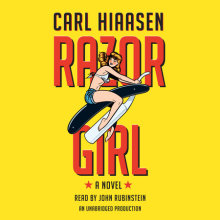