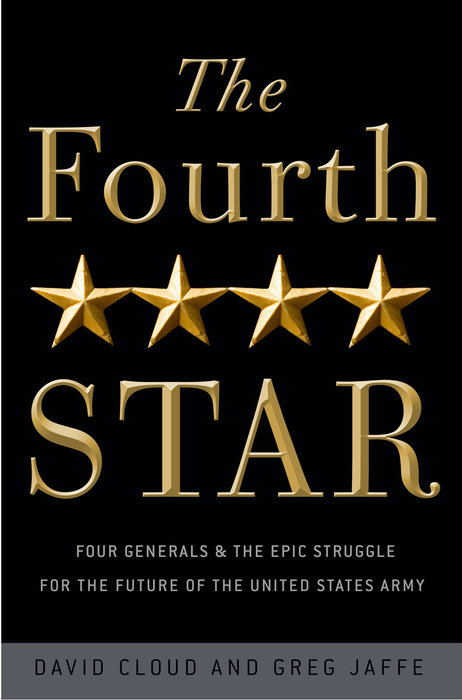 Written by: Greg Jaffe & David Cloud
Read by: Richard McGonagle
6 Hours and 12 Minutes Imprint: Random House Audio Genre: History - Military - United States Release Date: October 13, 2009
They were four exceptional soldiers, a new generation asked to save an army that had been hollowed out after Vietnam. They became the Army's most influential generals in the crucible of Iraq. Collectively, their lives tell the story of the Army over the last four decades and illuminate the path it must travel to protect the nation over the next century. The careers of this elite quartet show how the most powerful military force in the world entered a major war unprepared, and how the Army, drawing on a reservoir of talent that few thought it possessed, saved itself from crushing defeat against a ruthless, low-tech foe. In The Fourth Star, you'll follow:

H Gen. John Abizaid, one of the Army's most brilliant minds.
H Gen. George Casey Jr., the son of the highest-ranking general to be killed in the Vietnam War.
H Gen. Peter Chiarelli, an emotional, take-charge leader who felt the sting of the Army's failures in Iraq.
H Gen. David Petraeus, a driven soldier-scholar. When he finally got his chance in Iraq, he changed the Army's conception of what was possible.

The Fourth Star ranges far beyond today's battlefields, evoking the Army's tumultuous history since Vietnam through these four captivating lives.
Read More
"Cloud and Jaffe are gifted writers, who use their access to these senior commanders to good effect. They provide a lively, personalized account of the successes and setbacks of the four highly able and ambitious servicemen as they climb the military career ladder.

Cloud and Jaffe have produced a worthwhile and fascinating account packed with many insights about officership, promotion and command in the army and civil-military relations."--The Washington Post Book World


"A sparkling account of today's U.S. Army–a work of art that offers novelistic details but also carries the impact of well-reported fact. I learned something on nearly every page, and much of it astonished me. This is the best book I've read on the military in a long time."
—Thomas E. Ricks, New York Times bestselling author of Fiasco and The Gamble

"Important and illuminating . . . sheds light on the epic struggle now being waged within the U.S. military over whether to heed the hard lessons of the past eight years or bury them in the same forgetfulness that marked our post-Vietnam years."
—Linda Robinson, New York Times bestselling author of Tell Me How This Ends and Masters of Chaos

"Compelling . . . Cloud and Jaffe provide us with an insider' s view of the war, drawn from remarkable access to the men who designed the battlefield strategy. . . . The Fourth Star is an eye-opening portrait of today's Army and the four men who have done more than any of their generation to shape it."
—Rajiv Chandrasekaran, author of the National Book Award finalist Imperial Life in the Emerald City

"If you care about winning tomorrow's wars, then read this book. . . . Jaffe and Cloud draw intimate portraits of four members of the Army's high priesthood, and the implication is clear: The future of the Army is up for grabs."
—Nathaniel Fick, author of the New York Times bestseller One Bullet Away

"A fascinating, intimate look at the men who are leading our wars and trying to change America's largest institution, the U.S. Army. A must-read for students of history, leadership, and engrossing prose."
—Dana Priest, Pulitzer Prize—winning author of The Mission

"This book will provoke envy, if not plain awe. The fact is, the Army gets it: The best do rise to the top, and the chosen few are not all the same. Too bad Wall Street didn't follow the four in this book."
—Bing West, author of No True Glory and The Strongest Tribe
Read More