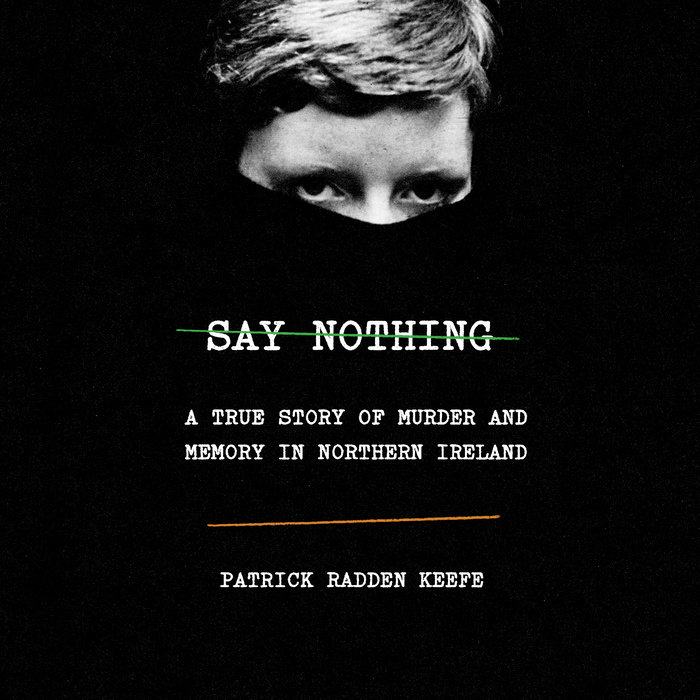 "Masked intruders dragged Jean McConville, a 38-year-old widow and mother of 10, from her Belfast home in 1972. In this meticulously reported book—as finely paced as a novel—Keefe uses McConville's murder as a prism to tell the history of the Troubles in Northern Ireland. Interviewing people on both sides of the conflict, he transforms the tragic damage and waste of the era into a searing, utterly gripping saga." —New York Times Book Review

Jean McConville's abduction was one of the most notorious episodes of the vicious conflict known as The Troubles. Everyone in the neighborhood knew the I.R.A. was responsible. But in a climate of fear and paranoia, no one would speak of it. In 2003, five years after an accord brought an uneasy peace to Northern Ireland, a set of human bones was discovered on a beach. McConville's children knew it was their mother when they were told a blue safety pin was attached to the dress--with so many kids, she had always kept it handy for diapers or ripped clothes.

Patrick Radden Keefe's mesmerizing book on the bitter conflict in Northern Ireland and its aftermath uses the McConville case as a starting point for the tale of a society wracked by a violent guerrilla war, a war whose consequences have never been reckoned with. The brutal violence seared not only people like the McConville children, but also I.R.A. members embittered by a peace that fell far short of the goal of a united Ireland, and left them wondering whether the killings they committed were not justified acts of war, but simple murders.

From radical and impetuous I.R.A. terrorists such as Dolours Price, who, when she was barely out of her teens, was already planting bombs in London and targeting informers for execution, to the ferocious I.R.A. mastermind known as The Dark, to the spy games and dirty schemes of the British Army, to Gerry Adams, who negotiated the peace but betrayed his hardcore comrades by denying his I.R.A. past--Say Nothing conjures a world of passion, betrayal, vengeance, and anguish.

LONGLISTED FOR THE NATIONAL BOOK AWARD

WINNER OF THE ORWELL PRIZE

"Resolutely humane. . .Say Nothing [has an] exacting and terrifying lucidity. . .meticulously reported. . .Keefe's narrative is an architectural feat, expertly constructed out of complex and contentious material, arranged and balanced just so. . .an absorbing drama."
—JENNIFER SZALAI, The New York Times

"Say Nothing has lots of the qualities of good fiction. . . Keefe is a terrific storyteller. . .He brings his characters to real life. The book is cleverly structured. We follow people--victim, perpetrator, back to victim--leave them, forget about them, rejoin them decades later. It can be read as a detective story. . .What Keefe captures best, though, is the tragedy, the damage and waste, and the idea of moral injury. . .Say Nothing is an excellent account of the Troubles.
—RODDY DOYLE, The New York Times Book Review

"An exceptional new book. . .explores this brittle landscape [of Northern Ireland] to devastating effect.  . .Fierce reporting. . . It is a dizzying panorama, yet Mr. Keefe presents it with clarity."
—MICHAEL O'DONNELL, The Wall Street Journal

"Say Nothing investigates the mystery of a missing mother and reveals a still-raw violent past. . .The book often reads like a novel, but as anyone familiar with his work for The New Yorker can attest, Keefe is an obsessive reporter and researcher, a master of narrative nonfiction. . .An incredible story."
—Rolling Stone

"Haunting. . .As a cautionary tale, Say Nothing speaks volumes — about the zealotry of youth, the long-term consequences of violence and the politics of forgetting."
—DEVLIN BARRETT, The Washington Post

"As the narrator of a whodunit. . .[Keefe] excels, exposing the past, layer by layer, like the slow peel of a rotten onion, as he works to answer a question that the British government, the Northern Irish police and the McConville family has been seeking the answer to for nearly 50 years. . .Say Nothing is a reminder of Northern Ireland's ongoing trauma. And with Brexit looming, it's a timely warning that it doesn't take much to open old wounds in Ireland, and make them fresh once more."
—PADDY HIRSH, NPR

"Meticulously reported, exquisitely written, and grippingly told, Say Nothing is a work of revelation. Keefe not only peels back, layer by layer, the truth behind one of the most important and mysterious crimes of a terrible conflict; he also excavates the history of the Troubles, and illuminates its repercussions to this day."
—DAVID GRANN, #1 New York Times bestselling author of Killers of the Flower Moon

"Patrick Radden Keefe's gripping account of the Troubles is equal parts true-crime, history, and tragedy. Keefe's incisive reporting reveals the hidden costs of the Troubles, illuminating both the terrible toll of the conflict, and how it continues to reverberate today. A must read."
—GILLIAN FLYNN, #1 New York Times bestselling author of Gone Girl

“Patrick Radden Keefe uses the old Irish phrase, ‘Whatever you say, say nothing,’ to suggest and to say just about everything.  Keefe's great accomplishment is to capture the tragedy of the Troubles on a human scale.  By tracing the intersecting lives of a handful of unforgettable characters, he has created a deeply honest and intimate portrait of a society still haunted by its own violent past. Say Nothing is a bracing, empathetic, heartrending work of storytelling.”
—COLUM McCANN, New York Times bestselling author of Transatlantic and Let the Great World Spin, Winner of the National Book Award

"Patrick Radden Keefe has the rare ability to convey an intimate story that powerfully illuminates a much larger one.  Combining the skills of an investigative journalist with the storytelling power of a suspense novelist, Keefe brilliantly represents the menace and intrigue that devastated Belfast during The Troubles, and shows the course of ordinary lives headed toward inevitable and awful collision. By turns gripping and profoundly revelatory, Say Nothing shines a brighter light on Northern Ireland's tragic past than any history book."
—SCOTT ANDERSON, New York Times bestselling author of Lawrence in Arabia

“A shattering, intimate study of how young men and women consumed by radical political violence are transformed by the history they make, and struggle to come to terms with the blood they have shed, Say Nothing is a powerful reckoning. Keefe has written an essential book.”
—PHILIP GOUREVITCH, author of National Book Critics Circle Award winner We Wish to Inform You That Tomorrow We Will Be Killed With Our Families and The Ballad of Abu Ghraib

“Smart, searching, and utterly absorbing, Say Nothing sweeps us into the heart of one of the modern world’s bitterest conflicts and, with unusual compassion, walks us back out again along the road to reconciliation. This is more than a powerful, superbly reported work of journalism. It is contemporary history at its finest.”
—MAYA JASANOFF, author of the National Book Critics Circle Award-winning Liberty’s Exiles and The Dawn Watch

“Say Nothing is a piercing inquiry into the nature of political violence and its aftermath, by one of the best reporters in the United States. In this beautifully written book, Patrick Radden Keefe delves into the heart of the IRA, chronicling the worst years of the Troubles and the ghosts that continue to haunt Belfast even now that the fighting is over. Faulkner had it right: 'The past is never dead. It’s not even past.'”
—PETER BERGEN, author of Manhunt: The Ten-Year Search for Bin Laden From 9/11 to Abbottabad

"[Keefe] incorporates a real-life whodunit into a moving, accessible account of the violence that has afflicted Northern Ireland... Tinged with immense sadness, this work never loses sight of the humanity of even those who committed horrible acts in support of what they believed in."
—Publishers Weekly, *starred review*

"A searing reflection on the Troubles and their aftermath... Masterly."
—The Economist

Cheers to Your Ears: Match Your Fave Brew to Your Next ListenFaint of Heart? Beware These True Crime ListensIrish Authors You Should KnowSee More