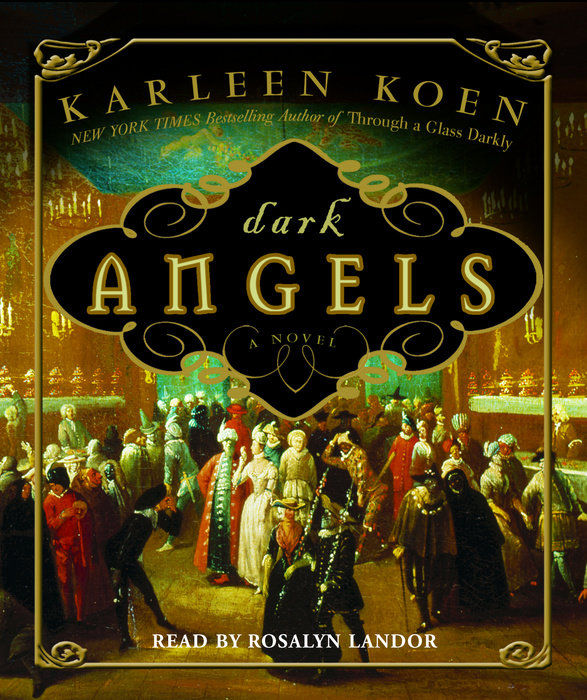 The long-awaited prequel to Koen’s beloved Through a Glass Darkly, Dark Angels is a feast of a novel that sparkles with all the passion, extravagance, danger, and scandal of seventeenth-century England.

Alice Verney is a young woman intent on achieving her dreams. Returning to England after a messy scandal forced her to flee to Louis XIV’s France, Alice is anxious to re-establish herself by regaining her former position as a maid of honor to Charles II’s queen and marrying the most celebrated duke of the Restoration.

But all is not as it seems in the rowdy, merry court of Charles II. Since the Restoration, old political alliances have frayed, and there are whispers that the king is moving to divorce his barren queen, who some wouldn’t mind seeing dead. Alice, loyal only to a select few, is devoted to the queen, and so sets out to discover who might be making sinister plans—and if her own father is one of them.

When a member of the royal family dies unexpectedly, the stakes are raised. As Alice steps up her efforts to find out who is—and isn’t—true to the queen, she learns of shocking betrayals throughout court, and meets a man who she may fall in love with—and who could spoil all of her plans. With the suspected arrival of a known poison-maker, the atmosphere in the court electrifies, and suddenly the safety of the king himself seems uncertain. Secret plots are at play, and war is on the horizon—but will it be with the Dutch or the French? And has King Charles himself betrayed his country for greed?

Unforgettable in its dramatic force, here is a novel of love and politics, of romance and betrayal, of power and succession—and of a resourceful young woman who risks everything for pride and status in an era in which women were afforded little of either.
Read More
“A delicious and dark adventure set within the magnificent sweep of the seventeenth-century courts of Charles II of England and Louis XIV of France. Koen’s excellent research and fully drawn characters bring to life the lavish wealth and glamour, the scheming, and the deeply human emotions of a fascinating era.” —Jean M. Auel, New York Times bestselling author of The Shelters of Stone

“I loved Dark Angels, I absolutely gobbled it up! Reading it is like stepping into a time machine that sweeps you back to all the drama and intrigue of the English Restoration. The characters are so vivid, the period detail incredible and the plot is completely riveting; a powerful blend of history, romance, adventure and mystery.”  —Susan Carroll, author of The Courtesan

“Grand and sweeping in the tradition of Forever Amber, the author immerses the reader in history, romance, suspense and the deep, dark secrets of the human heart. Dark Angels is an engrossing novel of royal and racy Restoration England. A triumph!” —Karen Harper, USA Today bestselling author of The Last Boleyn

“A richly-textured novel that brings to life the extravagant, scandalous court of Charles II, Dark Angels sweeps the reader into a world in which ambition and betrayal are commonplace–but love is not. Fans of Dorothy Dunnett and Anya Seton will revel in this sumptuous page-turner!” —India Edgehill, author of Wisdom’s Daughter
Read More