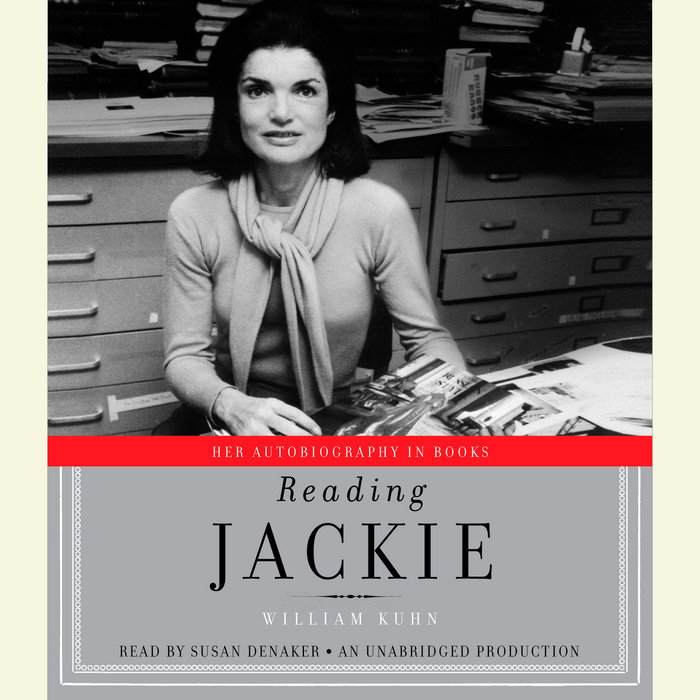 Jacqueline Kennedy Onassis never wrote a memoir, but she told her life story and revealed herself in intimate ways through the nearly 100 books she brought into print during the last two decades of her life as an editor at Viking and Doubleday. Based on archives and interviews with Jackie's authors, colleagues, and friends, Reading Jackie mines this significant period of her life to reveal both the serious and the mischievous woman underneath the glamorous public image.

Though Jackie had a reputation for avoiding publicity, she willingly courted controversy in her books. She was the first editor to commission a commercially-successful book telling the story of Thomas Jefferson’s relationship with his female slave.  Her publication of Gelsey Kirkland's attack on dance icon George Balanchine caused another storm. Jackie rarely spoke of her personal life, but many of her books ran parallel to, echoed, and emerged from her own experience. She was the editor behind bestsellers on the assassinations of Tsar Nicholas II and John Lennon, and in another book she paid tribute to the allure of Marilyn Monroe and Maria Callas. Her other projects take us into territory she knew well: journeys to Egypt and India, explorations of the mysteries of female beauty and media exploitation, into the minds of photographers, art historians, and the designers at Tiffany & Co.

Many Americans regarded Jackie as the paragon of grace, but few knew her as the woman sitting on her office floor laying out illustrations, or flying to California to persuade Michael Jackson to write his autobiography. Reading Jackie provides a compelling behind-the-scenes look at Jackie at work: how she commissioned books and nurtured authors, as well as how she helped to shape stories that spoke to her strongly. Jackie is remembered today for her marriages to JFK and to Aristotle Onassis, but her real legacy is the books that reveal the tastes, recollections, and passions of an independent woman.

Read More
“William Kuhn reveals the Jackie I knew as a person and professional: serious, smart, intuitive about ideas and aesthetics, but also down to earth in the sense of understanding the potential audience for a book. In Reading Jackie I learned so much about her I didn't know, and Kuhn tells the story with such flowing grace of phrase and structure. A splendid work.”
—Bill Moyers

“Jackie appears (as she was) a well-liked, respected colleague, often slyly funny and not given to showboating ... Seeing Jackie kneeling on her office floor going through page layouts gives us a new image to keep that myth alive ... If we're going to have a myth, why not one with her nose in a book?”
—The Washington Post

“Unexpectedly and intelligently dishy … In the end, this is quite a fascinating portrait of a complex woman, who had the interests and enthusiasms of her class and was allowed to indulge those passions with singular force and focus.”
—The Boston Globe

“A revealing, readable, and insightful book. Readers of biographies of iconic figures will eat this up ... Kuhn’s respectful approach would probably have met with Onassis’s approval.”
—Library Journal

"A clever, surprisingly substantial take on the life of Jaqueline Onassis ... Both respectful and scintillating."
—Kirkus Reviews

“Kuhn describes in fascinating detail the final third of Jackie's life and argues persuasively that the books she edited or helped bring to publication shed light on her inner life, forming an autobiography of sorts ... Kuhn's originality of research is striking. Many of his interviews were conducted with Jackie's colleagues, authors and friends, and they often provided him with fresh and intriguing details about her life ... A treat for bibliophiles and Jackiephiles — and especially for those for whom those interests overlap — Kuhn's insightful book sheds welcome light on a vital, and previously neglected, aspect of her life.”
—Richmond Times-Dispatch

“The best way to get beyond the well-beaten ground of the facts of [Jackie’s] life is absolutely through her books ... Kuhn definitely did his research, interviewing former colleagues, friends, and authors, and they sing like birds ... In the end we all have our own frame of reference for Jacqueline Lee Bouvier Kennedy Onassis, debutante, queen of Camelot, socialite, widow, kingmaker, and editor of books. She was so much more than that pink suit. I believe she led the last generation of icons of whom we demanded substance. Book publishing is slow to change, so if you want some fly-on-the-wall insight, you'll still get it in Reading Jackie, as well as Jackie-dish you won't find anywhere else.”
—The Austin Chronicle

“A surprisingly insightful and intriguing look at the woman behind the glamorous façade ... This is not a startling exposé, but a graceful, perceptive and respectful look (with a bit of behind-the-scenes eavesdropping) at a most unlikely working girl ... Through the book topics she chose and the literary relationships she cultivated, Jacqueline Bouvier Kennedy Onassis, while never an open book, is strikingly revealed—at least in elegant cameo relief.”
—BookPage

"William Kuhn provides a thorough, well-researched, and insightful biography that focuses on [Jackie's] life as editor, but incorporates it as the centerpiece for understanding the fullness of this woman of unsurpassed celebrity who developed a life and career of her own. She emerges as an accomplished editor as well as perhaps America's most iconic woman of the 20th century."
—The Post and Courier

“A fascinating window into an aspect of Jackie Kennedy Onassis that few of us know.”
—USA Today

"In his impeccably researched book, Kuhn unearths plenty of juicy revelations... Enlightening and surprising... Reading Jackie [is] a fascinating book."
—The Buffalo News

"This is a rigorously researched book that doesn't shrink from having a go at the question that Gloria Steinem once asked Ms. Magazine, 'Why does this woman work?'"
—Avenue Magazine