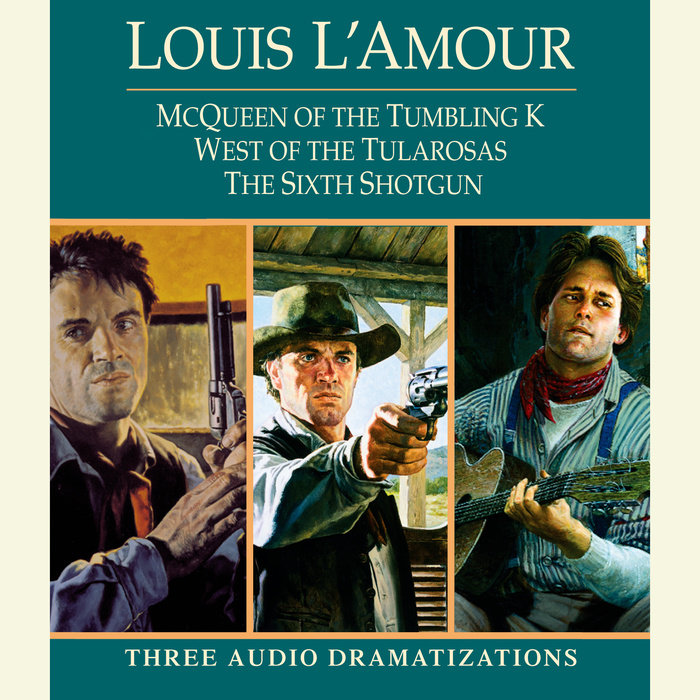 McQueen of the Tumbling K
Ranch foreman Ward McQueen recognizes trouble when he sees it-and trouble is what the Texan sees when he spies the tracks of a wounded man in the middle of the big Tumbling K spread. In town, he learns that a tinhorn gambler has just won the ranch next to the Tumbling K in a dirty card game--and is turning his oily gaze toward the K's pretty owner, Miss Ruth Kermitt.

Sure as shooting, McQueen knows the shifty-eyed parlor snake has something to do with the tracks, but before he can prove it to Ruth Kermitt. McQueen finds himself ambushed, dry-gulched, and left in a shallow grave to die--

West of the Tularosas
Pelona was a strange town, and Ward McQueen was a stranger to it. The stalwart foreman of the Tumbling K had come to the high country to take legal possession of the Firebox range. But the sight that greeted him when he arrived was an ugly one: the battle-stained and bullet-ridden body of its former owner. It was clear that the young Jimmy McCracken had gone out fighting, for his killers left behind a trail of blood. Now McQueen has followed that trail--straight to Pelona, a town so full of double-dealings and trickery that the truth can only be uncovered from behind the barrel of a gun--

The Sixth Shotgun
The gallows are going up in Canyon Gap and wild-spirited Leo Carver is going to swing. A known troublemaker without an alibi, Leo certainly had motives for holding up the stage and killing two men, yet he still proclaims his innocence. There's a lot of folks who want to believe him, because although Leo Carver is a hard-living, free-spending maverick, he is the kind of man the West needs. But as an angry mob forms outside the jail demanding a hanging, a beautiful woman is asking questions--the kind that could uncover a smoking shotgun--and a twisted motive for murder.
Read More