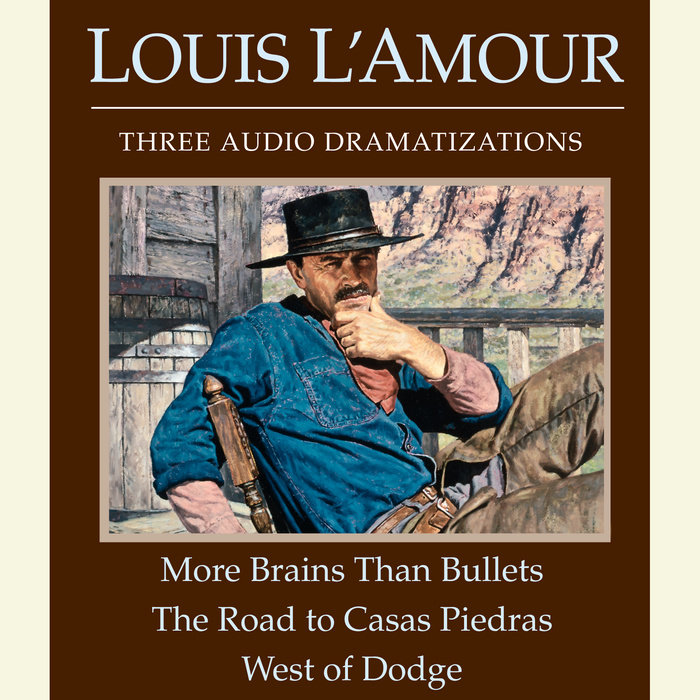 Written by: Louis L'Amour
Read by: Dramatization
3 Hours and 4 Minutes Imprint: Random House Audio Genre: Fiction - Westerns Release Date: April 30, 2013
The Road to Casas Piedras
In the midst of a lively country dance, gunshots ring out at the stagecoach station and Texas Ranger Chick Bowdrie finds the station's master sprawled in a pool of his own blood. Twelve thousand dollars are missing. And an innocent man has been murdered. And it's up to Chick to bring the killer to justice. With the unerring instincts that make him one of the best trackers in the Texas Rangers, Chick locates the killer's camp--and his lifeless body, courtesy of a double-crossing accomplice. But the bloodshed won't end unless Chick can stop the mastermind behind the robbery, an unlikely schemer whose greed makes good men bad--and careless men dead.

More Brains Than Bullets
Banker Tom Lindsay made a bad decision when he decided to do business with Ross Yerby. Yerby convinced Tom to print a few extra greenbacks to help him trade some cattle in exchange for half the profit. What Tom hadn't figured into the equation was Ross losing the money, and returning -- desperate -- for more. An argument between the two men goes bad, Lindsay is killed, and Yerby flees with a bundle of Lindsay's cash in tow.

With no witnesses to the robbery turned murder, the first accusing finger is pointed at Lindsay's assistant Bill Culver, who's conveniently absent when Lindsay's body is discovered. But Texas Ranger Chick Bowdrie, who's just arrived in town on a different matter, decides to take a detour and try to find Lindsay's killer. What he finds is a second victim -- but this one's still alive.

West of Dodge
Where the real frontier begins...

A young cowpuncher stakes a claim that can only be sealed with fists and a .44 Colt.... A gunfighter, tired of violence, finds himself pushed down a trail of bloody revenge.... From purple sage to gambler's gold, from a señorita's tempting smile to a splash of blood in the dust, here are stories with a distinctive L'Amour twist.

A quiet farmer defends his honor in a moment of panic and luck...only to find true courage on the run from the dead man's brothers. A young drifter defends a lady's honor...and finds himself the quarry of a hanging posse. An aging marshal with a reputation as a crack shot faces a stranger who knows his secret. With relentless suspense and unforgettable drama, Louis L'Amour once again paints a vivid portrait of our western heritage that will live forever.
Read More