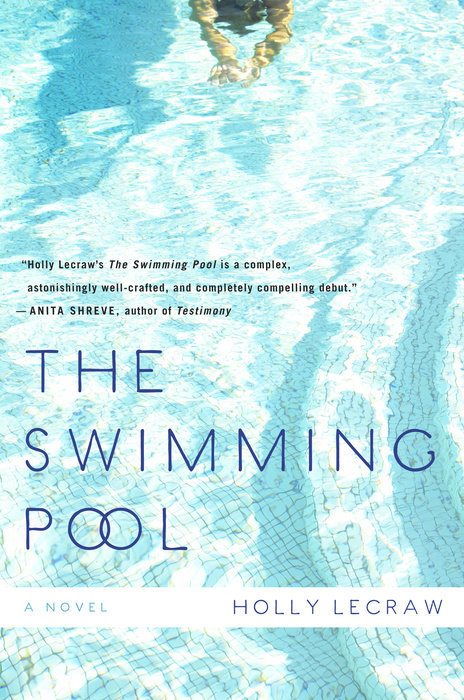 A heartbreaking affair, an unsolved murder, an explosive romance: welcome to summer on the Cape in this powerful debut.Seven summers ago, Marcella Atkinson fell in love with Cecil McClatchey, a married father of two. But on the same night their romance abruptly ended, Cecil's wife was found murdered—and their lives changed forever. The case was never solved, and Cecil died soon after, an uncharged suspect. Now divorced and estranged from her only daughter, Marcella lives alone, mired in grief and guilt. Meanwhile, Cecil's grown son, Jed, returns to the Cape with his sister for the first time in years. One day he finds a woman's bathing suit buried in a closet—a relic, unbeknownst to him, of his father's affair—and, on a hunch, confronts Marcella. When they fall into an affair of their own, their passion temporarily masks the pain of the past, but also leads to crises and revelations they never could have imagined. In what is sure to be the debut of the season, The Swimming Pool delivers a sensuous narrative of such force and depth that you won't be able to put it down.
Read More
"Holly LeCraw's THE SWIMMING POOL is a complex, astonishingly well-crafted, and completely compelling debut."
-- Anita Shreve, author of Testimony

"THE SWIMMING POOL is more than an auspicious debut. Holly Lecraw's first novel is gripping, passionate, and beautifully written from start to finish, a moving chronicle of two damaged families struggling to free themselves from a complex web of secrets and lies."
-- Tom Perrotta,  author of Little Children

“THE SWIMMING POOL would have knocked me over if Holly LeCraw already had a shelf full of prize-winning books to her credit. What an intelligent, beautifully plotted, intriguing and un-put-downable story about family secrets that interlock and haunt. I was totally captivated and lost in admiration for this masterful novel.”
-- Elinor Lipman, author of The Family Man

"THE SWIMMING POOL is as riveting and psychologically complex as Hitchcockian film noir. LeCraw displays perceptiveness and intelligence in weaving together a tale of entangled lies, complicity, betrayals, and unstoppable consequences."
-- Amy Tan, author of The Joy Luck Club and The Bonesetter’s Daughter

"THE SWIMMING POOL is a riveting family story that will hold the reader enthralled from the very first page.  With great suspense, Holly LeCraw skillfully orchestrates the collision course of a present-day love affair with the dark mysteries of a family’s past. She is a wonderful writer."
-- Jill McCorkle, author of Going Away Shoes