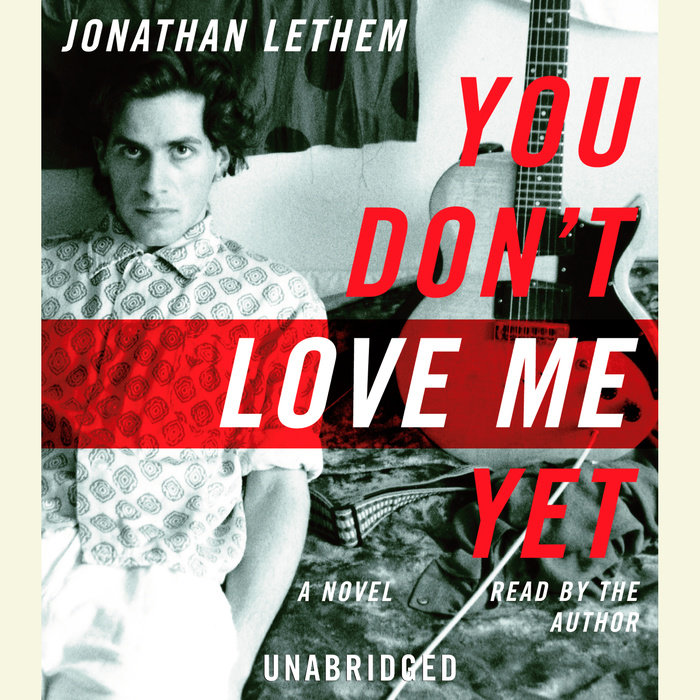 You Don't Love Me Yet

1. In the novel's opening scene, Lucinda and Matthew break up at an art museum (and seal their breakup by having sex inside one of the pieces on display). She meets the Complainer while taking part in a conceptual art piece, and the band plays its first live set at an art happening. What role does art play in this novel, and what might Lethem be suggesting about its relation to pop music? Does he seem to view musicians as another species of artist or, perhaps, as the opposite of artists?

2. What is Lucinda's reason for breaking up with Matthew, and why do they get back together at the novel's end? How would you compare their relationship to Lucinda's fling with the Complainer? What does the Complainer give her that Matthew couldn't? Is Lucinda flighty—this is someone who uses a giant revolving foot as an advice column—or might she be expressing some fundamental bassist's trait, the bassist being “the only player to absorb everyone's reactions” [p. 15]? Similarly, is Matthew somehow a quintessential lead singer? Is Denise a quintessential drummer? Discuss the ways Lethem develops his characters.

3. What is the significance of the characters' eccentric—and sometimes outlandish—names? Do they say something about their owners' essential traits? Is Matthew truly plangent? Is Carlton Vogelsang, whose name comes from the German for “fowling,” a hunter of a different sort? Or are these names Lethem's way of announcing that his book is a comedy and that we shouldn't take anyone in it too seriously?

4. Lucinda describes Falmouth's art project as “a fake office that needs fake office workers to answer real telephone calls” [p. 4]. Is the complaint line's fakeness the reason for its mushrooming popularity? Might the people who call it somehow intuit its spuriousness? Where else does You Don't Love Me Yet explore the opposition between the real and the fake, as well as their occasional interdependence? Which of the book's characters strike you as authentic and which as phonies? At what points do its real people start acting like counterfeits, and at what points do Lethem's phonies reveal a hitherto unsuspected authenticity? Do you think that Lethem equates phoniness with artifice and realness with artlessness? Is the disheveled Bedwin, who plays guitar sitting down and has to be reminded to eat, more authentic than the immaculate and dictatorial Falmouth?

5. From their first conversation, the Complainer gives Lucinda repeated warnings of how he will end up treating her. Why might she be drawn to a man who says he has monster eyes and speaks of his “compulsive need to disappoint” [p. 68]? Is this just the familiar pathology of self-help books? Is Lucinda a woman who loves too much? Or is the allure of the dangerous, the hopeless and disappointing a theme that runs through the entire book?

6. What do you make of the subplot involving Shelf the kangaroo? Why does Matthew respond so deeply to her unhappiness, which may exist only in his imagination? By mailing him a Polaroid of the flyer with a pleading caption, does Lucinda inadvertently provoke her kidnapping? Is Matthew's kangaphilia—his obsessive, inconvenient love for an inappropriate and smelly love object—a version of what music fans feel for their favorite groups?

7. Explaining his writer's block, Bedwin says, “I don't believe in the place where the sentences come from anymore” [p. 21]. Compare this with Carl's jaundiced observation that “the world is full of tellers” [p. 73] and his wish that Lucinda keep some aspect of their encounter a secret, one so complete that it can't even be named. Consider that for most of the novel the band is also nameless and that soon after getting a name—appropriately, Monster Eyes—it breaks up. Why might so many of the novel's characters be suspicious of language? Do you think the author shares this suspicion? What are we to make of the fact that Carl is a brilliant and inexhaustible talker who makes his living crafting phrases and that the language-agnostic Bedwin spends his time obsessively watching the same film, not for its acting or camera work but for the seemingly incidental scraps of written language that appear in the background of certain scenes?

8. Discuss the role plagiarism plays in this book. When Lucinda takes Carl's phrases to Bedwin is she using his words or stealing them? Is there a difference? Is Carl justified in portraying himself as the band's true songwriter, or do you agree with Denise when she sneers, “The lyrics you wrote . . . wouldn't amount to anything at all if we hadn't played them onstage” [p. 154]? Does the disastrous outcome of Carl's one performance with the group bear her out? The ambitious may wish to inform the discussion by reading Lethem's essay “The Ecstasy of Influence” in the February 2007 Harper's.

9. Is there something inherently ironic about a professional phrase-mongerer trying to reinvent himself as a rock musician? In hip lyrics bubbling up from the same artesian spring that produces slogans for tee shirts and coffee mugs? Or is all pop characterized by a tension between commercialism and cult, purity and crassness? In this regard, consider Carl's sticky aphorism, “You can't be deep without a surface” [p. 153]. How might this apply to the issue of plagiarism?

10. “I want what we all want,” Carl says, summing up his ambitions. “To move certain parts of the interior of myself into the external world to see if they can be embraced” [p. 152]. Is this, indeed, what the other characters—Lucinda, Denise, Matthew, Bedwin, Falmouth—want? Is it a description of the desire to create or the desire for fame? Considering that the band's notion of fame is pretty parochial and the respective size of the audiences for popular slogans and hip song lyrics, might Carl be guilty of bad judgment?

11. Is Carl the only reason why the band's appearance on The Dreaming Jaw ends so badly? What might it mean that this is the best they've ever played, and that no one is there to listen? How does this outcome fit in with Carl and Bedwin's common disaffection from language, or with Denise's complaint that “anyone who likes us already likes us for the wrong reason” [p. 121]? Are failure and unpopularity somehow essential to the novel's schema of hipness?

12. Compare this novel's scenes of love-making with its scenes of music-making. As portrayed by Lethem, what do these activities have in common? How do they differ? Are they opposed? Do developments in the novel suggest that one must make a choice between sexual and artistic fulfillment?

13. Considering several of her habits, her ill-considered liaisons with two bandmates and a man she meets on a complaint line, her boozy disregard for sound-checks, and the way she baits Matthew for his chivalry to glum marsupials, is Lucinda a bad person, perhaps as bad as Denise and Bedwin think she is? If not, what redeems her? How is she different at the novel's end? What odds do you give her and Matthew's prospects for romantic happiness and/or creative success?

14. For extra credit. How does Monster Eyes's career arc compare to those you might see on a VH-1 “Behind the Music” special? What real bands does it most resemble?

15. As a group, compose lyrics for any of the following songs: “Astronaut Food,” “Canary in a Coke Machine,” “Temporary Feeling” and “Secret From Yourself.”