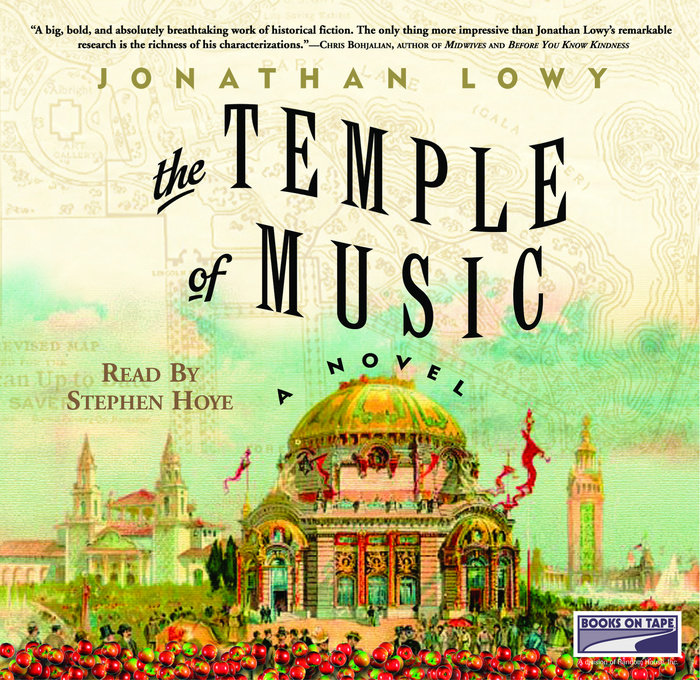 The Temple of Music

1. McKinley is captive audience and vulnerable prey to both the galvanizing ambition of Mark Hanna and the melancholy degeneration of Ida. In both relationships, he reacts rather than acts of his own volition. Does Lowy convey McKinley’s milquetoast demeanor as a tragic flaw or something more sinister? How does his character morph in the course of the novel?

2. What role does Morris Vandeveer nee Steinglitz, condom magnate, play in the novel? Is he essentially comic relief, or is there more to his “Ragged Dick” tale? What storylines does the author introduce via Morris’s outlandish party in Part One? What is the point of the hunt he provides his guests?

3. The ramblings of an unnamed British anthropologist concerning the intellectual limitations of the Negro brain–spoken casually in front of a black waiter at Morris’s party–posits the theme of racial prejudice that marbles the narrative. Does this theme simply flesh out the description of the era, or does it have a more specific function? Is it significant that it is introduced into the story by a non-American?

4. Leon is haunted by the memory of his mother’s death, by the doctor who recommended an abortion to save her life, and by the priest who forbade it. What point is the author making about the roles of science and religion in America at the turn of the last century? Where is this dichotomy revisited? By what logic does Leon’s final crime redress his mother’s tragedy?

5. Ambrose Bierce spends much of the novel slumped, drunk, on a couch in Hearst’s office. Why then does his character receive such a grandiose introduction in Part Two? What makes him one of the era’s “geniuses of irony”? What famous slogan does he pen that later threatens Hearst’s empire? Is the line tongue-in-cheek?

6. What is Hearst’s motivation for rousing a public demand for war in Cuba?

7. From Wagner arias to Bach fugues to a John Philip Sousa brass band, the novel is filled with music references. William Jennings Bryan muses, “my speeches are music” (p. 148). Leon experiences Emma’s oratory as “singing…wisps of music fill the air” (p. 236). Alex Berkman’s prison stay is punctuated by hallucinations of a chirping bird. Emma employs “a violin string” as metaphor for compassionate protest (p. 248). Ida’s close encounter with death involves visions of “violins and an organ and a girls’ choir” (p. 258). What is the author’s intent with this recurring motif?

8. In the preface to her recent book Assassination Vacation, detailing her pilgrimage to the sites associated with the deaths of Presidents Lincoln, Garfield, and McKinley, Sarah Vowell writes, “I am only slightly less astonished by the egotism of the assassins, the inflated self-esteem it requires to kill a president, than I am astonished by the men who run for president. . . . The egomania required to be president or a presidential assassin makes the two types brothers of sorts.” Are there parallels to be drawn between Lowy’s versions of William McKinley and Leon Czolgosz? Do they strike you as egomaniacs, or as hapless followers? How do you account for the enduring public curiosity and even romanticization of presidential assassination?

9. The Temple of Music blatantly lampoons the unprincipled “Robber Barons” and “money gods” of the Gilded Age, but also divulges the idiosyncrasies, weaknesses and absurdities of the various workers’ rights movements. Is any group or individual completely lionized in Lowy’s story? Is Ida portrayed as a purely innocent victim of circumstance? What about Megan Wisemki? James Parker?

10. One of the more curious incidents in the novel occurs early in Part One. In the frenzy of Morris’s choreographed hunt, Hanna bags “a pair of doves and the ear of a Negro servant. It was an accident: Hanna gave the man a dollar for his troubles” (p. 24). Later, the incident arises again, as Morris contemplates the empty husk of his once-grand Vandeveer mansion. Spying an object on the floor of the ballroom–“still unmistakably the ear of a Negro servant” (p. 262)–he is inspired by a sudden grasp of the American dream: “what this holy American trinity (Hanna, McKinley, the ear) teaches Morris will, he is certain, inspire . . . his return . . . to the moneyed American heavens. The key isn’t freedom, isn’t liberty, isn’t simply lust. It’s state-sanctioned savagery.” How do you interpret this enigmatic sequence? If Lowy is alluding to the New Testament Biblical passage in which “Simon Peter, having a sword, drew it and struck the high priest’s slave and cut off his right ear” in attempting to protect Jesus from incarceration (John 18:10), then who or what plays Jesus to Mark Hanna’s Simon Peter?

11. What role does childhood sexual abuse play in the formation of Emma Goldman’s anarchic principles? How do Leon’s experiences as a line worker affect his thought processes? Does Lowy suggest a link between the experience of abuse and the formation of radicalism?

12. How has the American socio-political landscape changed since the period Lowy explores in The Temple of Music? What legacies of the times have endured? Does Mark Hanna–commonly referred to as a “kingmaker” and the father of the modern, contribution-based political campaign–have any counterparts in or near the White House today?