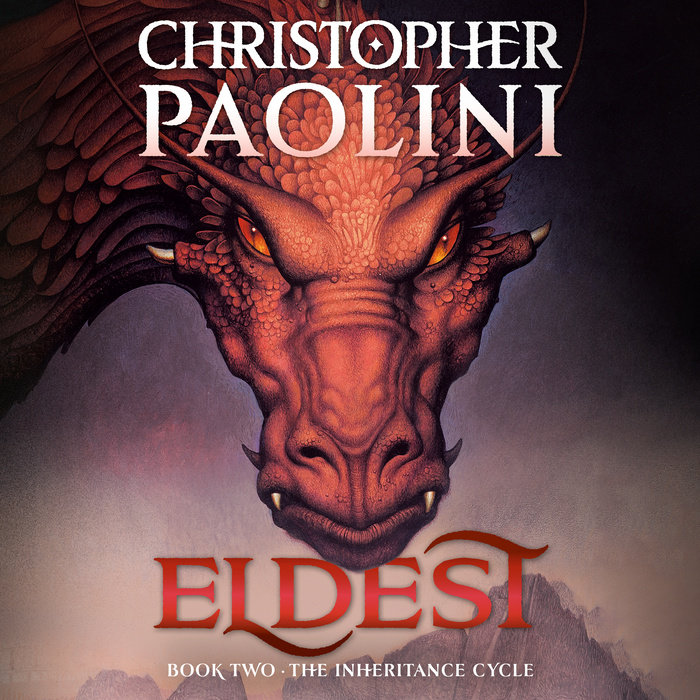 - Compare the different historic traditions of Alagaësia as they are explained in Eldest. Why do the dwarves, the elves, and the humans all have such different mythologies? What do their stories tell us about each of their races?

- What does Saphira tell Eragon about the dragons’ beliefs in Eldest? Compare what the dragons believe with what the dwarves and elves do.

- After reading Eldest, explain the origins of the animosity among the races of dragons, elves, dwarves, and humans. What are the effects of those ancient wars on the present day situation in Alagaësia?

- Why are the elves vegetarians? Why does Eragon become a vegetarian after living with them and studying with Oromis in Eldest?

- Compare the ways the different races live–the elves in the forest, the dwarves in their caves, the humans in cities and towns. How does the habitat of each of these peoples affect their way of life and their connection with their environment?

- Discuss who his parents might be. Why is his father’s identity a mystery, and why did his mother bring him to her brother to raise and then disappear? How does the reader’s understanding change after reading Eldest?

- What was Eragon’s life like before he found the dragon’s egg in the Spine in Eragon? How did his discovery of the egg change his life?

- Why was Eragon comfortable exploring the Spine when everyone else in his village was afraid of the place? What does the Spine represent to the other inhabitants of Carvahall? How does Roran convince them to overcome those fears in Eldest?

- Is it hard for Roran to convince the villagers to leave their homes in Eldest? What does he hope to find for them when they do leave? Why do some insist on staying behind?

- Why does Hrothgar make Eragon a member of his clan before he leaves Farthen Dûr in Eldest? What does this mean to Eragon?

- What feelings do Eragon and Roran experience when they meet again at the end of Eldest? Why is Roran so angry with Eragon? Can he forgive Eragon for Garrow’s death?

- When Murtagh tells Eragon who he really is at the end of Eldest, what effect does it have on him? Do you think what Murtagh tells him is true? What does it mean for Eragon’s future?

- In the last chapter of Eldest, Eragon thinks: “Fathers, mothers, brothers, cousins . . . It all comes down to family.” What does he mean? Who is Eragon’s true family? Where has he found his greatest sense of belonging?

- Discuss the importance of names in Christopher Paolini’s novels. How does it affect Eragon to learn that his name was also the name of the first dragon rider? How does he choose Saphira’s name in the first book? In Eldest, how is Eragon affected by others calling him “Shadeslayer”? How has Galbatorix gained control over Murtagh and why is that control so complete?

- In Eragon, Angela the fortuneteller says, “To know one’s fate can be a terrible thing.” Would you want to know your future if someone could tell you? Why does Eragon decide to hear her predictions? What does she mean when she says, “That freedom [to choose your fate] is a gift, but it is also a responsibility more binding than chains”? Which of her predictions (in the chapter titled “The Witch and the Werecat”) actually come true as the story continues in Eldest?

- How does it affect Roran when people start to call him “Stronghammer” in Eldest? Why does Roran take most of the village of Carvahall with him in his quest to rescue Katrina?

- How does Eragon change in the course of his studies with Oromis in Eldest? Which of his new powers are the result of hard training and which are the result of learning more about the use of magic? Is he, indeed, fulfilling a destiny or responding to his sense of duty and responsibility–or both?

- In Eragon, how does Eragon know that he can trust Brom enough to travel with him? Why does he leave his home and all that is familiar to him?

- Who are the Ra’zac and what do they represent to Eragon when he first encounters them in Eragon? Why do the Ra’zac return to Carvahall in Eldest? Why do they take Katrina away with them? Is it trust or fear that makes the people of Carvahall follow Roran into the wilderness?

- In the first book, when Eragon realizes that Arya is an elf, does it change his feelings about her? Why does he rescue her from the prison even though it puts his own safety in jeopardy? What is it that keeps Arya from returning Eragon’s affection in Eldest?

- When Eragon finds the stronghold of the Varden in the first book he is challenged and his mind probed by the Twins. Why did Ajihad trust the Twins? Are there clues in Eragon to indicate that the Twins were actually working for Galbatorix, as we discover in Eldest?

- What is Eragon’s greatest fear? What is Roran’s greatest fear? Do their fears affect the way they act and interact with others? Discuss their reunion in the last chapter of Eldest. Why does Roran strike Eragon? How do they regain their trust for each other?

5. Use and Abuse of Power

- Discuss the connection of magic to power in this story. Why does Eragon have to learn the use of magic so slowly, first from Brom (in Eragon) and then from Oromis (in Eldest)? Who are the other characters that can use magic and what are the limits on their magical powers?

- Why does the use of magic drain the energy of the person performing the magic? What are the ways that Eragon learns to control his use of magic and his energy in Eldest?

- In Eldest, is Murtagh able to use magic more effectively than Eragon? Why do you think this is so?

- Many fantasy novels deal with the struggle between forces of good and evil. Discuss the ways in which the Inheritance books explore this theme and which characters represent good and which represent evil. Are there some characters that you are still not sure about by the end of Eldest?

- Eragon begins with the Shade and his ruthless ambush of the elf we later learn is Arya. How did this Prologue affect your anticipation of the story to come? Why is the Prologue titled “Shade of Fear”? What do we learn of the Shade’s past when he is killed at the end of Eragon?

- How did Galbatorix establish his rule of Alagaësia? According to the history Brom shares in Eragon, what experiences turned Galbatorix into a cruel and feared ruler?

- The Urgals seem to be completely ruthless, yet Eragon is hesitant to kill them with his magic in Eragon. In the chapter called “A Costly Mistake,” why does he only use his magic to stun them? Why is he so upset when Murtagh kills Torkenbrand, the slave trader? By the end of Eldest, Eragon has different feelings about the Urgals. What has changed his mind?

- In Eldest Roran commits crimes in his efforts to save the people of Carvahall who have placed their trust in him; he kills, steals, and uses trickery to get what he needs. Can he justify what he has done in the name of helping others? How does he feel about the men he has killed?

- Why is Oromis so angry about the blessing that Eragon gave to the child in Farthen Dûr? What is the place of Elva in the story by the end of Eldest? Is her blessing/curse a force for good or for evil? How can it work both ways?

- Compare Eragon and his cousin Roran. How do Eragon’s and Roran’s journeys in Eldest parallel each other and how are they different? Describe the changes in each of them from the beginning of Eragon to the end of Eldest. What influences are most important on their growth? Which people and events are most important to their development?

- Compare Brom (in Eragon) and Oromis (in Eldest). How are they similar and how are they different? What does each of them contribute to Eragon’s training? Which of them, do you think, has the most influence on Eragon’s growth as a Rider?

- How would you describe Arya? Why does Arya reject Eragon’s romantic feelings in Eldest? What aspects of her personality contribute to their friendship and what keeps them from having a romantic relationship? How does Arya feel about being the daughter of the queen?

- Compare the magical qualities of Angela and Elva as we see them in Eldest. What do we know about each of them and how do their magical abilities contribute to the story? How do you feel about these characters–in terms of their trustworthiness?

- Compare the leadership styles of Nasuada and Orrin, the king of Surda, in Eldest. Why do the Varden go to Surda, and what help do they expect from Orrin?

8. One Step Beyond: Predictions

- At the end of the first book, Eragon hears a voice in his head, someone helping him to escape the horrors of Durza’s memories. In Eldest, we learn that person is Oromis, who will become Eragon’s trainer. What foreshadowing comes at the end of Eldest? Predict some of the plot of Book Three of Inheritance. What do you expect to happen?

- Who are the characters that might play a major role in the next book? Will Eragon come face-to-face with Galbatorix? Will he fight Murtagh again? Will Eragon and Roran be able to rescue Katrina? Who will provide the most assistance to Eragon?

- Why do you think Galbaltorix continues to gain strength, and how is he able to make Murtagh stronger than Eragon? How do you think Eragon and Saphira can develop the strength to combat the evil powers of Galbatorix?

- What kinds of good and evil do you hear about in the news of our world? Discuss examples from news stories that report events representing the good and evil in our society and in international news.

- Do you feel that some people have a destiny to fulfill or a special reason for living? Name people in history who had a strong responsibility to a cause for good or evil. (Possibilities might be Abraham Lincoln, Gandhi, and Martin Luther King for good causes and Attila the Hun, Adolf Hitler, and Josef Stalin for evil.)

- Name some characters from legend, literature, or film who represent the causes of good or evil. (Possibilities might be Luke Skywalker, King Arthur, Frodo for good; Darth Vader, Mordred, Sauron for evil.)