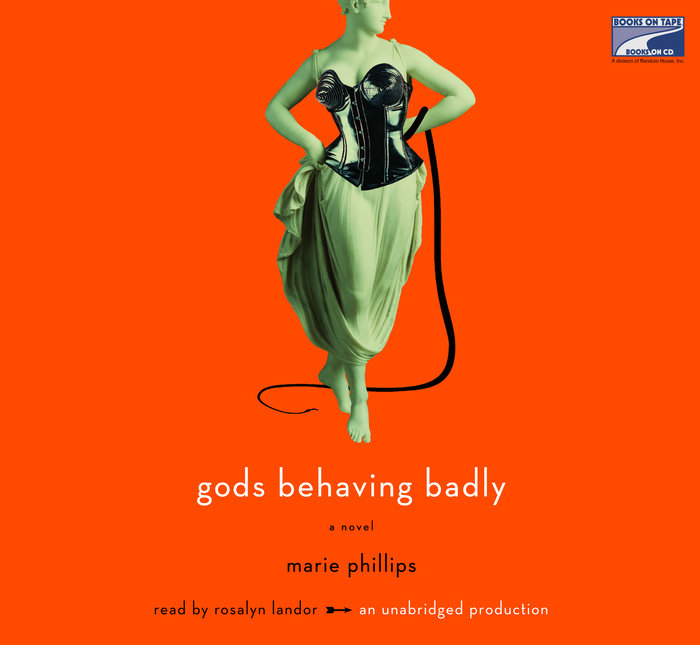 1. All the gods have modern jobs or hobbies. Are the choices right for the characters? Would you have chosen other jobs? (See the list of the main characters below as a helpful reminder)

Which character has the most convincing modern personality?

2. The book opens with two sexual scenes. How does sex affect the characters lives? Does Apollo know the difference between lust and love? Does Artemis’s prudishness mean that she understands the world more clearly as desire doesn’t cloud her judgment?

3. ‘In all of the angry fantasies [Neil] had had about Apollo, in all of the jealous hours that he had spent imagining Apollo and Alice in congress, and feeling inadequate as he compared his unimpressive form with Apollo’s glorious beauty, it had never once occurred to him that Apollo might be stupid.’ (p.195)

The characters in Gods Behaving Badly are either beautiful or brainy. Do you think this is an accurate description of the book? How important is each quality to the story?

4. Gods Behaving Badly is a very funny novel. What was your favourite comic moment? How well does the comedy work within the book?

5. Styx notes that Neil is ‘most unlike any hero who has visited me before.’ (p.224) How does the novel change your idea of what a hero is?

Cleanliness and dirt are a reoccurring theme in the novel. When the gods are at their weakest their house is filthy, and when Neil grieves for Alice he lets his flat deteriorate. Is dirt a way of hiding from feelings (e.g. grief) and also from the truth of dire situations?

7. a) ‘It’s not their fault,’ said Neil. ‘Nobody believes in them up there. Of course they’re not powerful any more.’ (p.251) Why don’t the gods realize this until Neil says it?

b) The gods act no better than the C-list celebrities who are worshipped by gossip magazines. Why do we happily follow the lives of celebrities rather than believe in the ancient gods?

c) How important is belief in the novel for: the Gods; for Neil, Alice and all the mortals in the book; and for you as a reader?

8. The book can be seen as mortals versus immortals. Do you think it is better to have infinite time but be doomed to repeat your mistakes? Or have finite time but possibly not make the most it?

9. Is Upper Street the perfect location for the entrance to the Underworld? Do you think the Greek gods would really have ended up living in London?

10. How does Marie’s description of the afterlife/Underworld differ from your ideas of death?