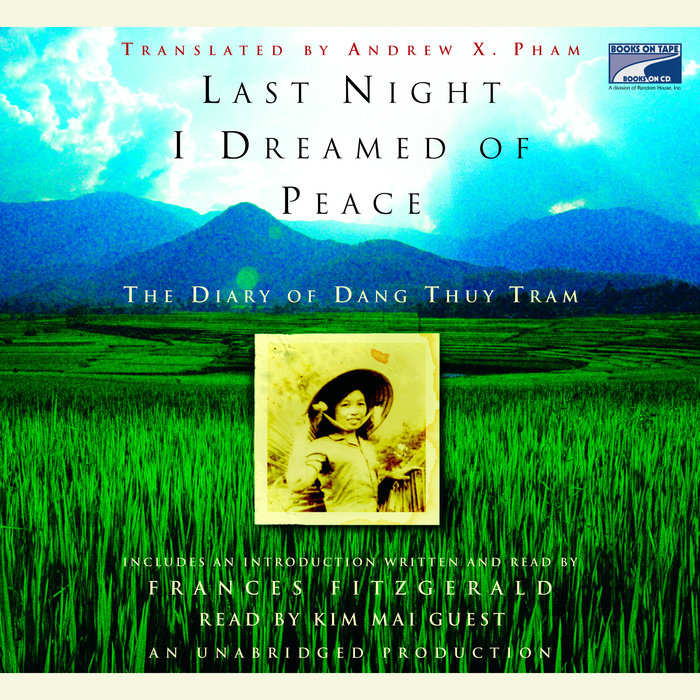 Last Night I Dreamed of Peace

1. Based on her own account of her life, what kind of person do you think Dang Thuy Tram was? How would you describe her character?

2. How much do you know about the Vietnam War? What was the mood of the country during the U.S. involvement? Discuss your personal experiences or memories of life during the war. How do you think this diary would have been received in America at the war’s end? How might this diary be controversial even now, more than thirty years after the war’s end?

3. Like Dang Thuy Tram’s diary, Anne Frank: The Diary of a Young Girl was published after the wartime death of it’s author. Now a classic, Anne Frank’s diary is a moving testament to a young girl’s hopeful spirit and faith in humanity as well as a glimpse of a life very different from our own. How do you think Last Night I Dreamed of Peace compares? Do you think this diary has the same kind of cultural relevance?

4. What special challenges does a translator face when working on a personal diary?

5. Discuss the universal losses of war. In any war, what do both armies have in common?

6. Thuy often speaks of a man she calls M. in her diary. She wills herself to forget him and devote herself more fully to the Communist party. Is she successful? How does Thuy respond to sympathy over her unrequited love for him?

7. Reread the entry from April 30, 1968, in which Thuy counts her blessings. What do her words reveal about her? Which do you think Thuy wants more, love for herself or freedom for Vietnam?

8. Why is gaining membership in the Communist party so important to Thuy? Why does she think she has been unable to get in? How does she feel when she is finally admitted?

9. Is Thuy a pessimist or an optimist? A romantic or a realist? Do you think she would agree with your accessment?

10. Discuss Thuy’s life at the clinic. What are the joys? The sorrows? The risks? What makes her so committed to her patients? Do you think she is well suited to the dangers she faces there? Why or why not?

11. How is Thuy a typical young woman? What makes her seem older than her years? Discuss the effects of war on innocence.

12. Thuy often speaks of her important friendships with both men and women, even calling those closest to her Little Brother or Big Sister. How might their living conditions and the long struggle contribute to the forming of such intense friendships?

13. Have you ever kept a diary? If so, why and when? Did you write it as if no one would ever see it, but you or were you conscious, on some level, of a future reader. Does anything in Thuy’s tone suggest her awareness of a reader other than herself? What did you think of her writing style in general? Were there any passages that seemed particularly evocative to you?

15. What are the lessons to be learned from Thuy’s diary? About humanity? About war? About love and courage?