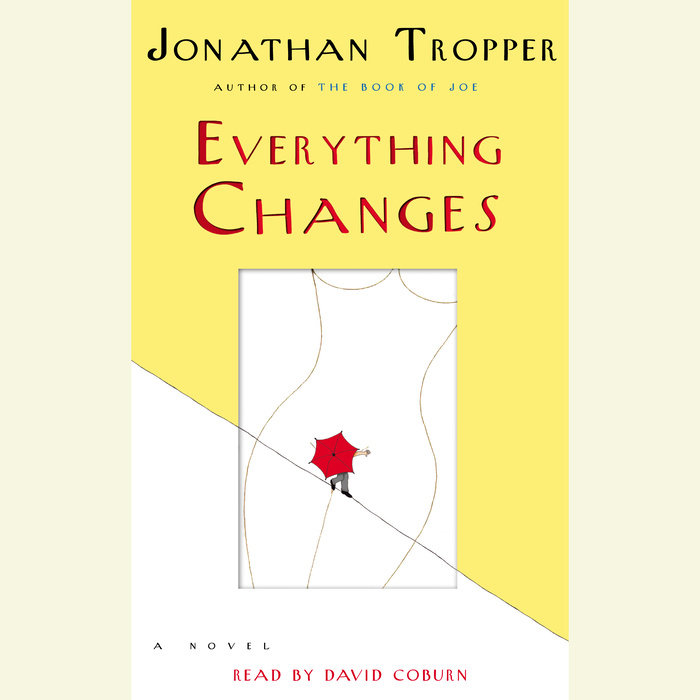 1. Everything Changes begins with an earthquake, in New York City no less. How does Zach interpret this event? What does it lead you to expect from the novel?

3. When Norm arrives for his surprise reunion, the first thing Zach notices is his father's bulge. What was your reaction to this theme of virility in comic proportions? How do the novel's characters view their own sexiness, including Pete (who wanted the Mustang to be his chick magnet)?

4. Zach's health scare gives him a quick lesson in urology, and mortality. What else does his experience with Dr. Sanderson teach him about himself, physically and emotionally?

5. In chapter Seven Zach recalls the wreck that took Rael's life. How do you picture Zach before the accident? In what way does it seem to have changed him? Were Rael and Tamara a good match?

6. In your opinion, what is the novel's turning point? What spurs Zach to face his true self? Can it be attributed to one event, or was it a gradual process that would have happened no matter what?

7. Chapters Ten and Eleven give us a glimpse of Matt as a performer, while Zach is botching a one-night stand with Jesse. What do Matt and Zach have in common at that point in their lives, besides being brothers?

8. How do Lela's sons perceive her? How does she compare to the other women in their lives?

9. Discuss the choices Jonathan Tropper made in crafting a storytelling voice for Zach. How does he weave new plot twists with Zach's memories? What is the effect of the passages that begin "this is what happens" and are written in the second person?

10. How does Zach's family compare to Hope's in ways that extend beyond material wealth? Does her overzealous father share any personality traits with Norm? Do Vivian and Lela have similar burdens to bear?

11. Zach shirks responsibility and fools around with other women. Does this mean he is following in his father's footsteps?

12. Zach and his family take on a number of bullies in the novel: bosses, snobs, a country club that Norm believes to be anti-Semitic, rude doctors, and Satch, who sold the car to Pete. How many of these battles do they win? How do they define victory?

13. Though Tamara didn't initially want children, she is devoted to her daughter. What is Sophie's role in Zach’s life? How does her presence shape the narrative?

14. What stays the same in Everything Changes? What are the constants in Zach's life?

15. What did Norm mean at the end of chapter Thirty-nine when he writes, "If all it took was the love in my heart, I'd be father of the year"? Was Henry the only reason he came back to his family? Could anything have made him stay? Could anyone have made him honest?

16. Why were Tamara and Zach so hesitant to acknowledge their attraction? Was it simply an issue of timing, or were they both afraid of something deeper?

17. What do you predict for Henry's new life with Zach? What will Henry's role be among his three colorful brothers?