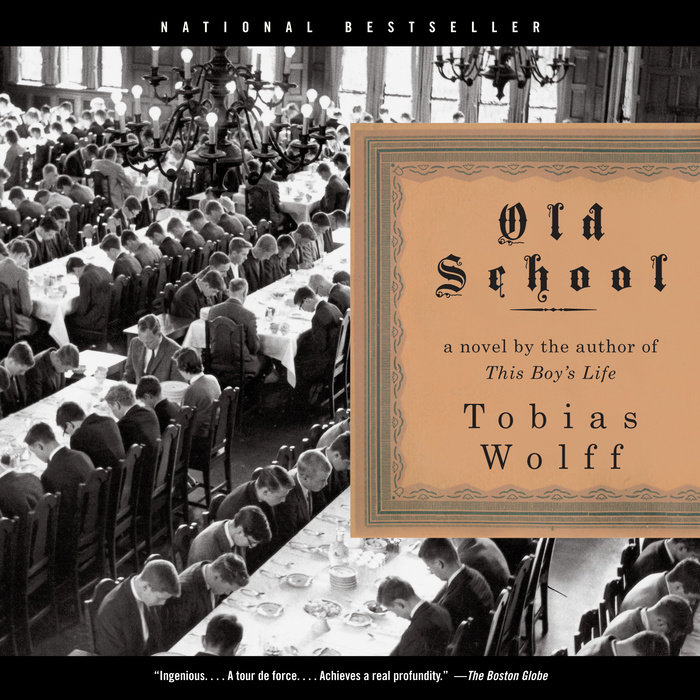 1. What is the effect of the first-person narrative style Wolff has chosen for this novel? What kinds of information—or perspectives—does the reader have access to? On the other hand, what kinds of information does first-person narration deny the reader? What terms might describe the narrator’s voice? Why is this narrative style so appropriate for this story?

2. About his desire to win the competition that would give him an audience with Robert Frost, the narrator says, “My aspirations were mystical. I wanted to receive the laying on of hands that had written living stories and poems, hands that had touched the hands of other writers. I wanted to be anointed” [p. 7]. Is his aspiration admirable? What does the boy not understand about how one becomes a writer? How seriously does he work at acquiring the skills of his craft?

3. In social interactions between boys at the school, much is left unsaid. Why is this? Consider the relationship between the narrator and his roommate Bill White [pp. 11–13, 139–40]. What problems of interpretation arise when so little talking is done? Why is this relationship so problematic?

4. During his visit to Gershon to explain his mistake in whistling the Nazi marching tune, the boy decides not to confide the fact that his father is Jewish. He thinks, “I’d let Gershon think the worst of me before I would claim any connection to him, or implicate myself in the fate that had beached him in this room. Why would I want to talk my way into his unlucky tribe?” [p. 23]. What does this episod—including his meeting with the headmaster—tell us about the narrator?

5. Very early on, the narrator tells us that the school adhered informally “to a system of honors that valued nothing you hadn’t done for yourself.” He goes on to say “Dean Makepeace had been a friend of Hemingway’s during World War I and was said to have served as the model for Jake’s fishing buddy Bill in The Sun Also Rises” [p. 4]. What seems here like casual exposition is seen later to be foreshadowing, linking the acts of deception committed by the boy and the headmaster. What other examples do you find of Wolff’s careful attention to the structure of the novel?

6. Having related his experience of Frost’s poem “After Apple-Picking,” the headmaster tells the boys, “Make no mistake . . . a true piece of writing is a dangerous thing. It can change your life” [p. 47]. Why is writing dangerous in this novel, and for whom?

7. Reading The Fountainhead, the narrator says, “I was discovering the force of my will. . . . I understood that nothing stood between me and my greatest desires—nothing between me and greatness itself—but the temptation to doubt my will and bow to counsels of moderation, expedience, and conventional morality, and shrink into the long, slow death of respectability” [p. 68]. Why does Ayn Rand’s writing have such a powerful effect on him, and why does his initial excitement fade upon actually meeting the author? The boy also learns an important lesson when he rereads the stories of Hemingway, whom Ayn Rand has attacked as a creator of “weak, defeated people” [p. 84]. What does he realize, and how is this lesson important for what happens later [pp. 95–99]?

8. As he looks toward graduation, the narrator says it was a “dream that produced the school, not merely English-envy but the yearning for a chivalric world apart from the din of scandal and cheap dispute, the hustles and schemes of modernity itself. As I recognized this dream I also sensed its futility, but so what? . . . With still a month to graduation I was already damp with nostalgia” [p. 134]. If literature plays a critical role in both the school’s chivalric ideal and in the nostalgia the narrator feels, is literature an alternate world in which the narrator would prefer to exist? What is ironic about the above passage?

9. Old School is in large part an examination of the process by which a boy tries to become the person he most desires to be. What does Wolff seem to suggest about the process of self-formation and the fragility of the ego?

10. What is most impressive about the story “Summer Dance” and why does it appeal to the boy so powerfully? Why in typing it does he feel “an intuition of gracious release” [p. 126]? Is this his moment of learning how to “begin to write truly” [p. 126]? Why is it important that he never considers his submission of the story—with slight changes—a deliberate act of plagiarism?

11. The competitors for literary awards are all indebted to other writers: “All of us owed someone, Hemingway or Cummings or Kerouac—or all of them, and more. We wouldn’t have admitted to it but the knowledge was surely there, because imitation was the only charge we never brought against the submissions we mocked so cruelly” [p. 14]. Can it sometimes be difficult to draw a line between healthy imitation and plagiarism? Is the school’s harsh response to the boy’s use of another writer’s story unfair?

12. Speaking of Old School in an interview, Tobias Wolff said, “For this novel to work, the reader has to believe in these boys becoming so madly passionate and competitive about this writing business. That can only happen when there is a complete failure of perspective, which requires a very enclosed world, like an army or a priesthood. Great mistakes can be made because the view becomes so narrow.” How does Wolff create this narrowed perspective? How do his choices of what to describe and what not to describe shape the reader’s perspective on the novel’s events? To what degree does the reader’s perspective merge with the narrator’s?

13. Tobias Wolff gives his readers an intimate view of his main character’s faults. How does your response to the boy change as the novel proceeds? What is the effect, particularly, of the last few chapters?

14. In his review of the novel, Chris Bohjalian noted, “Virtually every chapter in the novel could stand alone as a short story” (The Boston Globe, 4 Jan 2004, C7). Discuss Wolff’s attention to the dramatic tension and the formal structure of each chapter, and decide whether you agree with Bohjalian’s assessment that the novel is informed by Wolff’s experience as a master of the short story.

15. The novel’s epigraph, from a poem by Mark Strand, end with “the truth lies like nothing else and I love the truth.” How does the epigraph relate to the narrator’s confusion and his conflicts with himself?

16. How does the narrator’s meeting with Susan Friedman emphasize the difference between their characters and their approaches to the meaning and purposes of writing? Who is the more mature person? Each of them embodies certain ideals. What are they and what is their essential difference?

17. The book’s final chapter departs from the narrator’s story and moves to Mr. Ramsey’s story about Dean Makepeace, who had allowed himself to be thought of as a friend of Hemingway. How does this story work as a coda to the novel? What is the effect of the shift in perspective?

18. In what ways is humor expressed in this novel, and what kind of humor is it? What situations and descriptions are comical?

19. If you have read Tobias Wolff’s memoir This Boy’s Life, how would you compare it to Old School? What is the difference between memoir and fiction, and how does this question relate to the truth/lies dilemma presented by Old School?