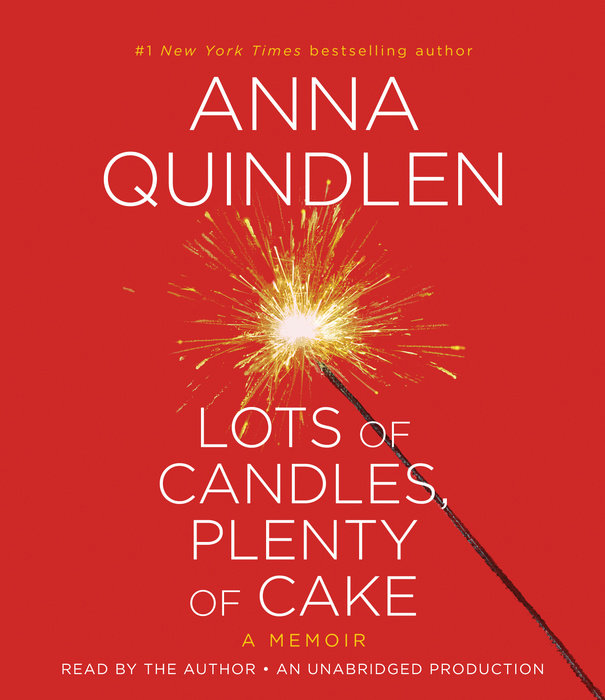 Lots of Candles, Plenty of Cake

1.      In the opening lines of the book, Anna Quindlen says about the arc of her life: “First I was who I was. Then I didn’t know who I was. Then I invented someone, and became her.” Looking back over your own life, do you identify with Quindlen’s experience? Do you think you’ve “invented” yourself as you’ve grown older, or become who you always were? And how would you differentiate between the two?

2.     Anna Quindlen loves everything about books—from the musty smell of old bookstores, to the excuse reading provides to be alone. Books, she writes, “make us feel as though we’re connected, as though the thoughts and feelings we believe are singular and sometimes nutty are shared by others, that we are all more alike than different.” What do you most love about books? Be specific: Is it the entertainment, the escape, the sense of connection? Something else entirely?

3.     Anna writes hilariously about the small white lies—the cost of a kitchen renovation, for example—that can keep a marriage healthy. Do you agree? If so, fess up: Which of your innocent fibs do you think has spared your relationship the most grief?

4.     Anna tells her children that “the single most important decision they will make…[is] who they will marry.” Do you agree? Why or why not?

5.     Anna calls girlfriends “the joists that hold up the house of our existence,” and believes that they become more and more important to us as we grow older. Have you found this to be true? If so, why do you think that’s the case? What do you think close girlfriends offer that a spouse cannot?

8.     “One of the amazing, and frightening things about growing older,” Anna writes, is that you become aware of “how many times it could have gone a different way, the mistakes that you averted, not because you were wise, perhaps, but because you were lucky.” Can you think of an example in your own life, of when you might have gone another way? How might things have been different? Are you grateful you ended up on the path you’re on?

9.     Anna writes about our attitude toward aging and our looks: “Women were once permitted a mourning period for their youthful faces; it was called middle age. Now we don’t even have that. Instead we have the science of embalming disguised as grooming.” How does she think that our society’s love of youth, and youthful looks, affect the way women lead their lives? Do you agree?

10.  At her age, Anna writes, she’s stopped trying to figure out why she does what she does. “I fear heights, love liver and onions, prefer big dogs over small ones, work best between the hours of ten and two. Who knows why? Who cares?” What are some of the quirks you’ve stopped fighting, the eccentricities you’ve come to embrace in yourself? In your friends, your family?

11.  “Those little stories we tell ourselves,” Anna writes, “make us what we are, and, too often, what we’re not. … I can’t cook. I’m not smart. I’m a bad driver. I’m no jock.” Anna recounts her own story of overcoming one of these “little stories,” and doing something she once thought impossible: a headstand. Do you have “little stories you tell yourself” about who you are, and what you can do? Are there times when you, or a friend or family member, have overcome one of these “mythic” obstacles and done something you thought impossible?

12.  Anna calls her body a “personality-delivery system.” She doesn’t require a “hood ornament”—what she really needs “are four tires and an engine.” Do you find this notion comforting? Or do you feel appearance is more important than that? Discuss.

13.  Anna draws some meaningful distinctions between parenting young children and parenting young adults. As she puts it, “It is one thing to tell a ten-year-old she cannot watch an R-rated movie; it is another to watch her, at age 30, preparing to marry a man you are not convinced will make her happy.” What do you think are some of the biggest challenges in parenting young and older children? Some of the greatest joys? What has parenting taught you about yourself?

14.  The “alchemy of parenthood” is watching “so much scut work”—dinners, sports, school, doctors’ offices—manifest itself in “unique and remarkable human beings.” Why do you think it’s so difficult to see the end product on the horizon—the “Sistine Chapel,” as Anna writes—during the day-to-day routines? Or, do you think there are moments within the daily routines when parents can catch glimpses of the larger thing they are helping to build?

15.  In the beginning of Part I, Anna’s daughter asks her what message she would give to her 22-year-old self. Anna has two answers: first, that her younger self should “stop listening to anyone who wanted to smack her down,” and second, that the bad news was that “she knew nothing, really, about anything that mattered. Nothing at all.” Did this advice ring true to you, too? If you were to give a message to your younger self, what would you say?