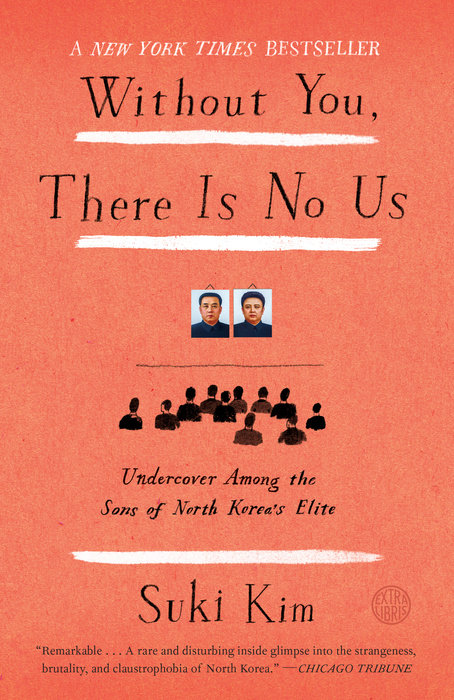 Without You, There Is No Us

1. Before reading Suki Kim’s memoir, what were your impressions about life in North Korea? By the end of the book, had your understanding changed? How does Suki’s account differ from others you may have read?

2. In Chapter 1, Suki writes that the “unrequited heartbreak” of her family’s separation during the Korean War prompted her to undertake repeated trips to North Korea. How does this background inform the narrative? Have you ever returned to your family’s country (or countries) of origin? How connected do you feel to the cultures of your ancestors?

3. In the prologue, Suki refers to PUST as a “prison disguised as a campus.” How does PUST’s isolation affect its culture? How do Suki and the other teachers deal with the monotony of life at PUST?

4. Suki carefully plans her lessons in order to expose her students to tidbits of information about life outside North Korea, especially technology and the Internet, without running afoul of the “counterparts.” If you were in Suki’s situation, what subjects or ideas would you want to teach?

5. On the trip to the apple farm, Suki is initially charmed by the idyllic rural landscape, but she is horrified to discover that the workers are stunted and emaciated. How do Suki’s encounters with North Koreans outside PUST affect the way she views her students? Were there any moments you found particularly striking?

6. In Chapter 20, Suki describes PUST’s “remarkably tight” buddy system. Though impressed by the boys’ devotion to each other, she is disturbed by how quickly these alliances can shift: “I noticed that with the shuffling of classes from summer to fall, most of the pairings changed as well, and students were never seen with their former buddies again.” What does this suggest about the nature of relationships in North Korea? Is true friendship possible under these circumstances?

7. Though Suki’s students are smart and hardworking, they struggle to write simple essays. Why do they find this task so difficult?

8. The curriculum at PUST was restricted not only by the government but by the religious values of the missionaries. How did these restrictions affect the quality of education? What did Suki achieve for the students by letting them watch Harry Potter?

10. Although Suki’s students were in their early twenties, and many had attended co-ed schools, they seemed to have had limited experience with dating. What do their beliefs about love reveal about gender and family in North Korea? What role does Suki’s relationship with “the man in Brooklyn” play in the narrative?

11. In Chapter 1, Suki writes: “Historians often refer to [the Korean War] as the ‘forgotten war,’ but no Korean considers it forgotten.” How does the war affect Suki’s life today? The lives of her students? Did it surprise you that North Korea considers the United States its “number one enemy”?

13. Suki’s students learn to condemn the United States and South Korea in their Juche training, yet they are eager to hear Suki discuss her life in New York. How do they reconcile Suki’s background with her role as an authority figure? Are there any points when their relationship frays?

14. In Chapter 13, Suki is deeply moved when her students crowd around her to take their class picture. She writes, “The teacher who took the photos told me that all the students wanted to stand close to their teachers. Being physically near them was the most they could do to show their love.” Were there other times in the book when strong feelings remained unspoken? Have you experienced something similar in your own life?

15. Suki’s students believe that the Korean language is superior and universal. Yet their government allows, even encourages, English-language instruction for its top students. How was Suki able to use language as a bridge? What did it mean to her students when she dared to speak Korean in their final days together?

16. Though Suki is unnerved by the ease with which her students lie to her, she eventually grows to love them. Why do you think this was the case? After reading the book, do you find the boys to be sympathetic?

17. Some in the West speculated that the death of Kim Jong-il would destabilize the North Korean dictatorship and might open the door to reunification. After reading Without You, There Is No Us, are you hopeful about North Korea’s future? Why or why not? What responsibility, if any, does the international community have to alleviate the suffering of the North Korean people?