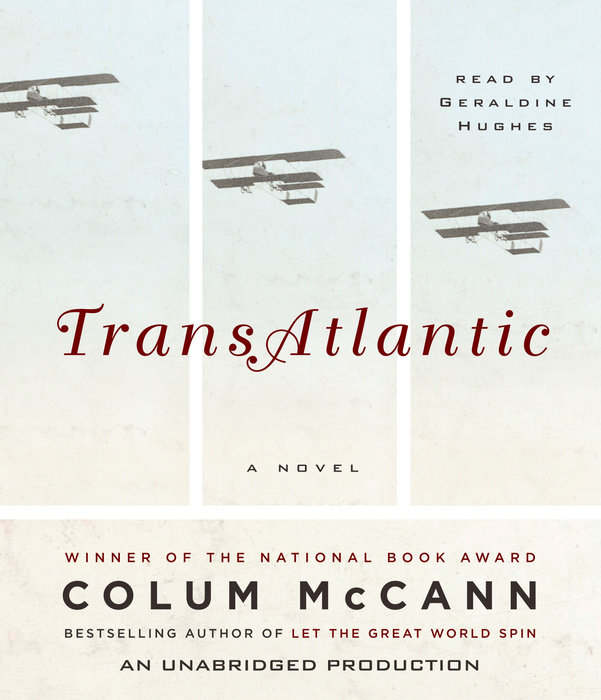 1. In this novel, Colum McCann writes about four men: Jack Alcock, Teddy Brown, Frederick Douglass, and Senator George Mitchell. Were you familiar with any or all of these figures before reading TransAtlantic? Did what you learn about them surprise you? Do you find their journeys thematically linked?

2. As Alcock and Brown fly across the Atlantic they have several close calls, including a moment when their plane spins out of control and a rough landing, all in the fierce cold and damp. Do you think anyone could, nowadays, make the same sort of journey they did? Why or why not? What sorts of physical challenges remain for adventurers and explorers?

3. Douglass forms relationships with several women in the novel: we see him write home to his wife, Anna, but he also indelibly shapes the maid Lily and becomes friends with Isabel Jennings. What do you think draws these very different people together? How do these small threads eventually create a tapestry?

4. Why do you think Lily follows Douglass to America? What does she hope to find there? Does this novel confront the impossibility of the American dream?

5. Book One is not chronological: after Alcock and Brown’s flight in 1919, we travel back to Douglass’s tour of Ireland in 1845, and then move forward once more to 1998 and Mitchell. How would your reading of the novel change if this section were differently arranged? What would happen to the novel if the sections concerning the women were woven directly into the stories of the men?

6. In the third section of the book, McCann takes us into the mind of Senator George Mitchell during the peace negotiations in Northern Ireland. What do you know about the Irish “Troubles”? How does Mitchell’s story enrich or change what you already knew?

7. The novel is structured so we meet the four men, seemingly unrelated, first—and then learn that women connected to all of them are multiple generations of one family. Why do you think McCann structures TransAtlantic in this way? What do the very male first half of the book and the very female second half tell us about men, women, and how we legislate history?

8. Lily loses most of the men she loves—the father of her first son, Tad; her sons, Tad, Adam, and Benjamin; and her husband, Jon. What do you think gives her the strength to continue on and become a successful merchant? Do you admire her? What does this say about the role of women in history?

9. In the course of TransAtlantic we see many technologies—to which we’re well accustomed today—at the moments they were still new, including airplanes, cameras, and automobiles. What does the novel tell us about these devices and how they bring people together (and tear people apart)?

10. There are two civil wars in the novel: the American Civil War, in which Lily loses her son, and the Troubles in Northern Ireland, which takes Lottie’s grandson, Hannah’s son. What does TransAtlantic show us about war? Who are its victims?

11. Why do you think Hannah leaves the letter behind with her hosts?

12. Some of the characters in the novel are based on real figures; others are entirely fictional. Is it easy to tell the two apart? How do these sets of characters illuminate one another? McCann has said in interviews that “the real is often imagined,” and “the imagined is often real.” What do you think he means by this?

14. As its title suggests, TransAtlantic is about Ireland and North America, and the ideas and people that cross between the two. What do you feel makes this international relationship special? What draws families and individuals back and forth between these countries?

15. What is the function of the Prologue of the novel, set in 2012? How does it frame the novel? How does it tie in with the last line of the book? What is McCann suggesting about the circularity of human experience?