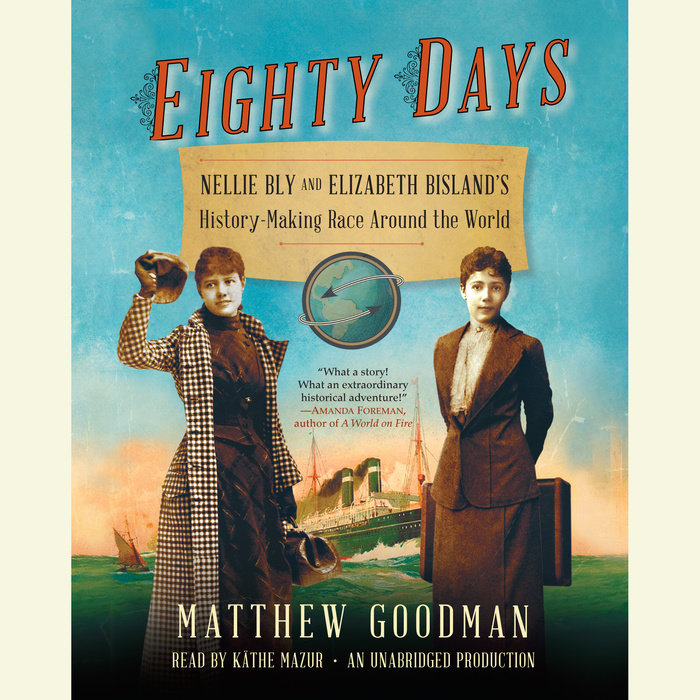 1. In the book’s prologue Matthew Goodman writes, “Nellie Bly and Elizabeth Bisland were not only racing around the world; they were also racing through the very heart of the Victorian age.” What do you think he meant by this? In what way did Bly and Bisland’s race illustrate some of the larger social issues of the time?

2. In what ways were Elizabeth and Nellie similar, and in what ways were they dissimilar? Did they have differing views of themselves as women, as writers, as Americans? How might this have colored their attitudes about the around-the-world race?

3. Almost every story of the time mentioned the fact that Nellie Bly carried only a single handbag for her trip around the world. How do you think you would pack for such a trip? What would you consider the essentials to bring along?

4. How might other female journalists of the time have viewed Bly and Bisland’s race around the world? Do you think they would have been supportive or critical?

5. Throughout the book Goodman intersperses the narrative of the race with discussions of historical issues—such as the hardships faced by women journalists, the power of the railroads, and the working conditions of stokers on the steamships. Why do you think he did this? Did you feel that this added to or detracted from the book as a whole?

7. How do you think that Nellie Bly’s difficult childhood might have helped to shape some of the choices she made as an adult?

8. Eighty Days is an example of the genre called “narrative history”—that is to say, a work of history that adopts some of the techniques generally associated with fiction writing. In what ways does this book read like a novel? How was Matthew Goodman able to accomplish this? Did you ever find yourself momentarily forgetting that it was a true story?

9. Visiting the Tanks of Aden in the moonlight, Elizabeth Bisland has a profound moment in which she comes to understand what the trip has given her: “the vividness of a new world, where one was for the first time, as Tennyson had written, Lord of the senses five, where the light of night and day had a new meaning, where years of indifference could fall away like a dried-up husk and every sense respond with the keenness of faculties newborn.” Have you ever had an experience like that while traveling? Which of the places described in the book would you most like to visit?

10. The very first story that Bly proposed to The World was to sail across the Atlantic in steerage, so that she could report firsthand on the conditions endured by the passengers there. Yet during her around-the-world race, when she had the opportunity, she did not write about steerage passengers. Why do you think this was? Do you think that she had changed as a journalist, and if so, in what ways?

11. Might Eighty Days be viewed as a kind of cautionary tale about celebrity? How so?

12. The book’s epilogue describes the very different lives led by Nellie Bly and Elizabeth Bisland in the decades after the race. Were you surprised by the way that things turned out for them? Why or why not? How would you answer the question posed about Nellie Bly at the end of the final chapter: “She had outraced Elizabeth Bisland; but now, looking back, it was not entirely clear which of them had won.”

13. The story told in Eighty Days took place more than 120 years ago. An around-the-world trip that once required two and a half months to complete could be accomplished today in a matter of days. Are there other ways in which society has changed far less dramatically since 1889?