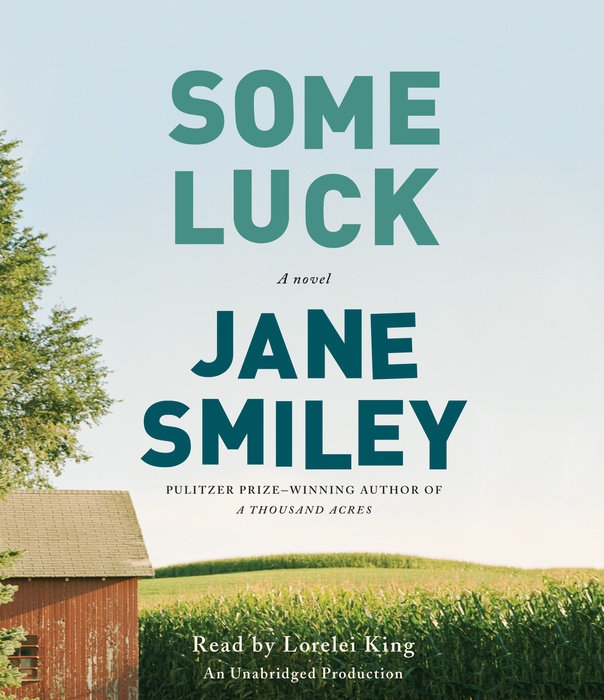 1. What do you think the title means? Whose luck does it refer to? Is it only good or bad luck, or does the word “luck” shift in connotation as the novel goes forward?

2. Each chapter in the novel takes place over the course of one year. How does Smiley use this structure to propel her story?

3. Rosanna assigns personality traits to each of her children in infancy. When those traits prove true, do you think it’s because of nurture—her and Walter’s influence—or nature—personalities fully formed at birth?

4. How does Smiley use the children’s points of view at all ages—including when they are very small—to show their development and coming-of-age in real time? What are some of the memorable traits that carry from infancy to young adulthood for each of the five children?

5. How does Mary Elizabeth’s death affect Rosanna? How does it change her relationship with the children who follow?

6. Throughout the story, Frank is described as persistent, if not outright stubborn. How does this quality help him in his life? Does it hinder him?

7. Variations on the story of Lucky Hans appear several times in the novel, including the version told by Opa to Frank in 1924, Lillian’s version remembered by Henry in 1947, and Arthur’s tale of Frank and the golden egg in 1952. What point is Smiley making by changing the mythology?

8. Over the course of the three decades depicted in Some Luck, various characters embrace or resist new technology—Walter and the tractor, Rosanna and electricity, Joey’s farming techniques, Frank’s study of German warfare. How does Smiley use their reactions to deepen our understanding of these characters and to show the passage of time?

9. On page 104, Eloise says to Frank, “Almost everyone sees things, but not everyone notices them.” What does she mean, and why is it fitting that she says this to Frank, of all her nephews and nieces? How does Frank exemplify the difference between seeing and noticing, especially as he uses his keen sense of “vision” to lead him throughout his life?

10.  What does Walter think and feel during the scene at the well? What do his decisions at that moment say about his own personality and the circumstances of the times? Why doesn’t he tell Rosanna about it until many years later?

11. What are examples of the different kinds of secrets that come in the novel—from those held by individuals to those of institutions, such as banks or the government? Do you have the sense that the book suggests a hierarchy of secrecy, or are all secrets equally dangerous?

12. How do you understand Andy’s identity crises and her other internal conflicts within the context of the novel? How do they reflect her relationship with Frank as well as the political and sociological forces at work during these beginning days of the Cold War?

13. What role do faith and religion play in the early parts of the novel? What about for the subsequent generation? Would you say that religion is related to the theme of luck?

14. Joey is distraught to learn of Jake’s death on page 229. Later, on page 373, he tells Lois, “I don’t get over things.” Is this why he’s so suited to farming? And does he, eventually, learn to get over things?

15. On Walter’s forty-seventh birthday, he lets each of his children select an item from a box he’d kept locked away. Joey chooses the sprig of lavender, Lillian the oriole feather, and Henry the gold coin; Claire was given the handkerchief; and Rosanna saves the photograph of Walter during the Great War for Frank. What do these totems represent?

16. Rosanna reflects on page 264, “Well, that’s what a war did for you—it made you look around at your shabby house and your modest family and give thanks for what you had and others had lost. . . . It made you stop talking about what you wished for, because, in the end, that might bring bad luck.” Frank was lucky and survived the war, but he’s far from unscathed when he returns home. Do his experiences verify or contradict Rosanna’s claim about the effects of war? How does what happened to him in Europe ripple throughout the rest of his life, as well as the lives of his family?

17. How do the generations of men engage differently in the wars of their times? What does their involvement show about their respective personalities, the nature of war, and America’s evolving role in world conflict?

18. How does parenting change from one generation to the next? Compare Lillian and Andy to Rosanna, and Arthur and Frank to Walter. And what about the roles of the sexes?

19. On page 392, Walter walks near the Osage-orange hedge: “Every year, Joe said, as Walter always had, that he was going to pull it up, but he never did—the roots had probably spread everywhere, and taking the thing out would be a major pain in the neck. There was always a reason not to bother. Walter touched one of the thorns. He was used to the hedge, but the thorns still seemed menacing.” What, if anything, do you think the Osage-orange hedge stands for, in the book as a whole? What metaphors are at work here?

20. By the end of Some Luck, Henry is just becoming an adult and Claire is still a child. What do you think might be ahead for them in the next book(s) of this trilogy?

21.  Did your knowledge that Some Luck is the first of a trilogy affect your reading of the novel? In what ways is the conclusion of the book definitive, full circle, and in what ways does it leave things open-ended?