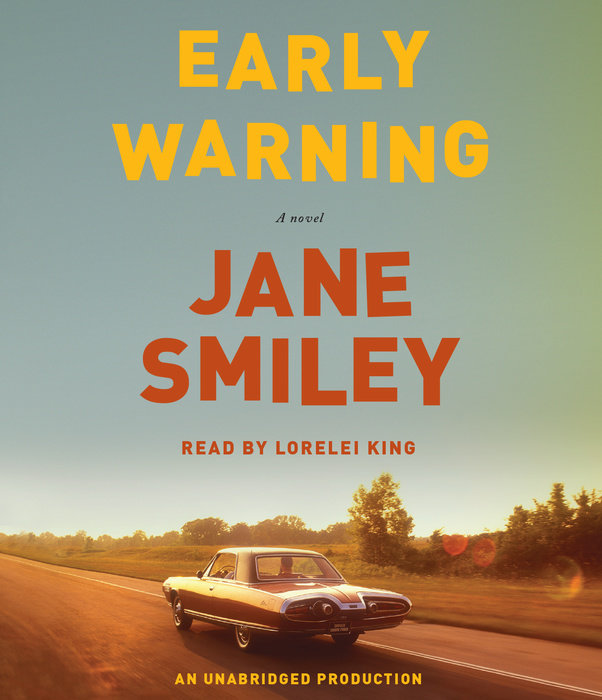 1. Early Warning is the second volume of The Last Hundred Years trilogy and builds upon the characters first introduced in volume one, Some Luck. Had you read Some Luck before starting this novel? If you did, how did you reorient yourself in the world of the Langdons? And if not, what was it like to meet the family for the first time here in 1953?

2. In Early Warning’s first scene, the family is gathered for the funeral of Walter, who died at the end of Some Luck. How does this reunion establish the dynamics among the present family members as well as bridge the gap between the two books? How is Walter’s presence felt throughout the scene and by each of his five children and his wife, Rosanna?

3. How is the secrecy behind Frank and Arthur’s relationship, personal and professional, conveyed throughout the novel? Do you think that either of them can ever fully know the other’s true motives or responsibilities, given their personalities and the political climate of this time period? Why or why not?

4. How does Smiley capture the tensions of the postwar era during the first half of the novel, politically and socially, in the United States and internationally?

5. Why does Andy have such misgivings toward her children and role as a mother? Does this aspect of her character change during the course of the book as Janet, Michael, and Richie grow up?

6. What are the different kinds of parenting portrayed in the book? How do parenting methods and attitudes change over time and between generations of mothers and fathers? What if anything struck you in particular about how this next generation of Langdons raises their children?

7. How does a farmer’s sense of responsibility, impending doom, and preparedness get passed on from generation to generation among the farmers in this novel? Does being cautious and expectant of the “many things [that] could go wrong” on a farm help the land in Denby, and those who are tilling it, flourish (37)?

8. Describe the bond between Henry and Claire. Besides their proximity in age, what about this set of siblings’ personalities and lifestyles makes them so close?

9. How do Andy’s therapy sessions reveal to the reader, and to her, certain parts of her past that she’s kept hidden? What do the various doctors and techniques she tries say about psychiatry and its parallel practices during the 1950s, including in the context of the more liberal ideas of sex during that time period?

10. How do the secrets and burdens of Arthur’s job manifest themselves in his decisions and relationship with his family, especially Lillian? In what ways does he embody the paranoia of the Cold War period? Are his fears even greater than the average American’s during this time?

11. Despite Janet’s antagonism toward her mother, what do she and Andy have in common? Do either of them acknowledge these overlaps in their dreams, fears, and ideas about motherhood? Do their attitudes toward one another change over the course of the novel?

13. Are the twins, Richie and Michael, more enemies or accomplices? How does the trouble they get into from the time they’re very young demonstrate their respective personalities and characters, as well as their complicated feelings for each other?

14. What do you think motivates Frank to betray his wife and hold himself at a distance from his family? What about Lydia Forêt makes her deserve being called the “love of his life”? What did you make of Andy’s reaction to discovering Frank’s infidelities?

15. What do you think the title of the book, Early Warning, means? How is it relevant to the events and general atmosphere of this novel and to what may be to come in the third volume of Smiley’s trilogy?

16. How does Rosanna, the matriarch of the Langdon family, stay connected to her children as they grow up in a new age while also holding fast to her values from the more distant past? How do those past values conflict with various developments in politics and other social changes in her present?

17. How does Smiley use Tim’s brief time in Vietnam to lend specificity to the way the war was fought, from the setting to the interactions among the men to their understanding of their goals there? In what ways does Lillian’s sense that “he would manifest again” after his death come true?

18. What are the differences between the military experiences of Tim, Michael, and Richie? How do these also compare with what you know from Some Luck, or heard retold in Early Warning, about Frank’s and Walter’s military service?

19. Describe the diaspora among the younger Langdons. What takes some of them away from Iowa and what makes others, like Joe and Jesse, stay? What events and emotions consistently bring them back together, and what does this say about the pull of home in general in a family?

20. What do Henry’s romantic interests—from his cousin Rosa to Basil and Philip—reveal about his character and the times in which he came of age?

21. How does Smiley juxtapose the older, more traditional values of a previous generation of characters, those in Some Luck with the changing cultural climate of the ’60s and ’70s at the end of Early Warning? Which of the characters emerge as supporters of a more liberal point of view, and which are more conservative? Were you surprised by any of the characters’ decisions or attitudes?

22. What true feelings does their trip to Paris arouse among the members of Frank’s family? Does Janet’s confrontation with Frank surprise you? Why might the level of trust and support among Frank, Andy, and Janet be especially complicated, even beyond the normal tensions among parents and children?

23. How does Janet embrace the revolutionary fervor of her time? What are some of the more personal reasons she has for joining certain protests and the Peoples Temple when she’s young, and how does her rebelliousness change once she is a wife and mother herself?

24. How is Frank’s buying out of the farm received by other members of the family, and why do you think he did this? Who do you think is the real inheritor of the farm? What might you guess is to come of the land based on this transaction and the kinds of crops, techniques, etc. being used by Jesse as he takes over from Joe, his father?

25. Why does Lillian keep the truth of her illness from her family for so long, and how have perceptions of cancer changed since she first discovered the lump in her breast? What does the tone of Lillian’s funeral suggest about her place in the family and how they’ll continue without her?

26. What is fitting about the way that Chance, Michael and Loretta’s son, is born? Does it suggest anything to you about the twins might behave as fathers in the future?

27. Who is Charlie, and why do you think Smiley introduces him into the story the way she does? Were you able to figure out his identity while reading? What does his presence add to the sense of mystery and secrecy that pervades the story in other ways?

28. How does the conclusion of Early Warning both tie up narrative threads woven throughout the book and introduce new potential conflicts and through-lines for the Langdons in the final volume of the trilogy? What do you expect will come next, and how does this degree of expectation compare to what you felt upon finishing Some Luck?