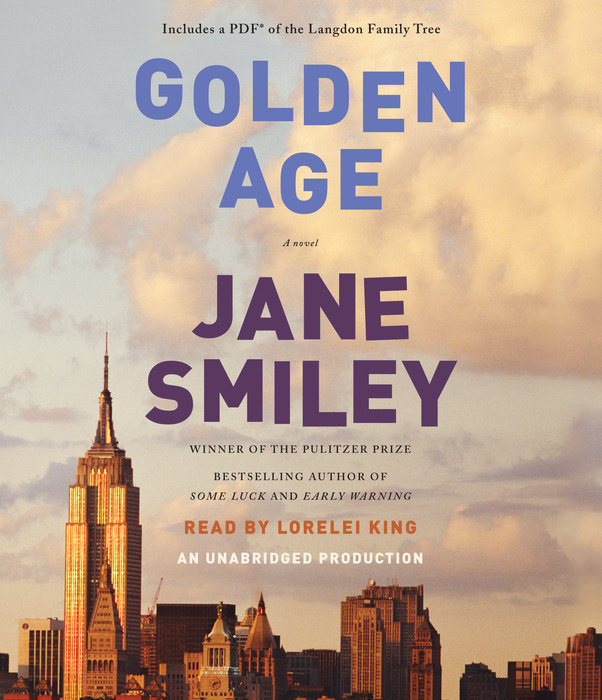 1. Had you read Some Luck or Early Warning, the first two books in this trilogy, before you read Golden Age? Either way, how does the book’s opening introduce you to the family, particularly Charlie Wickett, who is meeting the Langdon family for the first time after living his whole life without knowing them? How does his outsider’s perspective shed new light on characteristics of the other Langdons?

2. What is it about Michael and Richie Langdon’s shared genes and home environment that allow them to thrive in the risky financial and political worlds they enter as adults, despite their many differences in temperament and values?

3. In what ways does Jesse represent a new generation of farmer, especially compared to how his father, Joe, changed things from the way Joe’s own father, Walter, ran the farm in the early twentieth century? Do the new tools and technologies available to Jesse always help the farm and farmers, or not? How do the stakes of agriculture in the United States change during this novel’s timeframe (1987-2019)?

4. Does Riley, through her intense involvement in politics and environmentalism, and even in her home life with Charlie, represent a new role for women during this time in history? How far do the women in Golden Age, and in the trilogy as a whole, take the idea of being fully independent?

5. Discuss the changes in Frank and Andy’s marriage during this late stage of their lives. How have we seen them change not only as individuals but as a couple over the years? What about their ups and downs is unique to their relationship, and what is more universally true about the nature of a long-term marriage?

6. What draws Henry to “adopt” Charlie in the way that he does—intellectually and emotionally? How does each of them benefit and grow from this bond?

7. What do you think is behind Henry’s decision to officially adopt Alexis, Charlie’s daughter, later in the book? How do these two “children” affect the last years of his life?

8. How would you describe the different kinds of disasters that occur throughout the novel? What do each of the characters consider to be a disaster, and what is his or her reaction to it? What do these turning points in their lives and in the world reveal about their own priorities and values?

9. Were you surprised by Janet’s experience of motherhood while she was pregnant with Jonah? (If you’ve read the previous two books, how does this differ from her experience with Emily and from Andy’s mothering of Janet, Michael, and Richie?)

10. In what ways does it make sense that Richie fits so well into the political machine of the United States Congress, and in what other ways is it surprising? How does he use, consciously and unconsciously, his personality and ambitions to get ahead? How are his means of being successful different from Michael’s?

11. Frank describes Arthur as “a genius at keeping secrets, but he could not tell a lie” (90). What is the difference between keeping secrets and lying for the two men, and how do Arthur’s final years illustrate the burdens he had to bear from the secrets he had to keep? Are there other characters for whom this difference ultimately applies, in the context of professional or private life?

12. How do the (often heated) political discussions among Richie, Ivy, Michael, and Loretta reflect changing attitudes among civilians toward the government post-Vietnam, and how do they compare with the secrecy and paranoia that seemed to prevail during Frank and Arthur’s era? How is their understanding of and involvement in politics different from their parents’ and grandparents’ generations?

13. What, if anything, is telling about how each of the Langdon siblings dies in this novel? How do they evaluate their contributions to the world as they grow older, and how does the way that others remember them reflect this? Discuss what Jesse says after Frank is buried in the family plot—“in death he wasn’t too good for them” (120)—and what you thought about how Frank died in particular.

14. How do memories alter, or introduce new events and details from the Langdons’ past into the book? Did anything that’s revealed in Golden Age (for example, Andy’s memories of Frank), change how you saw or remembered these characters from the previous books in the trilogy, or change your impression of them in Golden Age itself? What does this say about the nature of memory?

15. Discuss the different ways that love manifests throughout the novel. How does each of the characters define and express it over the course of his or her life? Is love always a positive force, or can it be more complex? Discuss the meaning of Andy’s eulogy for Arthur, in which she says, “Arthur’s great tragedy was that he knew what love was better than anyone else in the world, and he could feel it wavering and swelling or dissipating and flowing away as no one else could” (210)?

16. What kind of espionage is required for Tina to create her art exhibit, which prominently features her extended family? How does the way she superimposes images of various characters distill the way you may read and make connections between them in the book?

17. How do Charlie and Guthrie’s experiences complicate the legacy of Langdon men in wars? What does it mean that Frank’s letters get passed down through Jesse (Frank’s nephew) to Guthrie? How is the kind of war Frank wrote about different from the conflicts this generation of Langdons encounter in the America of today?

18. Did Guthrie’s experiences in Iraq make you change any opinions you had about the war and the United States’ involvement in Iraq generally? How does the novel depict the varying attitudes toward the war, including Richie’s as a politician?

19. How does Smiley use Michael’s scheme involving Andy’s money, and the foreclosure of the farm, to make personal the large-scale financial scandals of the early 2000s? What is the effect of her so doing on your understanding of, or feelings about,these events?

20. Are the relationships among the women in the book different from those of the men, and if so, how? What might that say about the times as well as the way the future generation of Langdons might differ from previous generations, for whom secrecy and fear were prevalent?

21. Did you feel that Golden Age takes a particular stance on contemporary politics, or are the book’s politics balanced? Does the strong divide between Democrats and Republicans also divide the Langdons in a lasting and significant way, or not? How do the personal and the political overlap in this novel, and how does this affect the narrative and your engagement with it?

22. What/who is the fox that Andy sees throughout the book? How did you interpret its meaning at the end of the novel?

23. How do you think Felicity will contend with the changes to the family’s farm—the literal wearing away of the soil? What do these changes say about not only climate change but any family’s “rootedness” in the mid twenty-first century?

24. Are there characters whom you would describe as heroes or villains in Golden Age? How and why do these definitions apply or change throughout the trilogy as a whole?

25. Would you describe our times as a golden age, along the lines of the discussion between Janet and Claire on p. 426? Why or why not? Does the scope of history shown in the trilogy suggest that one was more or less golden in America and the world than another, and for what characters is that most relevant?

26. How much about Smiley’s projected future seems realistic to you? What do you imagine the challenges were in Smiley’s taking events in the novel past the times she has seen and lived?

27. If you have read Some Luck and Early Warning, what was your reaction to the trilogy’s ending, after having lived with the Langdon characters for one hundred years? Who among them did you relate to most, find most interesting, or have other, more complicated feelings toward? Did your initial favorites shift or change? How did your relationship to them compare with any other characters from novels with a similarly sweeping historical scope and depth?

28. How do you think the experience reading these three books individually might compare to reading them in a single volume, if they were to be published that way? Could you appreciate any single novel on its own terms, or do you think of them as a fixed set?