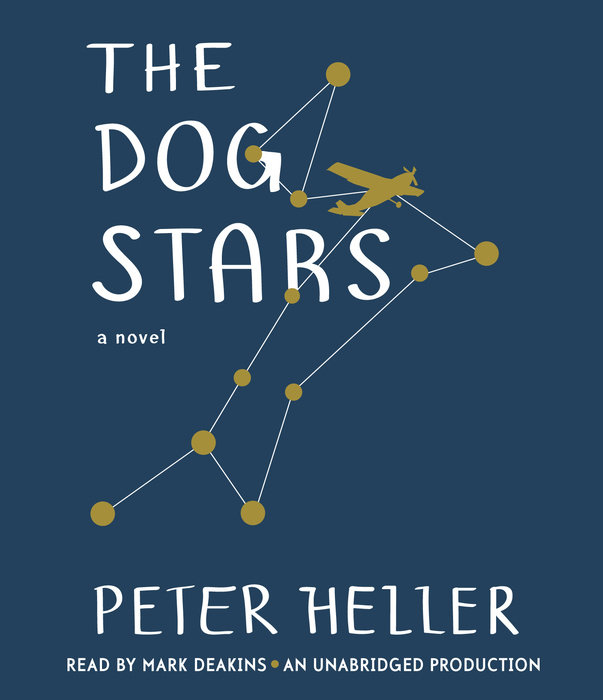 The prose style of The Dog Stars is clipped, terse, often fragmented. Why would Heller choose this way of writing this particular story? In what ways is it fitting?

2. At the beginning of Chapter III, the narrator wonders why he’s telling this story. What might be his motivations? Who does he imagine his audience will be?

3. Hig says that Bangley “had been waiting for the End all his life. . . . He didn’t do anything that wasn’t aimed at surviving” [p. 71]. He also clearly enjoys killing people. In what ways is Hig different from Bangley? How did “the End” affect him? How does he feel about killing?

4. How and why does Hig’s relationship with Bangley change over the course of the novel?

5. Jasper’s death is a turning point for Hig. How and why does it affect him so powerfully?

6. When Cima’s father asks Hig why he came to their canyon—why he flew beyond the point of no return—Hig can’t find an answer. What might have prompted Hig to take that risk? What was he looking for?

7. When they decide to take a ewe and a ram with them on the plane, Hig says, “Like the Ark. Here we go” [p. 273]. He says it jokingly, but does the novel offer a sense of hope that life on the planet might continue, postapocalypse? What other biblical references occur in the novel?

8. The Dog Stars is a serious book about a devastating subject, but what are some of its more lighthearted moments? Why is it important that the book have this mixture of tenderness and violence, anxiety and peace?

9. What has caused the end of human civilization in the novel? Why have the scattered survivors become so savage? Does the postapocalyptic world Heller presents seem accurate and likely, given the state of the world today?

10. Why is Hig’s relationship with Cima so important in the novel? What makes it particularly touching, given what each of them has suffered?

11. The novel’s ending is ambiguous. Cima, Hig, Bangley, and Pops have formed a kind of family, the spruce and aspen are coming back, eagles and hawks are flourishing, but the trout and elk are gone, water is disappearing, and mysterious jets are flying overhead. What might happen next, or in the next ten years, for these characters and the world they live in?

12. Why does Heller conclude The Dog Stars with Hig’s favorite poem “When Will I Be Home?” by Li Shang-Yin? Why is this a fitting way to end the story? In what ways is the novel about the longing for home?

13. What does the novel imply about human nature, after the constraints of civilization have been removed? What does it suggest about the possible consequences of the way we are living now?

What similarities does The Dog Stars share with other recent dystopian novels like The Hunger Games and The Road?  In what important ways does it differ from them?