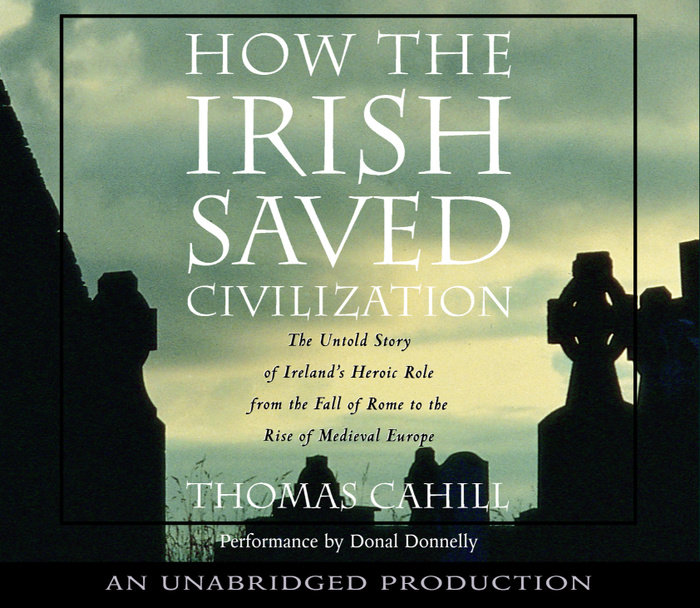 How the Irish Saved Civilization

1. As the author notes, most historians describe periods of stasis, not movement, so that we miss out on the transition periods of history. Discuss this in light of the story the author tells in this book.

2. The author often gives us tableaus where he slips deep into the scene as it's happening--the Roman soldiers facing the German tribes along the banks of the frozen Rhine, for instance. Talk about how he does this and how it depends on our understanding of the history he reports.

3. The possibility of "psychological fiction" [p. 41] came about because of Augustine's Confessions. Discuss this breakthrough to the personal in prose.

4. The author gives a picture of Irish character that spans prehistoric to current times. Discuss character as a trait rooted in or heavily influenced by geography, weather, and culture.

5. Ireland, an island, had fewer outside influences on it than did many other cultures during the Pax Romana. Discuss isolation as a protective force, and a contributor to the idea that as Roman lands went from "peace to chaos," Ireland went from "chaos to peace" [p. 124].

6. Talk about the particular Irish women presented in this book--Medb, Derdriu, Brigid of Kildare, and Dark Eileen O'Connell--and the general Irish view of the role of women.

7. Discuss the difference between Patrick and Augustine's "emotional grasp of Christian truth" [p. 115].

8. Talk about the Irish people's ability to enjoy magic and superstition and pagan influences and yet convert wholeheartedly to Christianity.

10. As Columcille and Columbanus traveled in Europe and converted people to Christianity and established monasteries, they worked under the rubric of a democratic principle that "a man is better than his descent" [p. 176]. Discuss this as a change in previous and subsequent spiritualities, such as that of Augustine and the Rule of Saint Benedict.

11. Is power always corrupt? Discuss this in light of the Church conspiring with the enemy (Brunhilda) against its own messenger, Columbanus, and his Irish monks.

12. Discuss the cause and effect of the clash between the Roman Christianity of Augustine's Canterbury and Celtic Christianity at the Synod of Whitby in A.D. 644.

13. Discuss how the intellectual Greek approach to thought died and the price that subsequent cultures paid for it at the Synod of Whitby or elsewhere.

14. Discuss De Divisione Naturae, John Scotus Eriugena's theory of nature and reality, and Pope Honorius III's order to burn all copies of it. From what the author presents here, talk about the difference between pantheism and what Scotus suggested.

For Discussion: The Hinges of History Series

1. Each book gives a piece that helps complete the picture of who we are, of our history, of our humanity and acts as a piece in a puzzle. How effective is this type of a reckoning of our past?

2. The author did not write the books in his series in strict chronological order. Instead he traces large cultural movements over many centuries. How does this choice affect the understanding of each book as a piece in the puzzle? Or as an individual work?

3. In his books, the author gets inside the heads and hearts of his subjects, using a very close third-person point of view. How does this choice strengthen his premise? Does it have limitations?

4. The author is Roman Catholic. Is he able to present these histories without being biased by his Catholicism? Does one's religion (or lack of it) necessarily constrict or color one's view?

5. Discuss the nature and history of the Irish and the Jews as read in these books. What are their ambitions, their differences? How do they differ from the Romans and the Greeks in all three books?