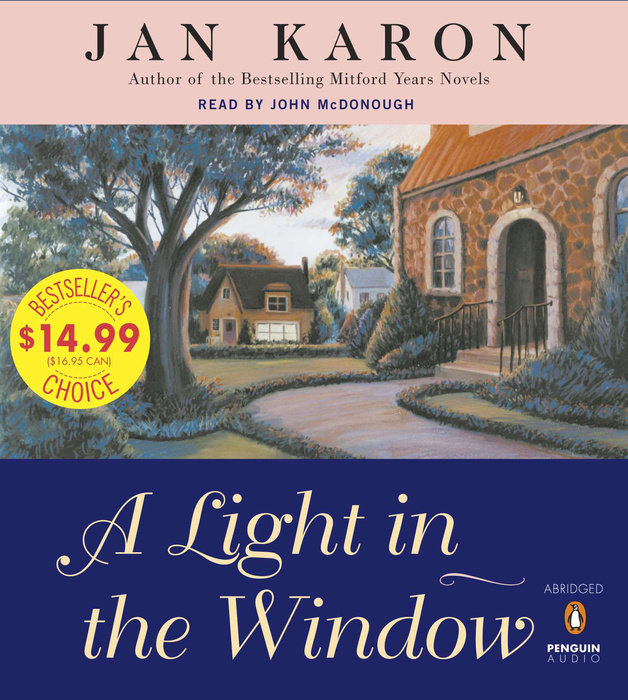 A Light in the Window

Come away to Mitford, the small town that takes care of its own. Nestled in the Blue Ridge Mountains, Mitford is a crazy quilt of saints and sinners — lovable eccentrics all. Seen through the eyes of Father Tim, the long-suffering Village Rector, Mitford abounds in both mysteries and miracles, compelling readers to return again and again to this beloved series.

In the tradition of James Herriot, Bailey White, and Garrison Keillor, author Jan Karon brilliantly captures the foibles and delights of a hilarious cast of characters.

Book II: In A Light in the Window, Father Tim is in love and running scared. Cynthia has won his heart, but he is set in his ways and afraid of letting go. To complicate things, a wealthy and powerful widow pursues Father Tim, plying him with crab cobbler and old sherry. In the ensuing comedy of errors, he just can't set his foot right. Somehow the antidote to this confusion rests in the history of his oldest and dearest parishioner, Miss Sadie, and the discovery of family she didn't know she had.

Jan Karon was born in Lenoir, North Carolina, in 1937 ("A great year for the Packard automobile," she says). Her creative skills first came alive when her family moved to a farm. "On the farm there is time to muse and dream," she says. "I am endlessly grateful I was reared in the country. As a young girl I couldn't wait to get off that farm, to go to Hollywood or New York. But living in those confined, bucolic circumstances was one of the best things that ever happened to me."

Jan knew that she wanted to be a writer, and even wrote a novel at the age of ten. Her first real opportunity as a writer came at age eighteen when she took a job as a receptionist at an ad agency. She kept leaving her writing on her boss's desk until he noticed her ability. Soon she was launched on a forty-year career in advertising. She won assignments in New York and San Francisco, numerous awards, and finally an executive position with a national agency.

Recently she left advertising to write books, and moved to Blowing Rock, North Carolina, a tiny town of 1,800 perched at 5,000 feet in the Blue Ridge mountains. "I immediately responded to the culture of village life," says Jan. "And I must say the people welcomed me. I have never felt so at home."

Blowing Rock is the model for Mitford, and the similarities are strong. "None of the people in Mitford are actually based upon anyone in Blowing Rock," says Jan. "Yet, the spirit of my characters is found throughout this real-life village. You can walk into Sonny's Grill in Blowing Rock and find the same kind of guys who hang around Mitford's Main Street Grill."

Jan is quick to assert that there are Mitfords all over the country, those hundreds of towns where readers of Jan's books cherish their own cast of eccentric and beloved characters. Currently, one of Jan's chief delights is getting to meet those readers. "Some people finish writing and open a bottle of scotch or a box of chocolates," she says. "My reward is meeting my readers face-to-face. I think an author is something like a glorified bartender. My readers tell me all kinds of things about their lives, and I get these long, long letters. I answer every one, of course."

Jan has a daughter, Candace Freeland, who is a photojournalist and musician.

A CONVERSATION WITH JAN KARON

You write about the small town of Mitford, yet haven't you spent most of your life in cities?

Until I was twelve I lived in the country, then I spent many years in cities. I think that I was born with a kind of deep affinity for the rural, the rustic. In addition, I'm very drawn to the pastoral novels of the English genre — the village novel where a small group is used to paint a picture of a larger society.

I still have in me a great love for the agrarian — for what this country was, for what we still are. People say, "Oh well, I guess there's no such thing as Mitford." Well, the good news is there are Mitfords all over the country, and there are still great stretches of open land and pastures and meadows and fields. It's not all bad news. There's so much left of this country that is reasonable and moral and strong. And that's the part I relate to.

You've often said how important a rural upbringing was for you. How has it influenced your writing?

On the farm there were long passages of time in which to observe. The senses are very important to me, and I try to bring the experience of the senses into my writing. And life on the farm is very graphic. Calves are dropped, colts are foaled, manure lies steaming in the sun. It's the bottom line of what life is about.

Mitford is packed with delightful characters like Dooley, Miss Rose, Emma, Miss Sadie, and Homeless Hobbes. Where do they all come from?

Darned if I know. My characters walk in and introduce themselves to me and I'm stuck with them. When I first moved to Blowing Rock to write a book, I struggled hard to write according to the outline I came here with, but the book never worked. The characters never got off the page. That was a real defeat for me. "Woman's dream turns to nightmare," I thought. "I don't know how to write a book!"

Then one night in my mind's eye I saw an Episcopal priest walking down the street. I decided to follow him and see where he went. Well, he went to a dog named Barnabas, they went to a boy named Dooley, and the story unfolded before me. Instead of me driving the story, the story began to drive me! I got interested, wrote a couple of chapters, and there you have it.

How much do you personally relate to Father Tim? Are you very much like him?

Father Tim's personality is far more conservative than mine, but like Father Tim, I don't know a great deal about having fun. If I get dragged into it, I can always enjoy it, but it's hard for me to go out and find it on my own. And of course we both share a faith. My books are formed on my connection to God. That's the seasoning in the stew.

How would you describe the nature of that faith?

In my books I try to depict not a glorious faith with celestial fireworks, but a daily faith, a routine faith, a seven-days-a-week faith. Father Tim's faith is part of his everyday life. He has simple prayers, not polished, pious prayers. He follows the Apostle Paul's command that we pray without ceasing. I try to depict how our faith may be woven into our daily life, like brandy poured into coffee. I believe that spirituality needs to be basic, common, everyday.

Father Tim seems in the thick of things whether he wants to be or not. How does this affect him?

In the first book, At Home in Mitford, he lived a very quiet life. In the subsequent books we are able to see far more of Father Tim's humanity because he is surrounded by people. That means that his heart is going to be broken and his patience is going to be stretched — all of the things that happen when we get involved with other people. This has made him a much more human figure.

Father Tim is very heroic but he does grand things in such a quiet way that he doesn't assume the proportions of a hero. I think Father Tim is somebody who's into recycling and restoring people. It comes from two places inside of him. First of all, it comes from that place where he was so deeply wounded in his relationship with his father. He is in a sense recycling himself; he's still trying to heal himself. And second, he operates on the fuel, the steam that comes from his relationship with Jesus Christ. But he's definitely into reclamation, recycling, helping people find the way — which is what Jesus is all about. So I suppose that Father Tim is a type of Christ figure — not just because he is a preacher but because of the way he is constructed.

In Out to Canaan, Father Tim lives in a chaotic household. Did you grow up in such a household?

No, I didn't. I've lived a fairly ordered life. Being a writer requires a lot of solitude. I've not lived like that, but I've always looked toward those households with a certain longing.

Where do you write?

My studio stretches across the back of my little house. It has eight windows that look out on a copse of trees. I can see the blue outline of the mountains in the distance. Where I write is exceedingly important to me. I am never comfortable unless I am in a room that pleases me. I need the pictures on the wall to be hanging straight. I have to do my housekeeping before I can sit down at the computer. Things need to be in order in my mind and in the place where I write. In recent months my life has been topsy-turvy. I have learned to write with utter chaos all around me. I turn to my book with great intensity. Sometimes I may write twelve hours a day. Sometimes I can write only two hours a day.

Do you have any conscious technique that so effectively makes Mitford come alive for people?

I grew up in the era of radio. When you turned on the radio, you heard the voices and you filled in all the blanks. Radio helped me become a writer. Television would never help me become a writer. With radio you have to color in everything. What you need to do for readers is give them as much free rein as they can take. Let them participate in the story by building their own imagery.

So conversations and characters bear the burden of telling the story?

You seem to have a lot of lovable eccentrics in your books. Are you attracted to unusual people?

I see everyone as unusual. Most everyone seems to have an extraordinary life story. "I just love people," was my grandmother's saying. Casting the writer's light on ordinary people makes them appear extraordinary.