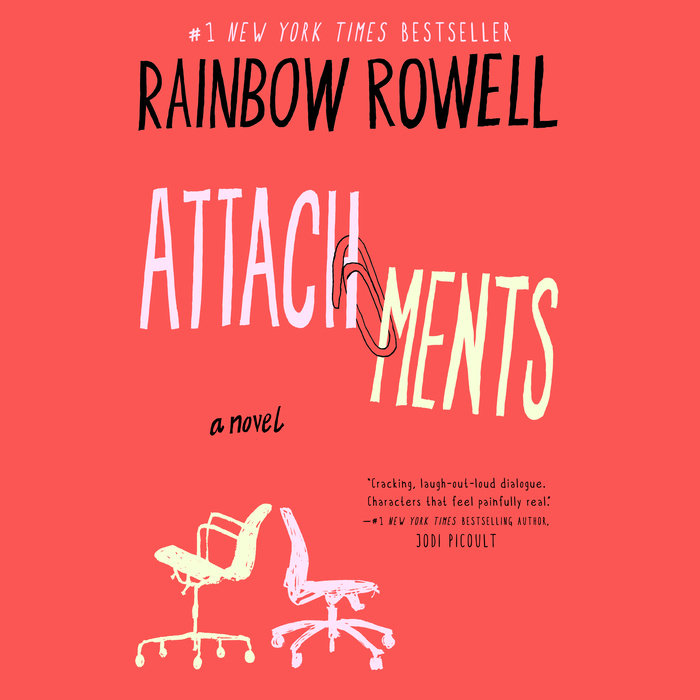 After moving back home to Nebraska following college, Lincoln isn’t exactly sure what he wants or who he is. He lives with his mother, he maintains an adequate social life among his role–playing friends, and he is amassing a decent income at his late night job vetting potentially unprofessional emails at The Courier. Apart from the occasional twinge of guilt reading others’ correspondence, Lincoln has achieved a somewhat contented stasis.

However, Lincoln gets hooked on reading the email exchanges between Features copy editor Jennifer Scribner–Snyder andThe Courier’s resident movie critic Beth Fremont. He begins to look forward to their banter and, after awhile, he realizes that he’s falling for Beth, a woman he has never laid eyes on. How can he possibly be in love with someone he’s never actually met, and, maybe more importantly, what would she do if she ever found out he has been reading her email every night for months?

Attachments is a story of two 20–somethings caught in the crisis of adulthood at the end of the millennium. It is tale about finding oneself and moving on. It is a novel about falling in love with the essence of a person rather than the surface.

Rainbow Rowell is a columnist for the Omaha World-Herald. She lives in Nebraska with her family.

A CONVERSATION WITH RAINBOW ROWELL

Q. Attachments includes many references to pop culture, specifically circa the mid to late 1990’s. What is your relationship with pop culture? How does it inform your writing? From which corners of pop culture do you draw the most inspiration?

I’ve always been fascinated by pop culture . . . When I was a kid I would read books about the Beatles and the Monkees and pore over old Life magazines. Now I write a pop culture column for our city’s newspaper, The Omaha World–Herald.

As a writer, I use pop culture references almost as shorthand. Pop culture is shared culture, so if I say that someone is more of a Star Wars geek than a Star Trek geek, you probably know what I mean. If I say that someone prefers John Lennon to Paul McCartney, or Jacob to Edward, or Batman to Superman . . . You get it.

The trick in Attachments was finding nineties references that would still have meaning today. If I mentioned a song (“Who Let the Dogs Out?”) or an actor (Julia Roberts, John Wayne) or a movie (The Matrix), it had to be something that readers would probably still recognize and understand.

Some writers don’t like to use pop culture references in books or movies because they date a story. But I’ve never minded that. I like to experience a story in context.

A few of my favorite artists are really good at this - using pop culture references to help tell a story. I think of Nick Hornby (High Fidelity) and Matthew Weiner, the creator of Mad Men.

Q. So much of the book consists of the email repartee between Beth and Jennifer. How did you go about crafting these exchanges? What was most important to you in creating the specific voices of these characters?

Well, it started as a cheat for me. This is my first novel, and I was really anxious about writing the third–person narrative. The descriptive parts. But I was much more confident about writing dialogue, and email is really just dialogue . . .

So I wrote all of the Beth/Jennifer scenes in first. I wanted their friendship to be a major part of the book - and I wanted to write about how female friendships have moved from the telephone to the computer. In a way, email feels even more intimate than the telephone because you don’t even have to say anything out loud.

I knew that it could get confusing, the switching back and forth between their two voices, so I tried to make them pretty distinct. Jennifer writes more formally than Beth does; she’s a copy editor, so she’s less likely to use sentence fragments or end a sentence with a preposition. She makes fewer pop culture references, and the ones she does make are less hip or current than Beth’s.

Beth is more self confident, and - in part because of her job - more laid–back. If I thought of a silly joke, I’d give it to Beth. If the joke was sharp or bitter, I’d give it to Jennifer.

Also, Beth is really amused by Jennifer, so I tried to make her sound fond and smiling.

Q. What role does this novel’s setting play in your writing of it? How much of Nebraska and the Midwest do you see in this book and how would a different setting have changed the story and characters?

Well, I wanted to set the book in Omaha because people in Omaha almost never get to see our hometown in books or TV or movies - and we get so excited when it happens.

But I didn’t want the location to be a distraction for other readers. (Almost all of the places I mention in Attachments are real Omaha places, but I never actually say “Omaha” anywhere in the book.)

I do think of the characters as very Midwestern . . . The way that Doris talks to everybody who comes into the break room and learns their names. The way that everyone is always offering each other food. The car culture. The gorgeous cheap apartments. The Lutherans.

Q. The characters in this book deal with significant loss and loneliness, but find powerful moments of love as well. What themes or topics do you want your readers to walk away with? For you, which character best speaks to the message of the novel and why?

Attachments is about three people who are all at that age - late 20s, early 30s - where you realize you’re not a kid anymore. You’re an adult. And you can’t just let your life keep happening to you. You have to take the reins, now, or risk never having any of the things you really want in life, whether it’s love or a family or the right job .

But you also realize at that age how little control you really have.

Life isn’t like the movies. Things don’t just fall into place because your favorite song is on the soundtrack or because it’s New Year’s Eve.

Lincoln is the heart of the book for me. He’s the character most in danger of sleeping through life. He has a lot to offer, but he’s been so passive for so long that you really think he might not ever stand up for himself.

Secondarily . I knew when I started the book that I wanted Lincoln to be a truly good guy. I didn’t want him to be the guy in the romantic comedy who starts out rude and sexist and is then transformed by true love into a good guy. I reject that entire idea. Bad guys don’t turn into good guys. If you want a good guy, you need to find one who’s already good.

I wanted Lincoln to be like the guys in my life - sensitive, kind, idealistic, feminist, smart. I wanted to show that a guy like that can be a dreamy romantic hero.

Q. What are you working on next? Can we expect more from Lincoln and Beth?

I don’t think I’ll write anymore about Lincoln and Beth (though I have been posting deleted scenes from the novel on my website, rainbowrowell.com). Those characters seem like they’re in a good place to me.

I wanted to write about how tragic every high school romance is. At 16, you’re old enough to fall in love - perhaps more powerfully than you ever will again - but you’re not old enough to do anything about it. Your life isn’t your own yet. In a way, every 16–year–old in love is Romeo or Juliet.

My goal was to write a story about first love that would actually make you feel 16 again while you were reading it. I wanted it to be visceral . . .

After Attachments, it was fun to write a book where the main characters actually meet and have scenes together.