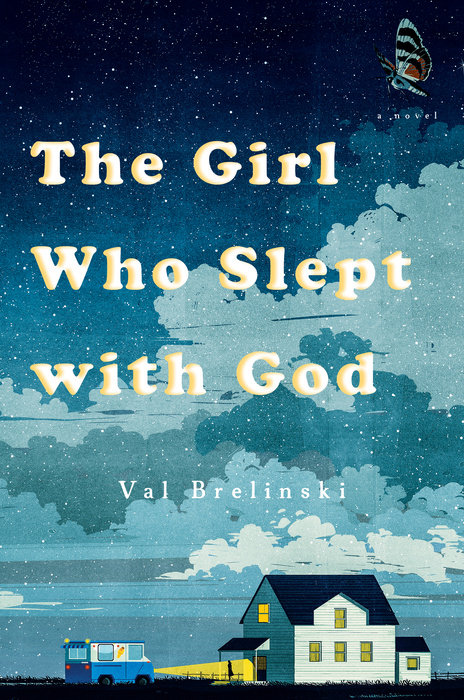 The Girl Who Slept with God

2. Would you say that the Quanbecks had a happy family life before the summer of 1970?

3. If Grace hadn’t become pregnant, how do you imagine Esther and Oren would have handled Jory’s budding sexuality?

4. Do you think that Esther and Oren ever considered the possibility that Grace was telling the truth about her pregnancy? Would you?

5. Midway through the novel, Jory lies about starting her first menstrual cycle. Later, it actually does begin. What is the significance of these two incidents?

6. Jory comes to rely upon Mrs. Kleinfelter, who helps the two sisters and becomes like a grandmother to them. Does Mrs. Kleinfelter also benefit from helping Jory and Grace?

7. How did your opinion of Grip change over the course of the novel? Is he a predator?

8. At the beginning of The Girl Who Slept with God, Jory often feels overshadowed by her older sister’s inflexible and unwavering piety. Grace, in turn, seems almost to ignore Jory. How does the relationship between the two sisters evolve over the course of the novel? Is their dynamic largely a result of birth order or of Jory’s and Grace’s respective religious beliefs?


Spoiler Warning: Don’t Read Further if You Don’t Want to Know What Happens

9. If Jory had met Laird before Grip, might some of the novel’s later tragedies been averted? Or would Grip have displaced the teenager in Jory’s romantic imagination?

10. Would Grip have initiated a sexual relationship with Jory if Grace hadn’t entered the picture? At seventeen, was Grace old enough to become involved with Grip?

11. Does knowing that she’d been raped cause Grace to lose her faith in God? Or did the knowledge simply force her to accept the possibility that her beliefs weren’t, after all, absolute?

12. Might Grace have been happy with Grip if they had succeeded in escaping together? What are the similarities and differences between Grace and Anneliese, the pregnant hippie at Hope House?

13. Was Esther’s breakdown and separation from Oren inevitable? Will her decision to move to Los Angeles ultimately shield Frances from the worst of the fallout?

14. What would happen to Oren if Jory chose to live with Mrs. Kleinfelter? If you were Jory, could you forgive Oren for the decisions he made?

15. At the end of the novel, Grip blames Oren for what happened to Grace, whereas Jory blames herself for betraying them to her father, and Oren believes it was Grace’s own inflexibility that led her to kill herself. Was any one person culpable for what happened?

16. Are some wounds too deep to heal? What do you think will happen to Jory and Oren?