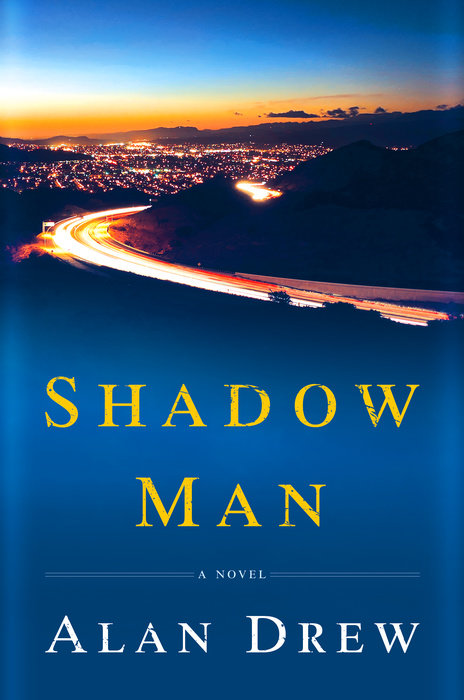 1. Through the serial killer’s need to create his own language, we are introduced to the dilemma of one’s need for a voice. Did any of the characters gain his or her voice over the course of the narrative? How did voicelessness affect some of the characters and their relationships?

2. How does water/swimming figure in Ben’s life? (Discuss what water represents in regard to solace, safety, and powerlessness.)

3. What does Shadow Man’s setting lend to the plot? Or, how does the setting affect the plot? What senses are stirred in descriptions of the setting, and how is suspense built?

4. How does the author’s narrative strategy of revealing the serial killer’s thoughts affect your perception of the killer?

6. Shadow Man engages many tropes of the thriller genre, while also pushing into literary fiction territory. Do you think this book is or is not a thriller? In what ways does it adhere to the tropes found in typical thrillers and in what ways might it diverge from and/or comment on the genre?

7. This book explores various forms of fear, particularly communal and private fear. Talk about how fear is used as a tool of terror in the novel and about the effects that terror has on the individual and the larger community as a whole. Also, talk about the ways in which private terrors are different from communal ones. Are the effects of one perhaps more devastating than those of the other?

8. Shadow Man also touches on the themes of power and powerlessness, vulnerability, and exploitation. In what ways do the powerful exploit the vulnerable in the novel? What kinds of power do you see at work here, and what effects do they have—both negative and positive? When is power used for good in the book, and in what ways is it used for ill purposes? Also, are there ways in which the lines between perpetrator and victim get blurred in the novel?

9. Why does Ben keep his own secret hidden for so long? What finally causes him to confront his dark past? What effect does his silence have on his own life, his family’s, and his coworkers’?

10. In current popular culture, the detective is the new cowboy. As with the image of the cowboy in the early-to-mid-twentieth century, fictional detectives are often endowed with the qualities of masculinity deemed most valuable by society. This book, in many ways, is an investigation of masculinity—the strengths and weaknesses of the constructed concept of maleness. In what ways does Ben’s experience—and perhaps Natasha’s as well—attempt to confront problematic and perhaps destructive elements in our ideas about what makes a “man.”

11. The book suggests that we, as a culture, think about male victims of abuse differently than we do female victims. Discuss the reasons for this difference offered in the book—by both the victims and the community. Do you see any uncomfortable instances of conflation?

12. The book also brings up the subject of denial—both personal and communal. Discuss the various forms of denial portrayed in the novel and the fears or needs that feed them.

13. While Shadow Man was influenced by both the Night Stalker and Golden State Killer murder sprees, it was also inspired by the Penn State sexual abuse case. The book is an investigation into a series of murders, but it is also an investigation into a place and time. What insights might the book offer about the ways communities deal with their own dark secrets?