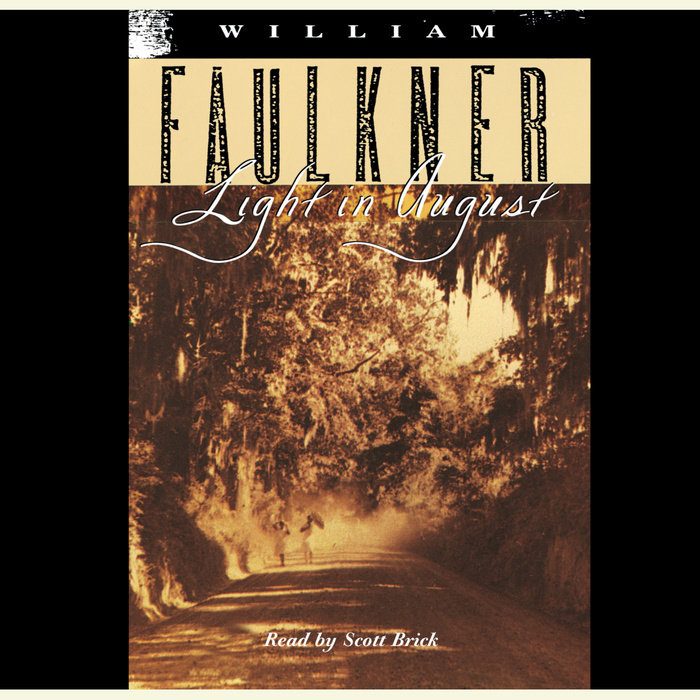 1. The opening chapter belongs to Lena Grove as she arrives in Jefferson. What are the core elements of Lena’s character? Does she change during the course of the novel? If Lena has a symbolic function, what is it? What, if anything, does Lena’s background explain about her character, motivations, and desires?

2. The story contains many flashbacks, shifts in temporal sequence, and shifts in the narrative point of view. How does the book’s structure affect the reading experience? In terms of prose style, what is most striking about Faulkner’s use of language and imagery?

3. Byron Bunch is a man who has tried to live in such a way that “the chance to do harm could not have found him” [p. 77]. He says to Hightower, early in the story, “a fellow is more afraid of the trouble he might have than he ever is of the trouble he’s already got. He’ll cling to trouble he’s used to before he’ll risk a change” [p. 75]. Yet Byron changes more than any other character. He falls in love and, in pursuit of Lena, completely alters his life. Is Byron an admirable character, and if so, how and why?

4. The critic Malcolm Cowley felt that the novel “dissolved too much into the three separate stories” [The Faulkner-Cowley File, p. 28] of Lena, Gail Hightower, and Joe Christmas. Would you agree or disagree? Do their stories come together, and if so, how? Do these characters belong in the same novel?

5. Byron says, “A man will talk about how he’d like to escape from living folks. But it’s the dead folks that do him the damage. It’s the dead ones that lay quiet in one place and don’t try to hold him, that he cant escape from” [p. 75]. How does this statement relate to Joe Christmas, Joanna Burden, and Reverend Hightower? What are the various ways in which their enslavement to “dead folks” and past history determines their lives?

6. Before he kills Joanna Burden, Joe thinks, “Something is going to happen to me. I am going to do something” [p. 104]. Notice the passive and active modes of those two juxtaposed thoughts. Does Joe actively seek the fulfillment of “something awful” that he believes to be his fate? The narrator tells us, “He believed with calm paradox that he was the volitionless servant of the fatality in which he believed that he did not believe” [p. 280]. Faulkner seems to be interested in the relationship between volition and passivity in the novel; how do you understand the “paradox” of will and fate as it embraced by Joe Christmas? Are other characters similarly caught between will and fate?

7. One of Faulkner’s central preoccupations in Light in August is the legacy of Calvinism in the American psyche. In which characters is this stringent, unforgiving strain of thinking most apparent, and what are its effects? How are guilt and Calvinism linked?

8. In Light in August, womanhood and female sexuality are often described with a combination of fascination, desire, and loathing. Does this psychological attitude originate in certain characters, or does it seem to emanate from the author? Consider this question in the context of the following quotes: “He began to look about the womanroom as if he had never seen one before: the close room, warm, littered, womanpinksmelling” [Doc Hines, p. 132]; “the bodiless fecundmellow voice of negro women murmured. It was as though he and all other manshaped life about him had been returned to the lightless hot wet primogenitive Female” [Joe Christmas, p. 115]; and “Now and then she appointed trysts beneath certain shrubs about the grounds, where he would find her naked, or with her clothing half torn to ribbons upon her, in the wild throes of nymphomania” [Joanna Burden, p. 259].

9. As he takes a whipping from his foster father, Joe’s body “might have been wood or stone; a post or a tower upon which the sentient part of him mused like a hermit, contemplative and remote with ecstasy and selfcrucifixion” [pp. 159–60]. Why does Joe seek punishment from McEachern and reject the love offered by McEachern’s wife [pp. 166–69)]? Why are the fanatical and sadistic patriarchs of the novel, like Simon McEachern, Calvin Burden, and Doc Hines, so powerful?

10. What are the most startling and memorable scenes in the novel? Are these scenes extremely visual in their effects? Do they seem appropriate to, or influenced by, the genre of film?

11. Chapter 5 is told from Joe’s point of view; what insight does the reader gain into Joe’s reason for killing Joanna Burden? Does he have a clear motive? Joanna is depicted as a masculine woman, a spinster, a Northerner and a nymphomaniac. What is at the heart of Joanna’s desire for Joe, and of his desire for her?

12. Critic Eric Sundquist has remarked that “violence and sexuality determine the contours of the South’s romance of blood” and that Joe is “a character whose very physical and emotional self embodies the sexual violence of racial conflict” [William Faulkner: The House Divided, pp. 89–90]. Discuss this yoking of violence, race, and sexual thinking in the novel, particularly as it is reflected in Joe’s relationship with Joanna Burden and in Percy Grimm’s murder and castration of Joe [pp. 464–65].

13. With Percy Grimm, Faulkner himself said that he had “created a Nazi,” a “Fascist galahad who saved the white race by murdering Christmas” [qtd. in William Faulkner: The House Divided, p. 93]. “I wrote [Light in August] in 1932 before I’d ever heard of Hitler’s Storm Troopers” [Faulkner in the University, p. 41]. Discuss the ways in which Chapter 19 explores the fantasies and fanaticism of both the individual and the group. Does Grimm intend to lead a lynching or to prevent one? Does Grimm function as the executioner whose fantasy is merely an exaggerated version of what the community also believes?

14. Joe’s life is figured repeatedly as a journey along a road; returning to Mottstown, Joe feels that “he is entering it again, the street which ran for thirty years. . . . It had made a circle and he is still inside of it” [p. 339]. Should we see a thematic link between Lena’s journey and Joe’s? How do their wanderings differ in spirit and in function?

15. Light in August is primarily a book about racial identity, race hatred, and hysteria. Faulkner commented later that Joe “didn’t know what he was, and so he was nothing. He deliberately evicted himself from the human race because he didn’t know which he was . . . which to me is the most tragic condition a man could find himself in—not to know what he is and to know that he will never know” (qtd. in Light in August and the Critical Spectrum, p. 1). Are the coldness and violence in Joe’s character explained by Faulkner’s statement? How does the reader react to Joe Christmas—with empathy, with distaste, with bewilderment?

16. In The Sound and the Fury Quentin Compson says, “a nigger is not a person so much as a form of behavior; a sort of obverse reflection of the white people he lives among” [p. 86]. Discuss the ways in which Joe Christmas functions among the white community as an idea, a symbol, a negative image of their own ideal selves, and not as a person. What is the effect of this function on Joe’s own subjectivity?

17. Chapter 19, which tells of Joe Christmas’s death and castration, is followed by a chapter narrated from the perspective of Gail Hightower which tells the story of his past life and his failures, ending in the present moment. What might Faulkner have meant to do by juxtaposing Hightower’s meditation with the horror that has come just before? What role does Hightower play in the novel?

18. A furniture dealer who gave Lena and Byron a lift in his wagon is the narrator of the final chapter, and their courtship is the subject of the comical tale he is telling his wife. Lena’s pursuit of the feckless Lucas Burch has also been a source of comedy. Why might Faulkner have chosen to end the novel on this note of optimism and good-humored comedy?