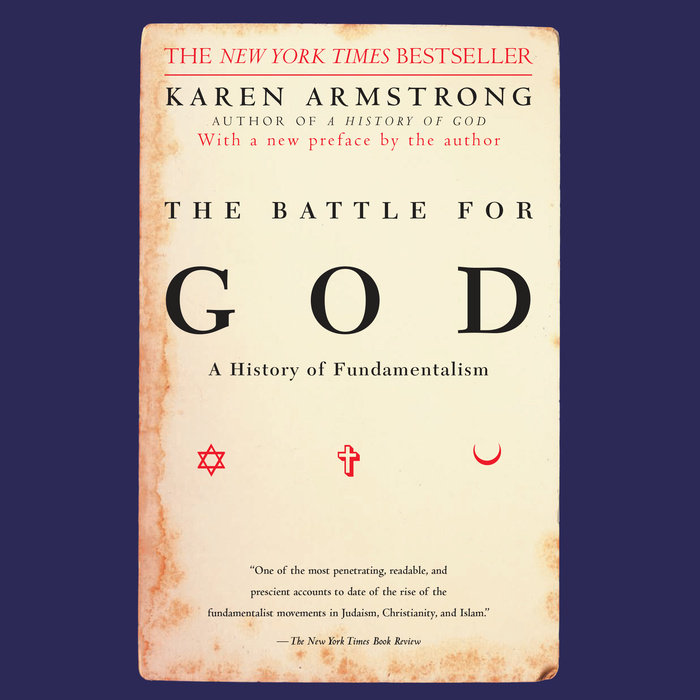 The Battle for God

1. Have you or someone close to you ever adhered to a religious group that Karen Armstrong would define as fundamentalist? Does her view of funda-mentalism "ring true" for you?

2. Karen Armstrong uses the terms mythos and logos to describe "two ways of thinking, speaking, and acquiring knowledge." Mythos is concerned with "the eternal and the universal," she writes, and logos is concerned with "ratio-nal, pragmatic, and scientific thought." How do these terms apply to your own experience of religious and secular life?

3. Armstrong points out that the first Grand Inquisitor, whose mission was to stamp out Judaism in Spain, was himself a Jew who converted to Catholi-cism. Do you believe that a convert is more likely to be zealous in his or her new faith than someone who was born into the same faith?

4. Were you surprised to learn that Islam treated Christians and Jews as a "protected minority" (dhimmi)? Did Armstrong's description of the history of Islam change the way you view the Islamic world as it is depicted in news media and popular entertainment today?

5. According to Armstrong, the events in Spain of 1492--the expulsion of Jews and Muslims--marked the beginning of "a new order" in world his-tory. She also finds history-changing significance in the rise of Napoleon, the industrial revolution, and World War I. Do you agree that these events changed the world as we know it?

6. In writing about modernization in the Western world, Armstrong points out that some scientists and scholars came to embrace the principle that "the only information upon which we could safely rely came from our five senses," and "anything else was pure fantasy." In their view, she writes, "[p]hilosophy, metaphysics, theology, art, imagination, mysticism, and mythology were all dismissed as irrelevant and superstitious because they could not be verified empirically." Does your own experience of life prompt you to agree or disagree with this point of view?

7. Armstrong insists that modernism, despite all of the material benefits that it bestowed upon humanity, was not a complete replacement for religion and spirituality. "Human beings find it almost impossible to live without a sense that, despite the distressing evidence to the contrary, life has ultimate meaning and value," she writes. What is your own view of the "ultimate meaning and value" of life in the modern world? Do you find meaning and value in life through religious observance?

8. "In their way, fundamentalists were ardent modernists," writes Armstrong. Do you agree that fundamentalism, as Armstrong defines and explains it, is a feature of the modern world and could not have existed in an earlier era?

9. "The death camp and the mushroom cloud," writes Armstrong, "are icons that we must contemplate and take to heart so that we do not become chauvinistic about the modern scientific culture that so many of us in the developed world enjoy." Do you believe that the benefits of the modern world outweigh such horrors as the Holocaust and the threat of nuclear destruction?

10. Armstrong argues that there is "a void at the heart of modern culture," which French existential philosopher Jean-Paul Sartre described as "a God-shaped hole." Do you experience such a void in your own life? If so, how have you tried to fill the "God-shaped hole"?

11. Armstrong holds out the hope that fundamentalists and modern secular societies can come to understand and live in peace with each other. "If fun-damentalists must evolve a more compassionate assessment of their ene-mies in order to be true to their religious traditions," she writes, "secularists must also be more faithful to the benevolence, tolerance, and respect for humanity which characterizes modern culture at its best." Do you see any specific ways in which "secularists" can express these qualities in a way that fundamentalists can understand them?

13. Has The Battle for God changed the way you understand the role of religion in defining and encouraging morality in public and private life? Has reli-gion played a positive or a negative role in shaping the world we live in today?

14. Does The Battle for God change how you feel about fundamentalism in reli-gion? In what way? Are you more or less sympathetic toward fundamen-talists than you were when you first picked up the book?