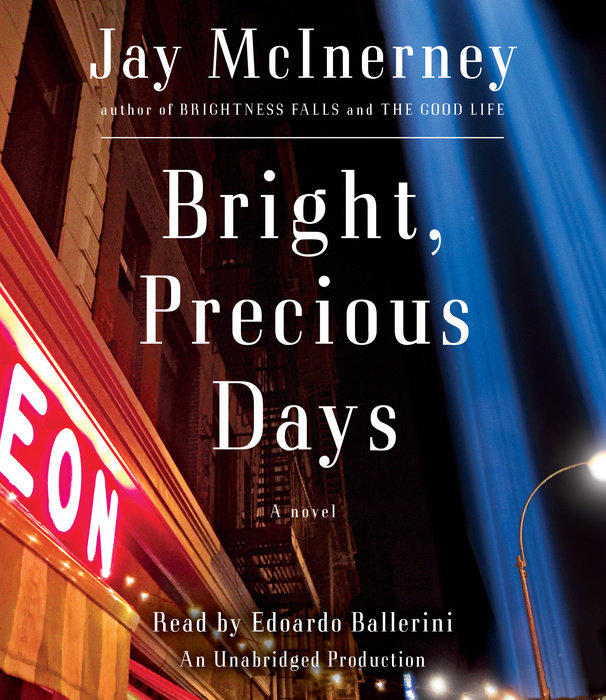 1. Describe the early courtship of Russell and Corrine Calloway. How would you characterize their relationship? How do their personalities shift or change over the course of the novel? What aspect of their marriage is strongest?

2. Marital fidelity, or lack thereof, is central to the plotting in Bright, Precious Days. As the number of affairs mounted throughout the book, how did they shape or complicate your understanding of each character? Which liaison surprised you the most? Consider the letter that Jeff wrote to Corrine, in which courtly love is explored. What does McInerney seem to suggest about the functionality of monogamy?

3. Jeff is introduced to the reader, strikingly, in the present tense. How is his presence felt throughout the book? How would you describe him, based on Russell’s account? Corrine’s? What did his personal letters reveal?

4. Describe the editorial relationship that Russell has with his authors. What is his main objective as an editor? Discuss the idea of ownership in relation to literature that has been touched by an editor’s pen. What does Jack’s letter to Russell imply about Russell’s editorial style?

5. Discuss how New York City functions as a character in Bright, Precious Days. What assertions can be made about New York pre- and post-9/11? What is “authentic” New York? How do Russell’s ideas about what it means to be a New Yorker frustrate Corrine?

6. The scene in which Hilary reveals that she is the biological mother of Russell and Corrine’s children sends shock waves that emanate throughout the novel. What scares Corrine most about her children knowing this information? How would you describe her as a parent?

7. Discuss the role of food and consumption in Bright, Precious Days. How is Russell’s interest in food and culinary culture described over the course of the novel? Why does their daughter’s interest in cooking alarm Corrine? How does class factor into body image concerns in their social circle?

9. Discuss Corrine and Russell’s TriBeCa living situation. Why is Russell so adamant about buying property? What appeals to Corrine about Harlem? How does their struggle to find an affordable neighborhood reflect the tides of gentrification inherent in the rise of urban populaces?

10. Issues of class consciousness run throughout Bright, Precious Days. How do anxieties about money and status plague Corrine and Russell’s relationship? With whom is Corrine most comfortable discussing money? How does the crash of 2008 affect the couple’s social circle?

11. Describe Corrine’s relationship with Luke. What attracted her to Luke initially? How does his personality differ from her husband’s? Were you surprised by her decision to remain with Russell?

12. How does the discovery of Corrine’s affair affect their children? When is Corrine’s guilt about it most apparent? How does her apology following the affair differ from Russell’s behavior after his dalliances?

13. Compare the lives of Jeff and Jack. What parallels can you draw about their ascensions to literary stardom? Their tragic deaths? How did Russell’s editorial input shape their success?

14. As Bright, Precious Days unfolds, instances of deception are untangled and revealed. Who is the most honest character? Which character’s secret was most surprising to you?

15. How do Russell’s ideas about Art and Love versus Power and Money echo throughout Bright, Precious Days? What do they assert about the relationship between art and commerce? How do they reflect the changing nature of New York City? Of Russell’s own ambitions?