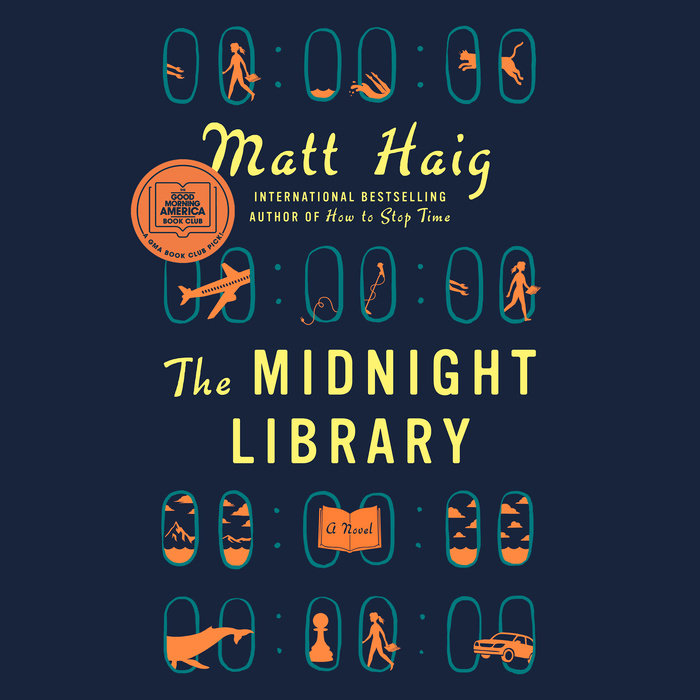 1. The Midnight Library is different for each person who enters it. Nora experienced it as a library because of the meaningful relationship she had with Mrs. Elm, her childhood school librarian. Later, we learn that Huge experienced it as a video store, with a cherished uncle instead of a librarian. What do you think your Midnight Library would be? And who would be there?

2. Nora experiences a number of alternate lives in which she achieves a great deal of success in one area of her life at the expense of all the rest, be it in music, swimming, or polar exploration. Do you think it’s possible to reach fame and fortune in a single field and still maintain balance with other areas of your life?

3. In the library, Nora learns that the life she gave her cat was one of the best he could have experienced. Are there any parts of your life that you feel could not be improved by living it differently

4. In her life before she finds herself in the Midnight Library, Nora gave up many of the pursuits that brought her joy because she didn’t feel like she could be the best at them. Do you think it’s understandable that she would have given these things up? Do you think that wanting to be the best at something can inhibit us from enjoying it?

5. Mrs. Elm showed Nora the Book of Regrets when she first entered the library, and Nora was overwhelmed by it when she first looked in. But as she experienced more and more lives, her list of regrets began to shrink. Do you think by considering the ways in which our lives might have turned out differently our regrets truly go away, or do we simply learn to live with them?

7. As the story progresses, Nora finds herself in lives that she could be more satisfied with than others that proved more difficult. Do you think you would be able to live as an alternate version of yourself? Would you want to?

8. Over the course of the book, Nora lives a whole spectrum of lives, some for minutes and some for months, but only at the end does time actually pass, and by the time she wakes up in her root life it is one minute and twenty-seven seconds past midnight and her outlook on life has changed entirely. What do you think this says about the speed at which we decide things about our lives and ourselves? Does it take a lifetime or a just few seconds?