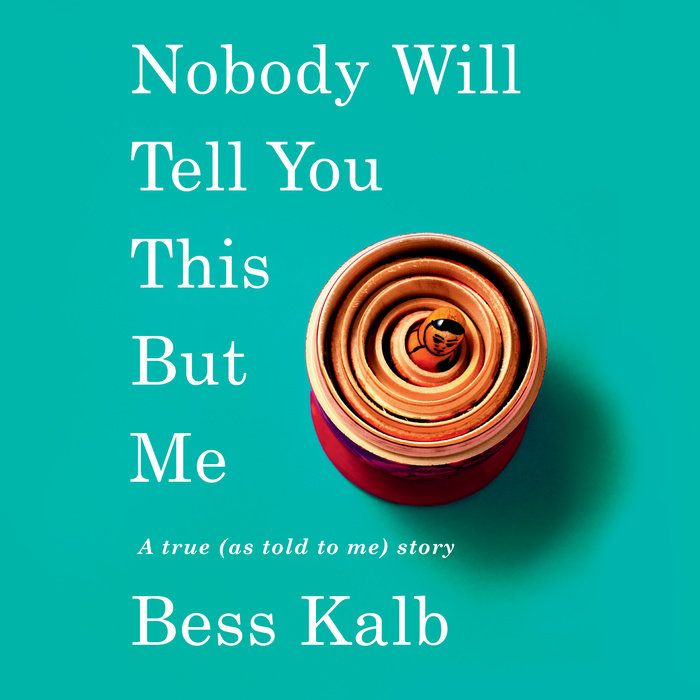 Nobody Will Tell You This But Me

1. Bess Kalb invents a new form of memoir with Nobody Will Tell You This But Me by narrating the story from her grandmother Bobby’s perspective. What did you think of this invented genre? How did this voice add to the story in a way a traditional memoir wouldn’t have?

2. Throughout the book, Bobby often gives Bess advice, some hilarious and some wise. For example, she says, “Bessie, if you try on a dress and you don’t immediately want to parade outside the dressing room and show it off to everyone in the store, take it off and forget it ever existed” (p. 40) and “when the world is cracking behind your feet, you keep walking forward” (p. 165). What is your favorite Bobby quote or advice in the book?

3. Does Bobby remind of you of anyone in your own life?

4. After Bobby tells the story of her mother’s journey from Russia to the U.S., she says: “I thought of it as my story. And when I told it to your mother, she’d think of it as her story. And when she told it to you, you’d think of it as your story. It’s her story, Bessie, but it belongs to us. When she stepped off the boat, we all became possible” (p. 33). How do stories of our ancestors affect us and our identities? What can we learn about immigration to the U.S. then and now from her journey?

5. Bobby describes her relationship with her daughter Robin as “ships passing” (p. 72). How would you describe their relationship? What did the role of motherhood look like at this time, and what do you think Bobby felt about fitting into this role?

6. Bobby compares her friend Estelle’s marriage with Robin’s first marriage. What does the book say about domestic violence? How are these two stories similar and how are they different?

7. Bobby says: “Bessie, beware of men who have gone their whole lives without hearing the word ‘no’” (p. 109). What do you think she means by this, and how do you think this relates to Estelle and Robin’s stories?

8. Discuss how Bobby and Robin’s relationship changed after Bess was born. Why do think these changes occurred?

9. Describe Bess’s relationship with Bobby. How does Bobby as a grandmother differ from her as a mother? Why do you think this is?

11. After Bobby passes away, Bess returns to the Plaza on the anniversary of Bobby’s birthday. What was your immediate reaction when you read this scene? How do you think places play a role in memory and grief? Can you think of a specific place that reminds you of a loved one?

12. In the final chapter “After Me,” Bess chronicles having her own son through Bobby’s voice and imagines what Bobby would have thought if she were still alive. Why do you think Bess chose to end the book this way?

13. The idea for Nobody Will Tell You This But Me came from when Bess wrote her grandmother’s eulogy from her grandmother’s perspective. Part of the eulogy is in the first thirty pages of the book. How can writing help one process grief? Do you find writing to be a healing exercise?