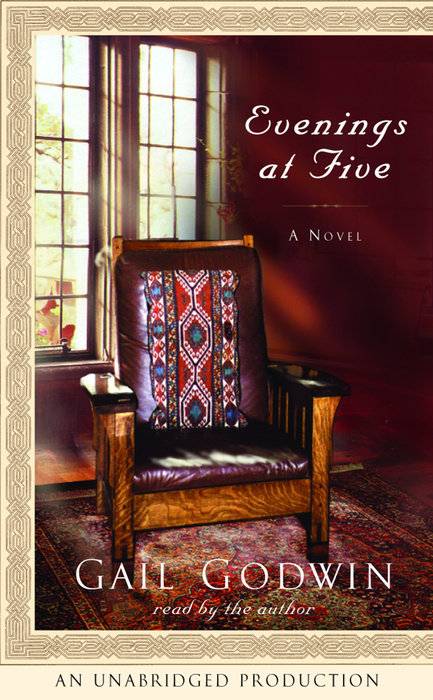 1. Let’s start with the very first sentence in
Evenings at Five: “Five o’clock sharp.” Do you
hear a bell tolling? What does this one sentence
tell you about what you’re about to read? The
phrase is repeated on page 29. How do you react
to hearing it again? Five o’clock is associated with
a ritual in Christina’s house. A ritual—originally
meaning a prescribed religious ceremony—has
taken on the meaning of a regular household activity.
Is there such a thing as a household religion
—and if so, what composes it?

2. Are stronger memories associated with rituals
than with other events? What kinds of experiences
make the strongest memories? What
kinds of sensations and associations does Godwin
latch on to as Christina evokes the cocktail
hour?

3. Are rituals necessary in helping us avoid
feeling vulnerable in lives easily dominated by
our own weaknesses? How does Christina use
rituals to counter her ritual alcohol drinking?

4. Some memories are “graven on the heart”
(page 16) and others strike familiar chords. Chapter
1 ends with Rudy answering Christina’s question,
“What are you thinking?” by telling her, “I
wasn’t thinking. I was hearing music.” Does
Christina attain this kind of sensitivity in a way?
Is what she hears on page 17 a kind of music?
To a certain way of hearing, is everything music,
including Rudy’s answering machine message
(pages 38–39), to which Christina applies the
Gregorian term melisma (an ornamental phrasing
of a word or syllable)? The last chapter, “Coda,”
reminds us that Godwin has composed a sonata in
Evenings at Five. In what ways can you sense or
hear a sonata in the novel?

5. Godwin says that, after writing the first five
pages of Evenings, she had tricked herself into a
new way of writing. What is that new way? To
get a handle on this, look at the kinds of sentences
she writes and at how one sentence connects
to the next.

6. By the end of chapter 2 of Evenings,
you realize that Christina is talking with Rudy,
who has died. Is such a conversation helpful,
or does it cause you to worry about Christina?
Your opinion will determine what you think
Christina’s fate will be in this story. See Rudy’s
posthumous conversation with Christina on
pages 97–98.

7. Look at how Godwin ends each chapter in
Evenings. Write down the ending sentences or
key clauses in succession on a piece of paper and
see how they tell the story.

8. What do you know about different grieving
ceremonies? Christina undergoes a few. What
should the purpose of such services be? Are they
effective? What do you think of the ceremonies
that Christina experiences? What is the art of
condolence letters?

9. What kind of a record of a person’s life is
left after his death? What kind of a story does
an appointment book tell? Evenings provides a
remarkably comprehensive account of the different
kinds of things that linger or last after
death—including junk mail. What are those
things? What is Godwin’s strongest case for eternal
life? Keep in mind her opinions on page 58.

10. In a .ctional world, memorable impressions
are symbols, key events are omens, and
coincidences are fate. In our lives, is there such
meaning? What is the meaning of Christina’s
temporary semiblindness? What about the sighting
of the bear?

11. On page 57, Christina discovers how much
she misses Rudy’s awful moments. Are there any
personality traits people exhibit that are not lovable
—perhaps shallowness, conformity, or lack
of personality? Does this relate to Christina’s
uneasiness with the paltriness of most confessed
sins in “Possible Sins”?

12. Godwin opens up a lot of space in her
novel for Gil Mallow. Mallow is the child of a
mother who had given birth to him because, at
.rst, she hadn’t known she was pregnant, and,
then, used her pregnant condition for her art.
Eventually, she rejected pregnancy-inspired forms
and artistically aborted the idea of Gil. Why is
Mallow such an important person in Godwin’s
and Christina’s universes? How much are you affected
by the heartbreaking episodes in Evenings?
Christina sobs, cries, and hoots with laughter at
various points. At the end of chapter 3, she says,
“My heart is broken.” As dream analysts say after
hearing about agonizing dreams, what were the
feelings you had witnessing the episodes?

13. What percentage of your life do you think
is dominated by memories rather than your engagement
with present needs? How much do you wish to stay connected with the past? Why?
Is it useful to have talismans, such as Rudy’s
metronome, or passwords, such as the one
Christina holds on to in “Possible Sins”? What
role does Bud play throughout Evenings? Do cats
have some special supernatural connection?

14. Godwin’s novels always include the names
of books that characters are reading or to which
they are referring. They provide a subtext to the
story. If you’re ambitious, make a list of the book
references in Evenings, .nd out what they’re
about, and see what they say about the novel.

15. What does Christina mean when she says
(on page 113), “I have to make the crossover between
image and presence”? She then says, “I,
the visual one, now have to rely on sounds.” Are
visuals associated with image, and sounds with
presence?

16. You have an opportunity, now that Godwin
is including her Christina stories with Evenings at Five, to witness the growth of a major work. How do the stories connect to
Evenings? What major themes are developing?
Where are the gaps? What additional stories
would you like to see?

17. At the end of “Possible Sins,” Father Weir
suggests using a favorite food as a password for
spiritual communication rather than a memorable
piece of wisdom. What information do you
use for private passwords in e-mail accounts or as
personal information to con.rm your identity
with credit-card companies? What really sticks in
your mind?

18. What fairy tale does “Largesse” evoke? Do
modern women have to create a body of stories
to counter the messages of traditional fairy tales?

19. Both “Largesse” and “Old Lovegood
Girls” involve fellow airplane passengers who
play roles in ushering Christina into her story.
Are each of the Christina stories a mythological
journey? If so, what insight or dividend does
Christina retrieve from each descent?

20. How does Godwin struggle with the idea
of the ingénue? In her interview, she says that
she had never been an ingénue. Yet in “Old
Lovegood Girls,” she acknowledges an attraction
to the old Southern way of life and the
importance of such a concept to her father. At
the heart of this issue are Christina’s views on
goodness, expressed in her essay for Miss
Petrie. Does Christina’s belief in goodness,
even though it’s a revision of the traditional
model, indicate an attachment to the old ideal?
Or does Christina reject the ideal as a product
of the “market for brides”? How do you think
Godwin views marriage?

21. In “Waltzing with the Black Crayon,”
Kurt Vonnegut issues some rules for writing. Do
you agree with them? Do you have a list of
rules?

22. In what ways is “Mother and Daughter
Ghosts, A Memoir” a ghost story? Why does
the term ghost apply to the daughter as well as
the mother?

23. What is it that causes Godwin to slip into
the role that attaches to her at the conference in
“Mother and Daughter”? Was Godwin
looking for a way out of what had been developing
at the conference? What might have been
and what were her ways out?

24. What do Godwin’s and her mother’s
imagination exercises say about them at the moment
they compose them?

25. “Mother and Daughter” contains a powerful
revelation—the mother’s admission of
what she had witnessed and redressed at her father’s
funeral. It comes under the heading “the worst thing that had ever happened in her life.”
What function does revelation play in Godwin’s
reaction? What kinds of questions elicit revelations?
“What is the worst thing?” is one. Another
kind of revelation leads off “Waltzing
with the Black Crayon.” What are the different
kinds of revelation?