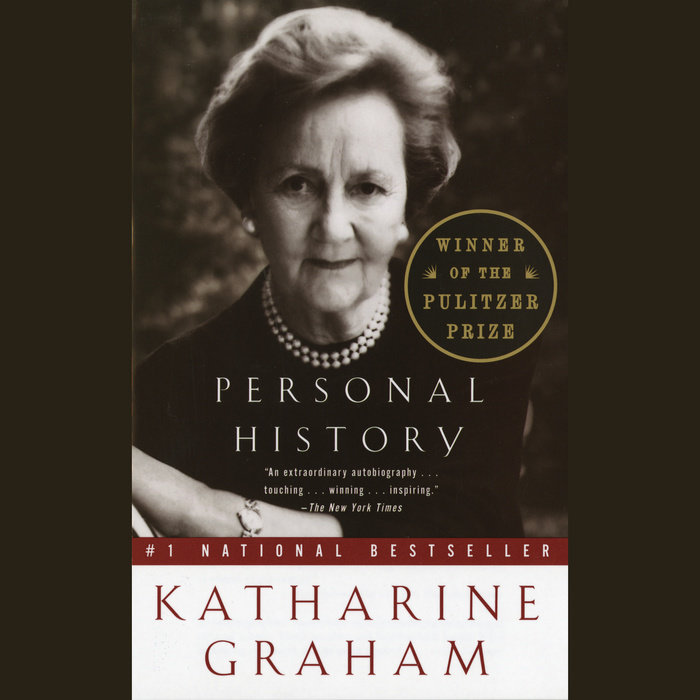 1. Graham spent her childhood and adolescence in a household that revolved around the needs of the parents rather than those of the children. It wasn't until she was two and a half that she was first mentioned, in passing, in her mother's diary--"The babes (Bill and K) take some of my time this week" [p. 27]--and when her parents moved from New York to Washington, the children remained behind with a nursemaid and governess for the first four years. What long-term effects, if any, did this parental neglect have upon Graham's life?

2. Of her father's passing the Post to his son-in-law rather than to his daughter, Graham notes, "Far from troubling me personally that my father thought of my husband and not me, it pleased me" [p. 149]. Why did Graham and many other women of her generation have this point of view? At the time, her father explained that "no man should be in the position of working for his wife" [p. 181]; how would the marriage have been affected if Katharine Graham had been chosen to run the Post?

3. Eugene Meyer believed that social responsibility accompanied the privileges of wealth. Does the sense of public duty that Eugene Meyer passed on to his daughter strike you as unusual? He also believed that a newspaper's first duty was to serve the public interest, not the political ends of its owner. How closely did Philip Graham, and later his wife, adhere to these precepts while at the helm of the Post?

4. Hardly a conventional woman in her own day, Agnes Meyer was ambitious, politically involved, intellectually driven, and not at all "nurturing" of her children. In what ways did her mother shape the person Katharine Graham was to become?

5. What does Graham's description of the heated political argument that delayed her wedding ceremony indicate about the role of politics in her married life? What impression do you gain from the narrative of Philip Graham's political agenda and his influence upon Presidents Johnson and Kennedy? What impresses you about how Katharine Graham handled herself in friendships and business dealings with men in power? Do you think that Katharine Graham would have made a good political figure herself?

6. Graham writes of her relationship with her husband, "I literally believed that he had created me, that I was totally dependent on him, and I didn't see the downside at all" [p. 309]. Was this a happy marriage up until the time when Philip Graham's illness became obvious? Or do you agree with her friend's assessment that it was "good" for her that he left [p. 309]?. Was her continued loyalty to him, even after he left her for another woman, misplaced? How would you characterize Graham's account of their separation and her portrayal of her husband's mistress?

7. Three major crises punctuate Graham's account of her years at The Washington Post: the decision to publish the Pentagon Papers, the handling of the revelations of the Watergate affair, and her dealings with the pressmen's strike. How do these three events show the quality of her leadership? Her ability to react under extreme pressure? Is there anything in her handling of these situations that you disagree with? In the pressmens' strike, she was blamed for the suicide of one of the workers. Is there any justification for this?

8. The reader will not learn much from Katharine Graham about what it's like to live with millions of dollars at one's personal disposal. What role does Graham's inherited--and later earned--wealth play in this narrative?

9. Does the couple's attempt to conceal Philip Graham's breakdown strike you as indicative of a social stigma attending mental illness that our society has since outgrown? Was the self-imposed isolation that Katharine Graham endured at the time, as his sole confidante and support during the course of his illness, worthwhile? When she writes of herself and her children as "enablers" [p. 331] of her husband's actions, what does she mean?

10. In any memoir, the writer is faced with looking back at the past and at actions that seem, from the present venue, regrettable. What is the role of self-criticism in this memoir? Do you agree with Graham's belief that to have gone on a cruise after her husband's suicide was the wrong thing to do, since it meant that her two youngest sons had to deal with the aftermath of their father's death on their own? What other aspects of her life would she change, do you suppose, if she had the chance?

11. Are you surprised at how much social contact there was between the Grahams and such figures as Presidents Johnson and Kennedy, Henry Kissinger, and George Shultz, etc.? Is your view of these well-known figures changed at all by seeing them through Graham's eyes?
How well do you think that she dealt with the wrath of Richard Nixon? How do the revelations in this book change your preconceptions about the relationship between media and politics in this country?

12. Philip Graham's suicide is clearly a turning point in his wife's story. Is she, in a sense, a different person once she goes to work at the Post? The episode of his mental illness and its aftermath encapsulates many of the recurrent themes in the work, especially the competing obligations Graham felt as a private woman versus a public one. How well does she deal with the exposure that comes with being in such an elevated position? How well does she balance the needs of home and of work? Is this a story of a person who was to find her real fulfillment as a working woman, but who never would have discovered that if she had remained at home?

13. Although Katharine Graham did not at first identify with the aims of the feminist movement, throughout her career she found herself confronting a good deal of gender-based discrimination and prejudice. For instance, she was characterized as being a "'house mother and cheerleader'" for the company [p. 432]. What were the particular challenges facing her that a man in her position would not have had to confront? Would you consider Graham a feminist?

14. Graham identifies her husband as the energetic partner in the marriage, the one who was fun to be around, while she herself was "the foundation, the stability" [p. 250]. Is this situation--the mother feels herself to be "boring" and relegated to the background, but nevertheless is relied upon to manage the family's life--still typical of many families? Has the women's movement significantly affected gender roles in most marriages?

15. Many celebrity books in this country are ghostwritten, and clearly Katharine Graham did not have to take on the enormous labor of writing such a lengthy book herself. Why do you suppose she chose to do so? What does she achieve by having done so? What stylistic and tonal qualities of her writing contribute to your sense of Katharine Graham's presence, personality, and character?

16. "I suppose that, without quite realizing it, I was taking a veil" [p. 339]. How do you interpret this description of what it meant to Graham to take on her husband's job after his suicide? Elsewhere, she writes of being married to her job. Do you think that she would have accomplished what she did had she married again?

17. Katharine Graham found a truly productive partnership with Ben Bradlee; in many ways he seems to have been an integral part of her success at the paper. Why do you suppose they worked so well together? To what degree is success dependent upon working with the right people, or learning how to deal with less sympathetic people? To what degree is successful management determined by finding the right balance of personalities in a working environment?

18. In any autobiography some episodes are emphasized while others are muted. What parts of Graham's life are underplayed in this memoir? Do you sometimes find yourself wanting to know more about certain aspects of her life? What might explain or justify these omissions?

19. While the tradition of autobiograpy by men in public life is well established, that of women is far less so. If you have read recent examples--those of Colin Powell and Robert McNamara, for instance--how does Graham's narrative follow the pattern established by male writers? What does it owe to the emerging tradition of writing about female experience? What are the differences, if any, between the two?

20. Though they are nonfiction, autobiographies can be compared to novels that follow a character's education, development, life story--novels like Jane Austen's Emma, George Eliot's The Mill on the Floss, or Charles Dickens's Great Expectations. How does Graham's narrative compare to these or similar novels you've read? How would you characterize the movements of its "plot"? What is the effect upon you as a reader of the story as a whole?

21. Graham often mentions the fact that she lacked confidence, even after having reached a level of achievement that few people--men or women--ever do. Does she come across in her writing as a woman lacking in confidence? Is this, at bottom, a problem shared by most individuals, no matter how successful and no matter their sex? If not, how is Katharine Graham's lack of confidence specific to her sex and her generation?